Billy asked me to write more comments in his articles, I think he feels slighted, lol… So, he asked, and now I will comment my heart out. Just like I asked Billy Beer to write a Fanboy Fail for Fanboy Fail Fridays! And so he did!

Billy went for a triple play, well what’s the word for four? Quintuple? I dunno. Anyway, he was pretty much one for four. LOL… Doh!

Check out Billy’s Fanboy Fail after the jump!

Welcome back to Billy Beer’s Bar Stool!  Well, Mike has been asking for some Fanboy Fails, here you go.  It’s not a total fail day 1 for 4.  I mean if I were playing for the Yankees, I would be batting better than most of their team (note: I’m a HUGE Tigers fan 🙂 so any chance to rip on the Yankees….) But, the people that I was after today, I thought I would do a lot better.

(Editors Note: The Tigers? Really Billy? and this is coming from a man who lived in Detroit! M-)

First stop we’re going for a back to back with Michael Chiklis and Stephen Amell.  Michael is the first one on.  Kind of like Matlock, The Comish was a guilty pleasure of mine, and who didn’t like The Shield?  Let’s not forget about Fantastic 4 :/  I’m running a little late, and when I get there, he’s already on stage! 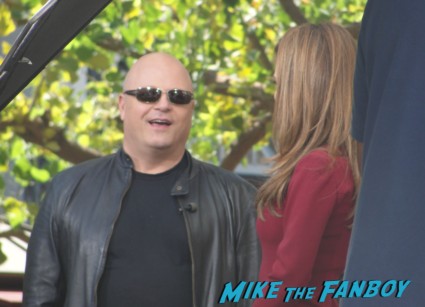 CRAP!  Luckily, there are not a lot of people here.  I get into the second row.  He and Maria are talking about his new show Vegas, but I’m a little distracted by something else 🙂 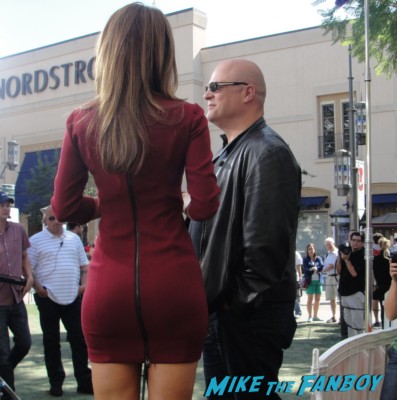 C.B. gets there and I give him his pictures.  They’re about finished and I make my way over to the end of the stage.  I see C.B. has a little better spot closer to the stage, but I’m not worried.  Well, I should have been.  He signed a couple of things really quick and was off.  Seriously?  There’s only like 5 of us asking for autographs.  Grrrrrr.  Then C.B. is nice enough to tell me I was standing in the wrong spot.  Well if you knew where to stand why didn’t you tell me.  Double Grrrrrr!  That’s OK, I still have 3 other people on todays list.

And next up is Stephen Amell.  Now I was hoping to get Stephen at Comic Con, but there were other signings going on at the same time, so I missed him.  He’s the new star of the show Arrow. 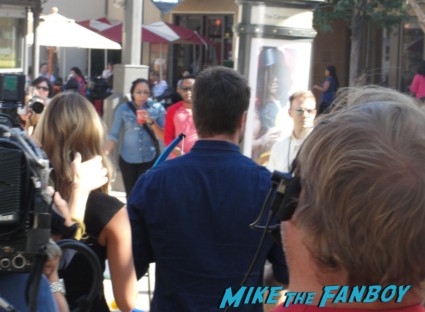 If you get a chance, check it out, not bad!  This time I position myself in a better spot.  They have someone else interviewing him.  Bye Maria 🙁  They talk about the show, and then do a little archery competition 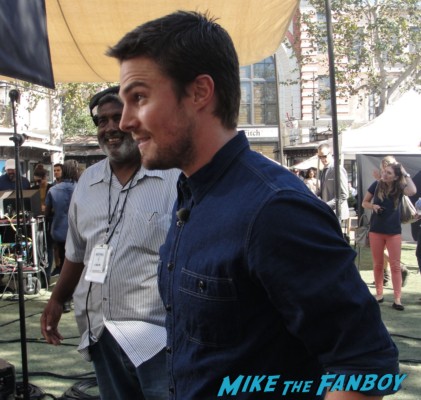 Finally they are finished.  C.B. calls for him.  He give him the “wait a second” look, which is all C.B. gave him before he called for him a couple of more times.  Please don’t piss this guy off……Nope, he comes over and is super nice.  We tell him we can’t wait for the show and thank him for signing.  Next he took some pictures with us, and he was off. 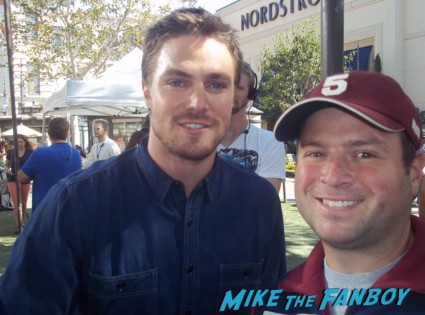 (Editor’s Note: I’m a bit jealous of this one! I’ve wanted Stephen for a while now and wasn’t able to head down! Dammit! M-)

Next we go for Will Arnet and Demi Lovato.  For those of you who don’t know, I am a huge Arrested Development fan

( Note: someone who has his own blog site needs to go back and watch this show! )

So I’ve been working on a cast photo for a while.  Surprisingly, I still need Will on this.  I just always seem to miss him.  So I have high hopes for this one.  Demi would just be an added bonus.  I’ve never gotten her before either.  There are a number of people here today.  A few crazies, it’s getting worse and worse every time I go there.  I wish people would just chill the heck out. If they come over, they’re not going to stop a third of the way down unless their name is Kristen Stewart.  Ugh.

Both Will and Demi don’t sign on the way in, not really even a wave from Will, and Demi got curbside service right up to the door.

Will is the first to leave.  We all scream for him, but nothing.  Seriously?  I’m guessing cause there was so much press there he didn’t want to come over.  I’m sure someone would have mentioned the divorce.  Shoot!

Well I still got Demi.

We wait a little longer, and then here comes the limo.  It’s moving straight up to the door.  Really?  You’re Britney now?  I thought you were the nice one.  Paula Abdul signs!  Nope.  We yell as much as we can, but she waves and jumps right in the limo.  I’m standing there in disbelief that neither one of them signed.  Thank you for letting me waste my time here.  Could have caught a few happy hours near by.  Grrrrrr.