It’s interesting, generally speaking the directors I’ve met have been so much nicer than actors. I can only assume it’s because they don’t get hit up as much as the actor’s do. However, I love getting directors to sign, it’s their vision on the screen and they are men (or women) behind the lens.

Jack headed out to a Q and A by Flight director Robert Zemeckis and well… Let’s just say that’s the subject of this weeks Fanboy Fail Friday! Doh!

Great Scott! Awards season is officially here and films are already taking home some hardware for the holidays. As filmmakers and cast rush around the United States, a very selective few are able to meet Awards contenders before “The Big Push.” Last Sunday was one of those opportunities, when Academy Award winner Robert Zemeckis appeared for a screening of “Flight” during a career retrospective in Santa Monica.
If you were alive during the 1980s, chances are you have been touched by one of Robert Zemeckis’ films. Whether it’s the classic “Back To the Future” trilogy, “Who Framed Roger Rabbit” or even “Romancing The Stone,” Zemeckis’ created some of the most enduring 80s films ever. In the early 90s, Zemeckis found his largest critical and financial success with the Academy Award winning “Forrest Gump,” which garnered him Best Director. Ever since he has primarily turned towards more special effects and motion captured films like “A Christmas Carol,”The Polar Express” and “Beowoulf.” 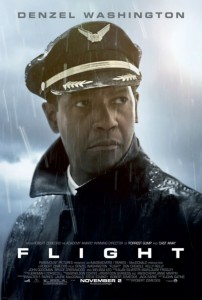 For the first time since “Castaway,” Zemeckis returns to live action filmmaking with “Flight,” starring Denzel Washington. Once the Fall film season came about I knew I wanted to see this film and it surely didn’t disappoint, but I’m jumping ahead of myself. In November, it was announced Zemeckis would be conducting a Q&A after the film and I decided to check it out. My friend Casey and I agreed to meet up for the film.

6:40- Parked and walking towards the theatre after receiving text saying he just arrived. 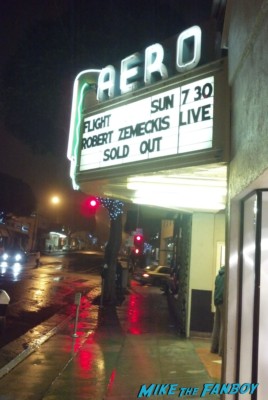 6:45- Notice everyone has been already let inside for the film. What happened to ONLY members being allowed in 45 minutes early? Did they change the rule or make an exception because of the weather. 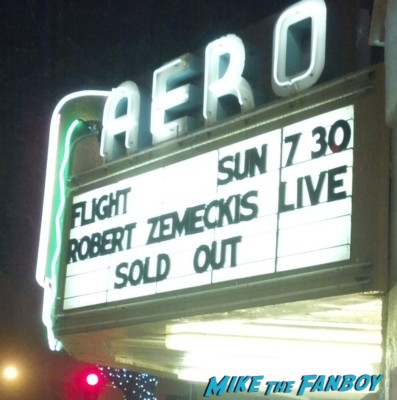 6:46- Bump into my friend Casey in the theatre and we decide to grab a seat in the fifth row. We begin reminiscing about previous autograph attempts and catch up since we haven’t hung out in forever.

7:15- As I’m discussing the horrible moderators for Q&A’s I mention one in particular and say he doesn’t “know shit and comes across as pompous” in a relatively quiet voice. A gentlemen with his girlfriend in front of us objects to me saying “shit” and asks me to refrain from cursing. My friend Casey and I look at each other in disbelief. I continue my conversation and after accidentally saying “shitty” to describe said moderator again, the guy turns around and says, “Thanks for not cursing.” Personally I don’t appreciate being told what I can and can’t say in public, especially when we’re about to see a film with explicit language and content, nudity and graphic depictions of alcohol/drug abuse. Funny thing is both he and his date left a little after halfway through the movie.

7:30- Casey and I enjoyed catching up when Grant, one of the programmers for the Aero, addressed the crowd informing us of some upcoming programming. Then the movie started shortly thereafter.

About ¾ through the movie, the crazy collectors (sorry, it’s obvious they attend ONLY for autographs and really don’t care about the films being shown) slowly trickled out to the lobby. My friend Casey decides to pop out while I still sit in my chair. A minute or so later, Casey returns and informs me his handler said “Bob will sign inside the theater.”

END- Hands down, “Flight” is one of the best films of the year and easily makes my Top 10 List of 2012. Denzel Washington gives an Oscar winning performance as an alcoholic pilot and the movies maintains your interest throughout. Kelly Reilly does a phenomenal job as Nicole and reminds me of Jessica Chastain (besides the red hair) with a subtle, yet moving performance you can’t stop talking about. However, Don Cheadle and John Goodman steal their scenes, particularly the latter. With maybe seven to ten minutes of screen time (if not less), Goodman OWNS his role and leaves you yearning for more. Honestly, from beginning to end, this film contains enough laughs and tears you should be quite satisfied after seeing it.

Geoff Boucher is announced as the moderator and we roll our eyes (well, maybe just me) because he was the “shitty moderator” I was discussing earlier. I hate pompous, pretentious posers who try too hard and Boucher’s inability to recollect trivia is frustrating to say the least. Call me biased, but Leonard Maltin and Elvis Mitchell conduct the best critic Q&A’s.

After a bunch of cliché questions, the Q&A ends and collectors rush the stage. However, everyone forms a pretty neat line in front of the stage leading towards one of the exits. Unfortunately, his handler and publicist along with Aero staff are blocking people. Zemeckis signs a handful of autographs (maybe five to 10) in the same exact place. 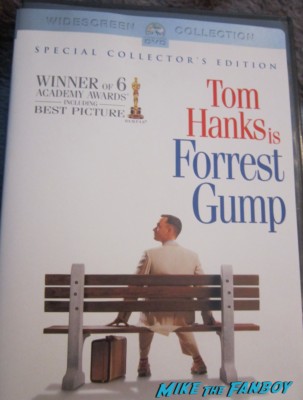 Zemeckis is then pulled away and we’re told by his handler, the same one who told Casey he would sign inside, he has to catch a “Flight.” Instead of signing down the line, he takes off and gives a simple wave while wearing a Smug smile to us despite being inches away (Yeah, I capitalized Smug on purpose). Pretty disappointing to say the least, especially since he is the director of two super kid friendly films “Back To The Future” and “Who Framed Roger Rabbit.” Just shows you that certain people might possess “nice” public personas, but are actually not fan friendly. Afterwards, we voiced our disappointment and headed outside where all the other collectors complained about Zemeckis. I only heard two got his autograph with everyone else being snubbed, including people on the outside. Until the next time, happy autograph hunting! 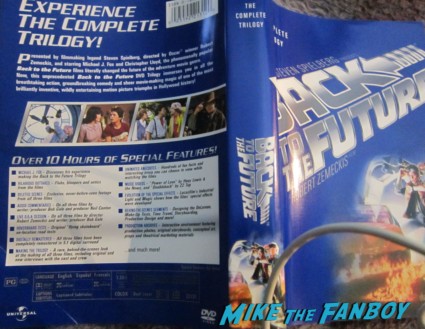 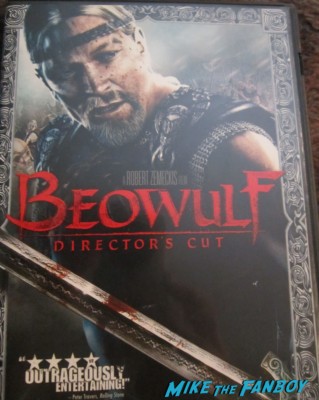