You know, sometimes you build up an event in your mind and you have this perfect picture of what it’s going to be like and then… Well, let’s be honest how many times does it really turn out the way we want it to? For me it’s almost never.

Today’s Fanboy Fail Friday comes to us courtesy of Ms. Pinky who is a devoted Duranie. She went to the John Taylor book signing hoping to score a photo with the elusive rocker. What did she get…? According to Pinky, “I got a rock!” Doh! It’s a sad woeful tale so buckle up kids!

Check out this fanboy fail after the jump!

Hello, my lovelies. Pinky Lovejoy here barely recovering from the tragedy that was the John Taylor book signing in LA last week. Now, as we all know, I love Duran Duran more than life itself. I have a Duran Duran tattoo (well, two if you count Nick’s autograph tattooed on my leg); I’ve seen them more times than I care to admit; and one of my biggest goals in life (don’t judge) is to get a group photo with the band. I know, I know, I should aim higher, but whatever. It’s what I want.

In the meantime, I’ve been working on getting individual pictures with the band and I was doing fairly well

(one with Simon LeBon, 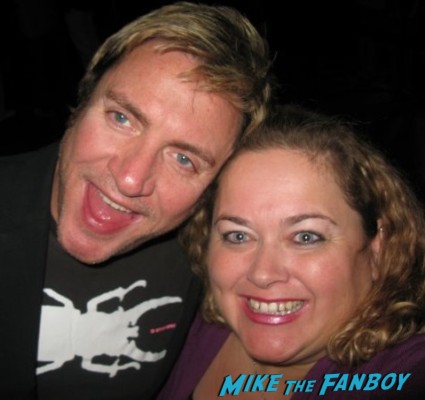 one with Roger Taylor, 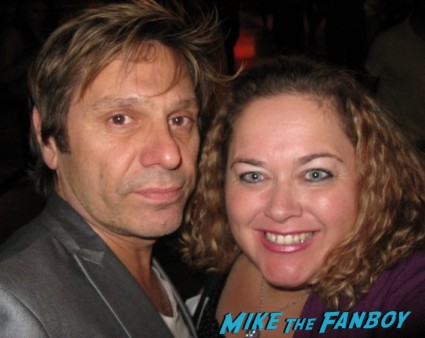 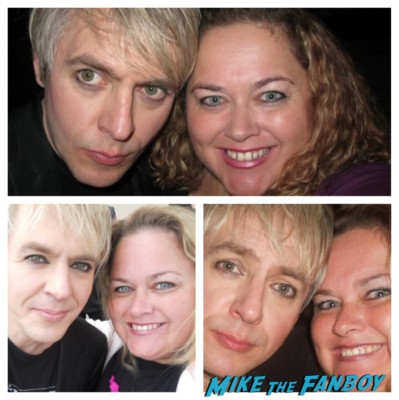 except for John Taylor. I have yet to get a picture with John. In case you aren’t hip to the DD scene (that’s what we Duranies call them), when you’re a Duranie, you typically love one of the band members and are loyal and true to them (for your whole life, but that’s neither here nor there). My true love in DD is Nick, of course, and has been since I was a wee small girl, but my second favorite is (you guessed it) John. Fine, if you must know, my personal hierarchy goes Nick, John, Roger, and then Simon (Andy isn’t even on my list because I never liked him and after reading his horrible book I like him even less. Plus, he left the band, so it doesn’t even matter. I don’t have to like him if I don’t want to.) 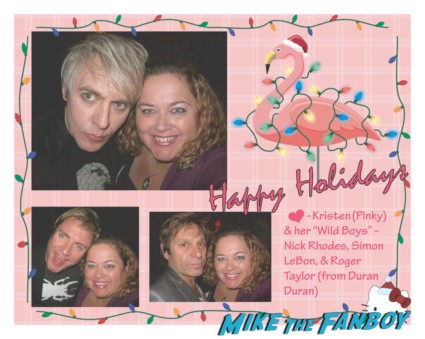 Knowing this, you can imagine how excited I was to learn that John Taylor himself had written a book and would be doing book signings to promote it. I waited with baited breath for the LA date to be announced and when it finally happened, I ordered my ticket in two seconds flat. Here’s where it gets interesting – to attend the signing, you had to pay $15 to enter. I figured this was to guarantee there’d be enough room with how crazy Duranies can be, so I didn’t really mind paying the $15 even though it didn’t include the book (which was another $28). Fine. Whatever. Now, I don’t go to a lot of book signings. I don’t care for them and I don’t like the pictures-over-a-table, so on the rare chance I do go, I make sure to wait outside and try to get a picture there first. I didn’t do this with John, however, because the voicemail message left by the bookstore said, “Please don’t bring a camera. Mr. Taylor’s people will be on-hand to take pictures of you while you get your book signed with Mr. Taylor.” OK, great. I knew it was going to be an over-the-table-picture, but because I’m desperate for a picture with John, I’ll accept it. In the weeks before the signing I studied the other signings he’d been doing in the UK and New York on Facebook and Twitter and noticed a lot of photos where both he and the person getting the book signed were looking and I took this to be a good indication of how it would go down. 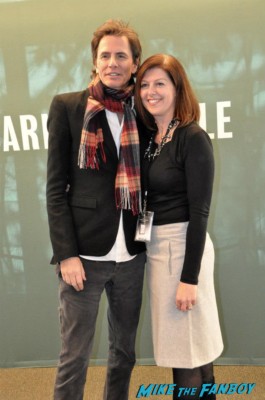 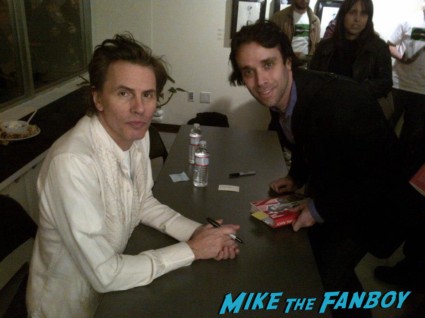 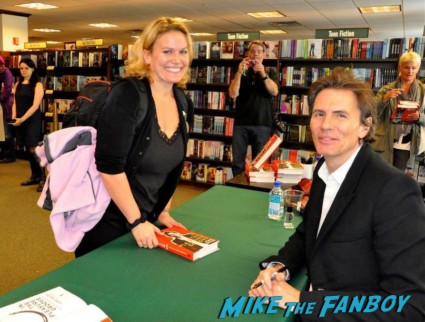 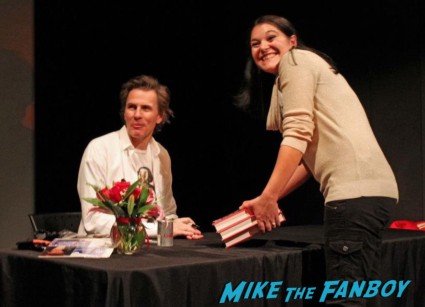 Sadly, I was wrong.

I should have known there’d be trouble when the sold out event suddenly decided to sell “overflow” tickets the morning of the event for $15 (same price we paid), but instead of being in the “main room” you’d be in an overflow room watching the Q&A on a monitor. When we arrived to the venue, we were given a pink wristband or a purple one. While the main room seemed to be a better option, we learned that the overflow room would be getting their books signed first and then the main room would come in after. Um, what now? That didn’t seem right. My friend wanted to do overflow, but I was being stubborn about the main room. 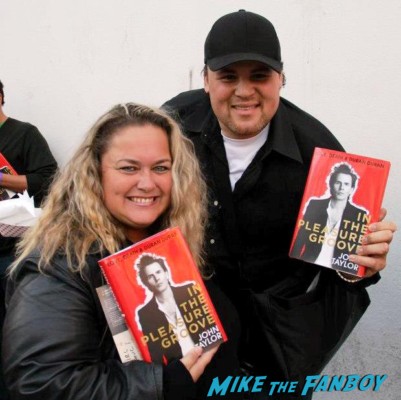 Turns out it didn’t matter because once we got into the venue (held at Cinespace on Hollywood Blvd.) we saw it was a disaster. The place is usually a bar and it should NOT be used as a book signing place. There is no room, no lighting, and a very poor sound system. The restroom was (shudder) co-ed. Yeah. Fun times. 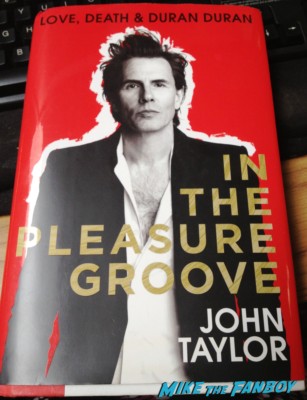 Although I’d bought my book ahead of time (at Book Soup like they said I had to), apparently that wasn’t necessary, since they sold books there AND also allowed books in from everywhere. Strike two. I made the mistake of deciding I needed another one for my sister for Christmas (since John is her #1 in DD) and ended up standing in a line longer than you’d ever believe. It wrapped around the cramped quarters and then doubled back while people were moving around all over trying to figure out where to go. It was miserable. I hated every second of being there. I was separated from my friend, the lighting and smells gave me a headache, and I was surrounded by super annoying people. You’d think I’d feel united with them knowing we share a love for DD, but for some reason I wasn’t feeling love that day. It was just hate. Still, if I could just get the book and get my picture, all would be right with the world.

The line for the book took so long (read: an hour) that the Q&A started while I was still checking out. I missed John come in; I missed the beginning of the talk; and there was no sound out where they were selling the books. You could see him on a screen, but no sound. When I finally got to my seat, the sound system was terrible. You could barely hear and it was standing room only. Obviously they oversold the place, so I’m not sure why the overflow was necessary. Halfway through the Q&A my friend and I decided to go into the overflow room and line up for the book signing since we couldn’t hear anyway and by that point I wanted to get out of there as quickly as possible. As we were fourth in line, we thought it might bode better for his signature and the picture. Wrong again. Now, maybe I was spoiled because I’d just gone to the Andrew McCarthy book signing and he was a joy – he got out of his seat and posed with everyone. He was happy and signed whatever we wanted. I don’t know what I expected, but it wasn’t what I got. See, I’d been reading John’s book and I absolutely LOVE it. I think it’s brilliant (and I’m not just being biased – it is amazing). In it he talks about forming Duran Duran and how he loved watching musicians growing up and what a fan he was – how he got pictures and autographs with his favorite musicians. How could someone like that NOT want to give their fans what they wanted?

Here’s the thing – I realize Duran Duran is huge and has been for 30 years. I realize it must be annoying to get asked to do pictures and autographs and all that jazz. At the same time, I just paid $15 to get into a miserable event and ended up buying three books (two before the event and one at the event) which were $28 each. I don’t think that wanting a picture is beyond the realm of possibility. Right before the signing started, they announced that John’s book was about to be #6 on the New York Times bestseller list. We all cheered. We were thrilled. I thought for sure this would mean a great encounter with John. Again, I was wrong. As the signing started, there were a bunch of “official” people yelling at the line to keep their cameras away. We brought up the picture thing (how they said they’d take them) and they looked clueless. They said there were too many people, they oversold the space, they needed to get through the line. Um, how is that my fault? And don’t they know how many people they can fit? I watched the first girl go up. No picture. No looking. Hmmph. 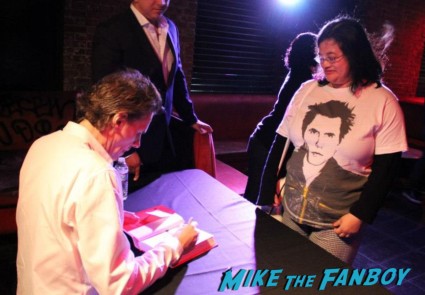 The next person went up. Same thing. 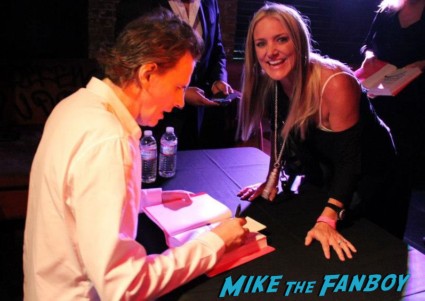 The next person. Same thing. Finally, it was my turn and I was crazed. I could see a photographer there, but I wasn’t sure pictures were being taken. If they were, all I could think was, “Turn your head, John!” I wanted to say so many things to him. How much I love the band. How beautiful and wonderful his book is. How much I enjoy watching him onstage because he looks like he enjoys it so much. How much I love following him on Twitter. What I actually said was, “Can you please turn your head?” As he signed my two books, all he said back, in a rather gruff manner it seemed, was, “They’re taking pictures.” I said, “I know, but can you look?” At that point he looked, but it was too late. I got my two books back and noticed he just signed them with “John” – not even a courtesy T! 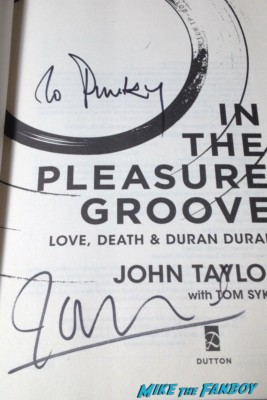 Even worse? When they finally posted the pictures on Facebook (which felt like a million years later), they didn’t post my picture. I didn’t even get a crappy picture! ZERO! NONE! I started crying. I was so sad. All I wanted was one stupid picture with John Taylor, preferably looking, but if I had to, I’d take the signing one and at least we’d both be in it. I told Mikey about the fail and he suggested I write it up. When I went to get examples of pictures, I found they’d posted more and – happy day – I finally got one (!), but it is, as expected, terrible. It’s me begging him to look and him ignoring me. 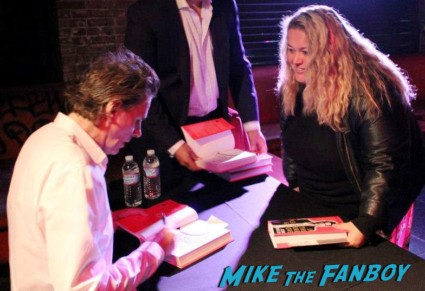 If you look at the history of his signings, he looked up a lot at the first few, but from LA on and he doesn’t look up anymore. I’m sure he’s tired. But, he also sold a ton of books and I think the organizers could have arranged it where you step up, look up, get a picture, get a signature, and be on your way. It doesn’t have to take a lot of time if they organized it correctly, but they didn’t. They did it in the worst way possible and they didn’t care. At all. I was SO disappointed by the end of it that I couldn’t even talk about it for days. I’d been looking forward to it since he announced his book last year and it was such a letdown. Maybe someday I’ll get my long desired picture with John Taylor. I hope I do. In the meantime, let’s just write this entire experience off as a fangirl FAIL.