Oh Harrison Ford! How you plaque me. Everyone was out for Mr. Ford the other day when he did an appearance at a local talk show. Now, here’s the thing. I didn’t expect it to happen, but there are times when you go out not expecting to get anything but in the off chance it happens and you are not there.

It’s almost like, getting dissed is better than Harrison Ford coming over and not being there. LOL… in fact,

I think I’ve only gotten an autograph from Harrison Ford three times. Sigh…

Let’s face it, he’s an icon a legend. If he’s out and about you have to try!

Suddenly Susan even took the day off from work in the off chance she could meet Harrison Ford. Doh…

Check out her amusing encounter after the jump!

Bitter, party of one! That’s me; especially after yesterday’s debacle for Harrison Ford after a talk show appearance. Ford is an icon. I get that and so I knew going in that the chances were slim to none. However, I and I alone decided the possibility was worth using half a vacation day in order to give it a go. My vacation days are earned, not automatic, so you really need to be someone I want in order for me to waste one. Harrison Ford, you are vacation day worthy – congratulations!

Unfortunately, he didn’t seem to appreciate or care about the elite group I put him in when he dissed the 60+ people waiting for him. I arrived to the venue at 11:32am and was number 18 in line. By the time Ford emerged, some 7 and a 1/2 hours later, I was number 39 in line. Say what? How can that be? All’s fair in love and autograph hunting apparently. 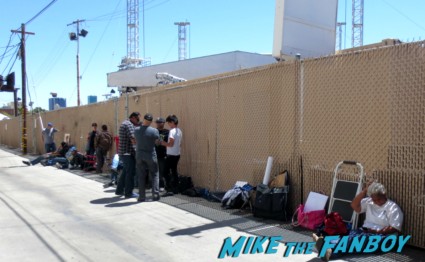 The people waiting were kept on the “single file” side and at least 12 barricades were lined up against us. At that point I knew then that there was no way in hell Ford was coming over to us. It probably looked like 200 people from his vantage point. I wouldn’t have fared any better had it been on the opposite side of the alley. I’d have to be right on the barricade, as my stumpy arms have no reach at all.

I was glad that he dissed the entire line. Had he come over and done half and stopped before me… well, let’s just say it would not have been pretty. 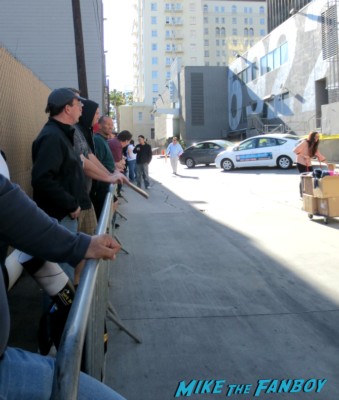 The only bright spot of the day was getting to hang with the entire MTF crew!! It was a full on family reunion. I also made some new friends – a big MTF shout out to Ian and Jenna!! I also got to see what happens to unwanted movie posters. They get tossed in the trash by the box full. Remarkably enough, people will actually dumpster dive for discarded one sheets of The Incredible Burt Wonderstone – who knew?! 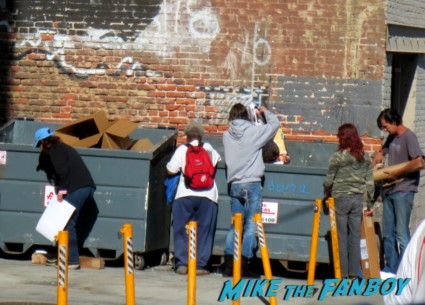 I also got to take part in an interesting little experiment. I took my new pal Ian’s portable chair to the front of the line, and I mean, the very first spot, and plunked myself down. I sat there for a good 25 minutes with my big pink bag of stuff and NO ONE said a word to me. I assume because I was so vocal earlier about all line cutters getting a one way ticket to Douchelandia (a fictional island where the world’s biggest douche bags are banished to), everyone was afraid to say anything to me. I ultimately, left my new spot, as I just couldn’t stay there in case Ford actually came over. I’d be cutting all of my friends, as well as becoming the very people I detest. 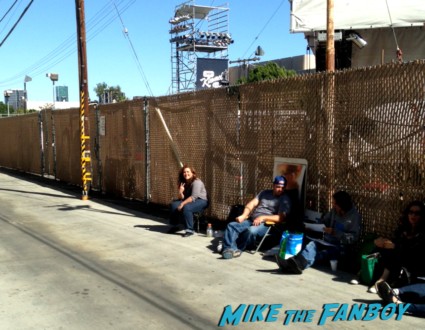 This was attempt number seven for him, so Harrison Ford is the new Hugh Jackman. If my track record stays the same, I only have 2 more fails to go before I get him. Until then!! 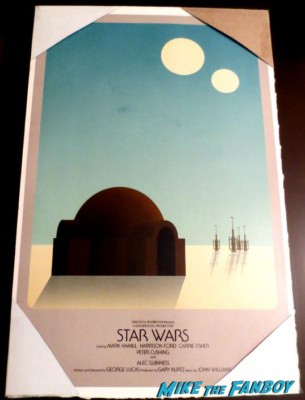