Home / FANBOY FAIL! • Karalee • Stars of the 1980's and 1990's / Fanboy Fail Fridays! Well Sort Of… Karalee Is The BEST To Her Friends! She Gets The “Diss” From Jeff Bridges! But Is Kindly Greeted By Jeff Lewis! She Did This For Her Friends! AWESOME!

Hey Folks! Sorry our Fanboy Fail Friday is coming a little late in the evening. Karalee is the best to her friends as she makes her way to a talk show taping for Jeff Bridges and Jeff Lewis. She went for two friends, each wanting one of the Jeff’s. Let’s read about her fail and success!

I call this entry “The Tale of Two Jeffs.”
One of my close friends in Dallas is a huge fan of Jeff Bridges — from “Tron” and “Against All Odds” to “The Big Lebowski” and “True Grit,” she loves her some J.B. So when I heard he was making a talk show appearance, I figured I would try and surprise her with his autograph.
There are a handful of celebs I’ve long heard are “super nice” and “will always stop and sign” for fans. Jeff Bridges is one of them. His appearance coincided with a pretty big movie premiere across town so I thought that would bode well as far as keeping the crowd numbers low. Wrong. I arrive and there are about a dozen or so in line. Less than 20 minutes later, a town car slowly drives past our little line. It pulls up to the back entrance and…sure enough, Jeff gets out. We yell for him, wave to him and well,…nothing. He doesn’t even look up. 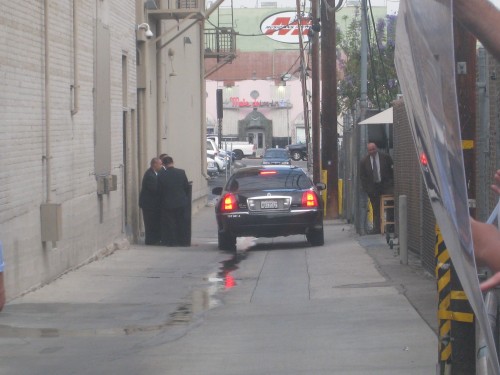 Strike 1. This does not look good. There’s a small group of us, it’s very early before the show will tape, and he doesn’t even give us a wave? Always stops and signs, huh? Well, surely he’ll do it afterward — right? 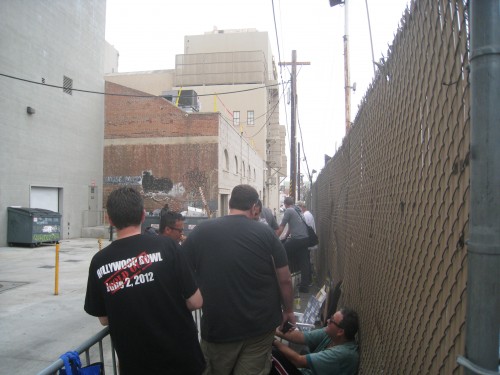 Now, he’s not the only Jeff I’m on the lookout for today. It turns out, Scotty the Music Man is a big fan of another Jeff — Jeff Lewis, star of Bravo TV’s “Flipping Out.” When he found out I was going to try for Bridges, he asked if I could also try for Lewis. Anything for Scotty!
I’m easily the only fan here for Jeff Lewis so I’ve got to be eagle eye for his arrival. Oh, there he is! I call his name, and wave and well…nothing. He goes right inside. Really?! I can’t even get Jeff Lewis to come over?! Strike 2.
As we wait for exits, the crowd grows. By the time it’s all said and done, there are 40 to 50 people waiting, all for Jeff Bridges. Mind you, there’s barely a barricade; only two have been placed in front of us. Red flag!
Luckily we don’t have to wait too long. The first to exit is Jeff Lewis. The crowd is kind and helps in my calls for him to come over. He pauses on his way out and then walks our way. He says he’s going to start at the end of the line and make his way back. I felt kind of bad as no one really has anything for him to sign. 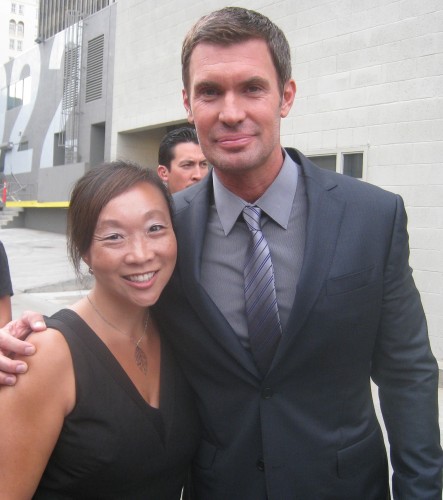 A few, including Pinky, ask for pics, which provides me some relief— I would have hated if I was the only one who stopped him after he’d made the walk over to us. I ask him to personalize Scotty’s photo and he gladly does. I get him a photo with him as well, because, well,…I just felt bad that he approached this large crowd and maybe five of us asked for his attention. He was very sweet and I know Scotty was happy with the photo. 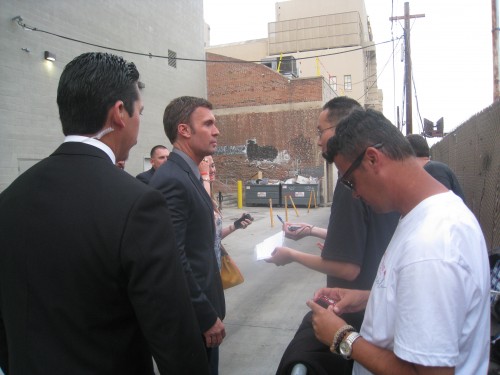 A little while later, a large truck drives by and stops right in front of the stage door, blocking our view — leaving us to crane our necks to see when Jeff Bridges exits. Strike 3. Someone spots him and we start yelling for him, waving to him and well,…you guessed it — nothing. He bolts to the parking lot and then the mad-dash scramble is on. 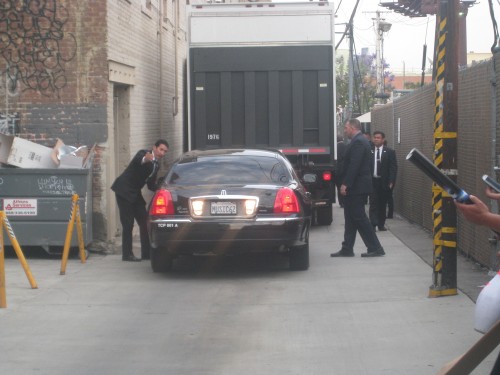 People start running around the block, hoping to stop his car before it exits the parking lot. I love my friend in Dallas, but I’m not running. Unless it’s Jon Hamm or Jennifer Aniston or Luke Perry (don’t judge), I’m not running. And even then, I may only muster a brisk walk.
I do make my way to the back lot and learn that Jeff Bridges did roll down his window and signed for the Usain Bolts of ‘Graphing.
Ahh well, what can you do? On the walk to my car, I run into one of the ‘graphers, who tells me he and some others got Jeff to sign at the stoplight — the stoplight three blocks away. He said Jeff rolled down the window and said, “Wow, you guys can really keep up with the car.” Truly happy some of the folks got him. Me and my stumpy stems opted not to Flo-Jo it for the autograph and missed out. But that’s OK. Perhaps, I’ll get him for my friend another time. At least I didn’t walk away entirely Jeff-less.
Thanks for letting me share…catch ya on the flip side!