One of my favorite new shows is USA’s Mr. Robot. The show is so good and so intense. It’s about Elliot who is a computer hacker played by Rami Malek. He’s a little off, could be seeing things, could be seeing people, but he joins a group led by a man named Mr. Robot that is intent on taking down Evil Corp.

Last weeks episode had one major twist, I’m sure I’m cool with it just yet, but it was a game changer.

The cast Rami Malek, Christian Slater, Carly Chaikin, and Portia Doubleday got together for a q and a this week. But you would have thought it was Brad Pitt, Angelina Jolie, Tom Cruise, and Julia Roberts by the madness. Holy shit.

I got there about an hour early and there were already 20 people waiting outside. Damn, it’s a slow day in Hollywood if 20 people are showing up for Christian Slater. To be honest, I really didn’t expect THAT Many people, I don’t think anyone did really.

I know there’s not much going on in Hollywood, so I guess the $20 people can get for a Christian Slater signed 8×10 is worth it, but man.

I was chatting with a few friends like Megan, Janna, Ed, Anthony and just watching more and more and more people show up. By the time the first arrival happened, I think there were like 45 collectors here. Holy shitcakes.

I almost decided to leave, I probably would have if the cast was around more in Los Angeles. I didn’t think the show was THAT popular, what do I know I guess. Mike the Fanboy is clearly out of the loop here… ironically, I’m sort of in the loop at the same time. Hmmmm…

The arrivals started. Christian Slater tried to sneak in the side and was the first to show and he was mobbed, he might have signed like 10, but to get him you would have had to plow down a family of three and subsequently dry hump Ed.

I know there was some confusion on that, I just needed to clear the fucking air. 🙂

So, needless to say, my dream of getting everyone to sign my Mr. Robot posters in a gold pen all nicely have been shot to hell. BAM!

Then, as I walked back to the front, dejected I decided… If I only get Rami Malek, I’ll be happy. He’s the lead and the reason I really came out.

About 20 minutes later Rami Malek and Portia Doubleday pulled up. It was like Brad and Angie were here. They both were super late and signed a few but got rushed in.

The lady running the event promised me, one on one, well, one on three… That she would let them sign on the way out and they would be leaving the side.

So, after grabbing some Baja Fresh I waited. Did they come out the side like we were promised? Nope. They snuck them out the back. Doh!

Now, Portia Doubleday, was nice enough to run over and signed one each. But I did get her in gold. That’s something right? RIGHT?

Not really. But I’m trying to make myself feel better.

The moral of this story? When you have the chance, just fucking dry hump Ed. Whether it’s on your own terms, or to get Christian Slater. Because you never know when you’ll have a good night or when you’ll wind up with nothing, and it you got to dry hump Ed at least you leave satisfied. 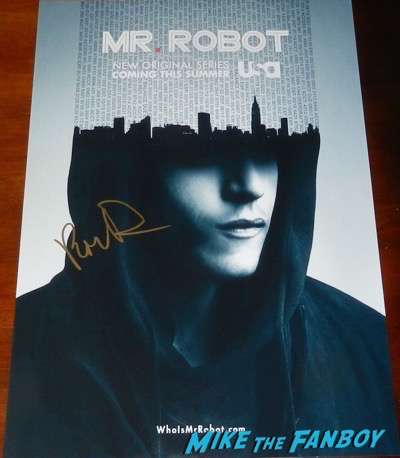