There are some days you question whether or not an event is worthwhile to attend. Considering the For Your Consideration blitzkrieg National Geographic has been doing, I decided to finally attend an event with Morgan Freeman. As most of the Fanboy and Autograph community know, Mr. Freeman frequently refuses any and all requests for anything. On the rare occasion like the “Oblivion” Premiere which Pinky actually got a photo with him.  I’ve really not heard of any other successes.

Despite my initial reluctance, my buddy David convinced me at the very least we’ll be entertained with Morgan Freeman at the Q&A. After all he is getting up there in age and on that idea, we decided to go. 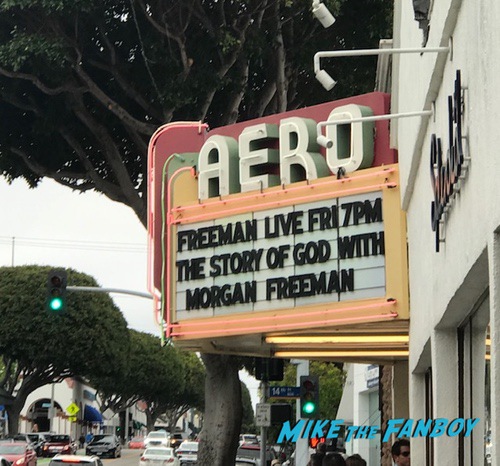 Considering FYC events can be extremely hit and miss, I figured it was going to be an interesting night one way or another. I was really relying on that maybe in front of voters Freeman might be receptive. In this case I actually brought out his American Film Institute lifetime achievement program, which you only received if you were an AFI 4 Star Member (or higher) and/or attended the actual event. 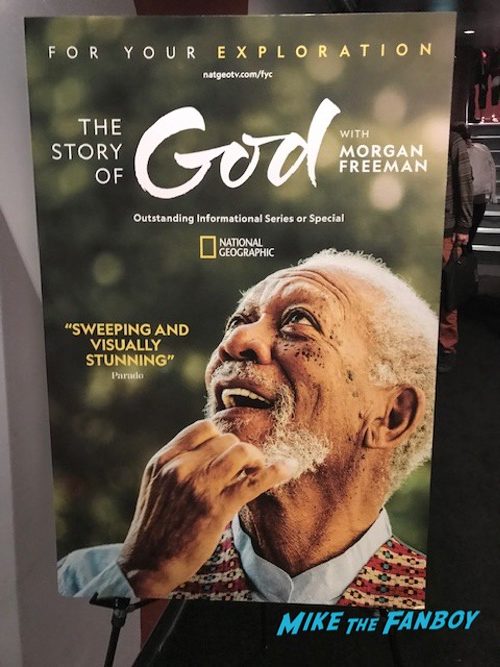 Considering the start time was earlier than a recent FYC event, my buddy and I rushed to make sure we’re able to get in time. Luckily we were able to get a decent spot upfront, however I overheard one of the theater organizers strictly scold the entire front row NOT TO JUMP UP ON STAGE! The gentleman was very adamant and it certainly did concern me, but considering voters were in attendance there was a decent chance anything could happen. However since it was also open to the general public it could equally be damning.

They played an episode of “The Story of God” with two producers now joining Morgan Freeman afterwards. A few minutes before the episode ended, Morgan Freeman walked by our seats and hung out in the wings before the episode concluded. Most of the audience stood up when he was introduced and a female fan actually snuck up and crouched down in front to hand him flowers, a birthday gift and card, which left him overwhelmed. Freeman certainly was stunned, but the people all around in the first few rows were certainly concerned. 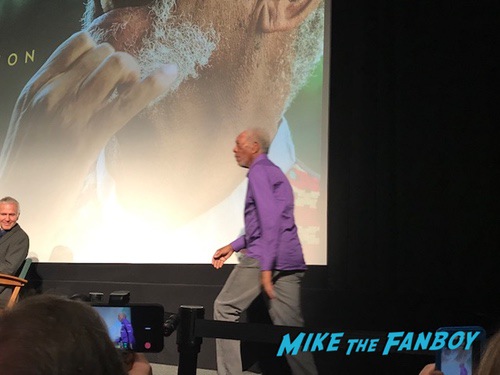 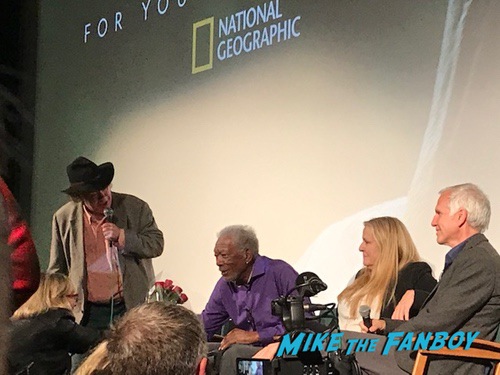 Surprisingly enough I actually enjoyed the show and found it very interesting. Obviously because of the celebrity host -an Academy award winner- I would have never seen the show otherwise. During the Q&A, almost everyone with the exception of really one question was pretty much directed at the show and or different aspects of doing this type of work, including one from “The Hollywood Reporter.” That was extremely rare for an entire Q&A to be very focused on the actual project instead of someone’s career. The loan question was surprisingly not about “Shawshank Redemption,” but Se7en and even then it was about the impact about the seven deadly sins with this project. 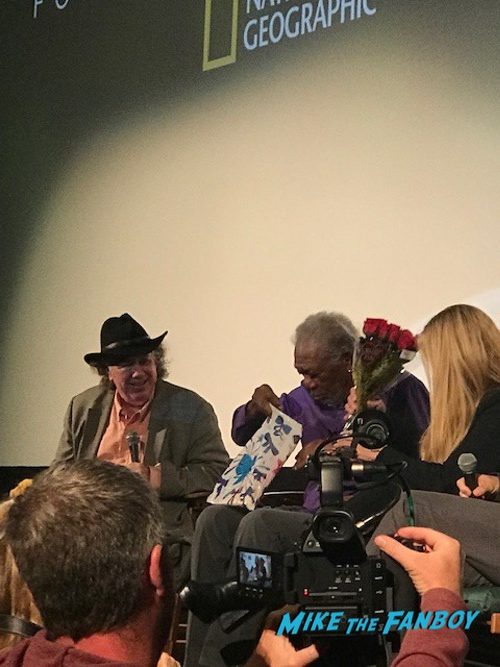 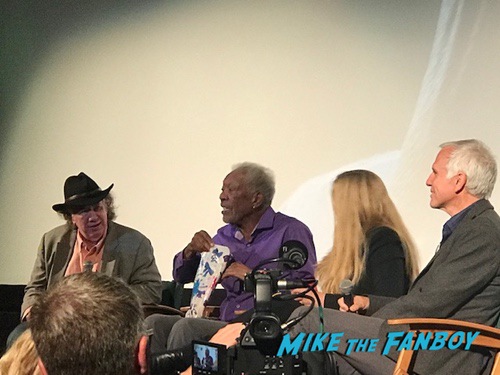 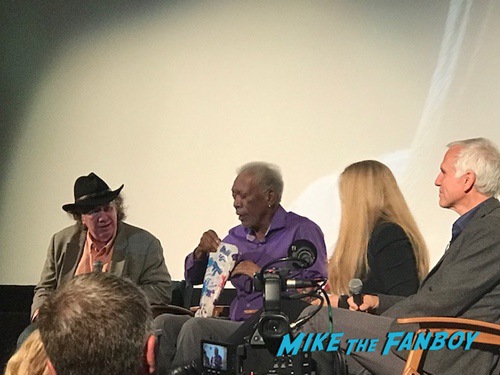 Suddenly the Q&A ended and a few people extended their arms out to the front stage. Morgan Freeman said a few words, but was not interacting at all having security direct him out. As he was leaving I literally was able to make eye contact with him and said, “Mr. Freeman could you sign your AFI lifetime program please?”

He then walked away and someone associated with the event emphasized he wasn’t able to interact with fans. A few murmurs were uttered shortly thereafter by others nearby,  “Well he’s not getting my vote!” Although this was technically a public FYC event, I’m still surprised he wouldn’t do anything. Although a fanboy fail for sure, I do respect he has been EXTREMELY CONSISTENT OVER THE YEARS.

Nonetheless it’s definitely disappointing seeing someone who comes across so friendly, caring and endearing that they actually do not want to interact with fans at all. To me it’s always ironic that celebrities consistently come across the exact opposite of themselves in films. Although a fanboy fail for sure, I do respect that he has been extremely consistent with requests. It’s always ironic that the people we usually perceive as “fan friendly,” are usually the most least likely to be nice for fan interactions. As my buddy David and I joked leaving at least he isn’t like Bruce Willis and will taunt you standing feet away so you can only gaze upon him. Until the next time!