I have really enjoyed the new installment of Queer Eye on Netflix. I was never a fan of the original series, but there is something endearing about the new one. I have had the chance to meet Karamo Brown, and he was very friendly. I tried for Jonathan Van Ness at a talk show not too far back, and he promised he would come and meet with us after the show. Well, he didn’t keep his promise, and ran to his car all while ignoring us. I was one of two people that day and was floored that he couldn’t take the time for two people.

The cast was making a group appearance on a talk show this week. I thought with all of the guys, sans Bobby, that there would be a better chance this time of meeting them. Well, that was silly of me. After being there for five minutes, the guys walked from the studio to their trailers. The six of us that were waiting all called and we received half a wave from the guys. I was still excited to see them and thought that they still may do it. Tan walked back and forth a number of times, but still only gave us a very short wave.

It was finally show time, and the guys made their way into the studio. They did a funny dance for the paparazzi. I thought to myself, “Hey, they seem to be in a good mood now. Maybe they were just trying to get their game faces ready, and will do it afterwards.” Well, the show ended and the guys exited with another half of a wave. What the heck? They really weren’t coming over. Again, there were SIX….I repeat SIX fans waiting. 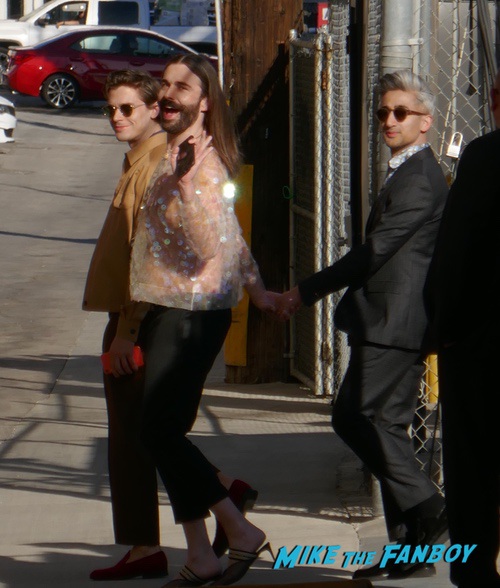 As I left the area, the few of us walked to where their cars were exiting. We thought, maybe they didn’t want to walk, but maybe they would stop and roll down. Karamo stopped. Since I already met him, I didn’t approach the car. Everyone got a photo. Antoni left next. Then, Jonathan and Tan left in a van together. They didn’t stop! I was beyond disappointed that these guys could not take two minutes to meet the six of us. Did I mention there were only SIX fans?

These guys are getting book deals, doing comedy shows, and getting many opportunities because of the show. Those shows are only successful because of viewers like us. Because of that success, Jonathan, Antoni, and Tan are branching out. They are out promoting the new season, and part of that is meeting the fans. Oprah has stopped and rolled down to meet fans at this location for pity sake. Are the Queer Eye guys are too busy or important to meet six fans? Well, the show has lost this fan. While losing one or six viewers may not make or break the show, I will be sharing this story with others. The guys are promoting love and kindness on the show, and they can’t be bothered to spread some of it to a few diehard fans. Antoni, Tan, and Jonathan, there will be day when nobody will be there or care. With only six of us this time, the numbers may be less next time. Later Queer Eye!