I love Fanboy Fails that really are no ones fault and the person who seems to get them the most is none other than our Ms. Pinky LoveJoy! Yep, that’s two Pink posts in a row! Hello!

For this weeks Fanboy Fail Friday Ms. Pinky is recalling a fail, I mean fall.. A literal fall. I mean literally Pinky fell, like kersplat hoping to meet Mr. Ben Affleck. It’s so adorable! You have to read it!

Hello, my lovelies. Pinky Lovejoy here with a sad tale for you. A story so sad, in fact, that it can only be blamed on myself. Sigh. Before we begin, there are a few things you need to know about me: 1) I love Ben Affleck. Like, I seriously LOVE, Ben Affleck and he is firmly placed forever in my “Top Five.” 2) I rarely wear heels. I know I should (being the 5’3″ giant that I am), but I never do well in them. There’s always a tragedy. 3) I’m a bit of a klutz. So, now that you have a little background, we can continue…..

Over the years I’ve had several occasions to meet Ben Affleck. Perhaps I’m just lucky when it comes to him, but overall he’s been fairly pleasant and has never turned me down. Our pictures, sadly, were sometimes less-than-perfect (read: horrible), 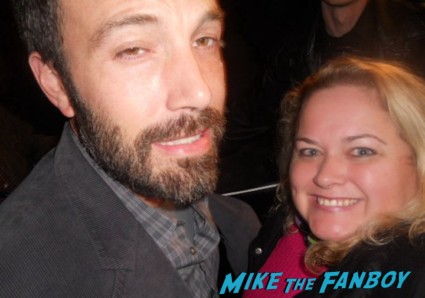 but it was still me next to Ben, so all was right with the world. 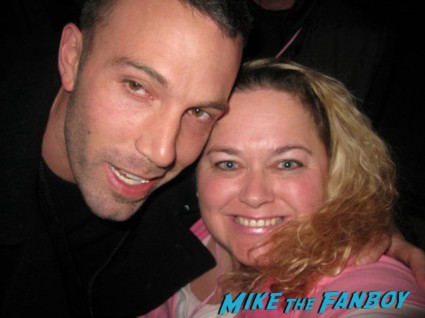 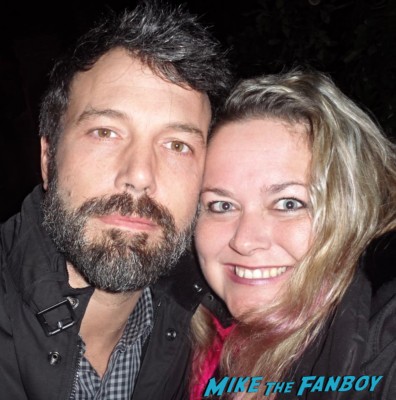 And here’s where my story goes downhill. A few weeks after the Oscars, I was fortunate enough to be invited to attend the John Varvatos Stuart House Benefit. Even better? The honorary co-chairs were Ben Affleck and Jennifer Garner. WIN!

Now, did I need another picture with Ben Affleck? Yes. Yes. The answer will always be yes. Actually, what I really wanted was for Ben to sign our most recent picture that I’m obsessed with. So, I printed it up to an 8 x 10″ size and printed out a few 5 x 7″ prints of our pictures. Hey, why not try, right? 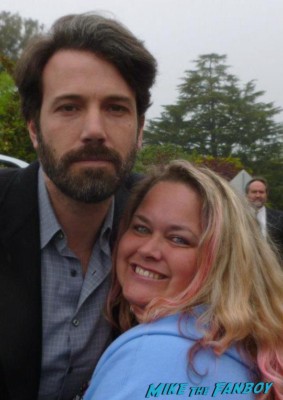 When you’re heading out to events, there are many decisions to be made – where to park, where to go, which event to attend, and, most importantly, when to arrive. Sometimes you make good decisions and sometimes you don’t. On this particular day, I wasn’t sure when I should head over, but I was aiming for being right on time, maybe even early, just so that I wouldn’t miss Ben. Unfortunately, my friend wanted to run an errand first that would delay us for about half an hour. Ugh. In retrospect, I should’ve put my foot down. I should’ve said no. I should’ve politely found a way not to miss the beginning. But, I didn’t. I thought we wouldn’t miss anything. I thought the honorary co-chairs would be around no matter when we arrived because I’d never been to this event and I didn’t know how it worked. Long story short, I made the wrong choice from the beginning.

As I should have expected, our half hour delay went even longer and then we couldn’t find parking. By the time we finally got into the event, it was PACKED. Like, so busy I was claustrophobic. Yes, there were a lot of people and a bunch of celebs, but they were kind of hard to see in the hustle and bustle and I was a bit overwhelmed. Also, my priority was Ben (and Ricky Schroder, but that’s another story….), so I was focused on finding him. There were rumors Ben and Jen were in the back, but of course we missed them arriving (when he did pictures and signed gorgeous autographs – kill me now). Before I knew it, Ben and Jen were onstage announcing an auction. After they spoke, they took up camp next to the stage until the auction ended (at which time Steven Tyler and Joe Perry from Aerosmith performed). I thought they’d stick around for the show, but, again, I was wrong. We saw them start to make plans to leave their place by the stage, and went around the building thinking we’d catch them leaving.

Unfortunately, this was another bad decision and we went the wrong way, which we realized when we saw Ben and Jen walking briskly quite a ways away. So, we started walking as quickly as we could without full on running. We were catching up to them. We were. We were practically within earshot of Ben when a tragedy happened. My heel (did I mention I wore heels that day? Yes, I even put on heels for Ben – that’s how deep my love goes) got caught in some crevice in the floor and as I tried to catch up to my beloved Ben suddenly, I. WENT. DOWN. Not just a little fall. A MAJOR fall. Like, I don’t know how that didn’t register on the Richter scale. 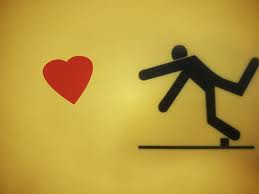 OK, I’ll admit it – as I was lying on the ground, it crossed my mind that he might have heard / saw my fall and would run back and rescue me (and then pose for a perfect picture and sign all our pics), but, alas, that didn’t happen (on a related note: Did I get knocked in the head? Why was I so delusional?). In reality, I fell, I lost Ben, and then Ben and Jen left. Gone. Poof. Dream over. Boo.

Of course I’m sure I’ll see him again. I’m not overly concerned about that. And the event was a lot of fun after I got over the fact that I was a total idiotic fool who fell chasing Ben Affleck. Plus, it was for a great cause. I just made some bad choices which resulted in my photo opp with Ben not being signed and a possible sprained foot. FAIL.