Brandi Glanville shames a “fan” as they have their kid out late at night trying to get autographs. I’m sure the .50 cents that a Brandi Glanville autograph is worth was deserving of depriving a child sleep. Also, Prince Fielder leaves a nasty note on a car, with a nice autograph though! Astros fakes and more!

There are people who get to stadiums hours early or stand in line at mobbed convention centers to snag a players’ autograph. But there has to be a better way!Who knew all you had to do to get Prince Fielder’s signature is do a crappy job parking your car? 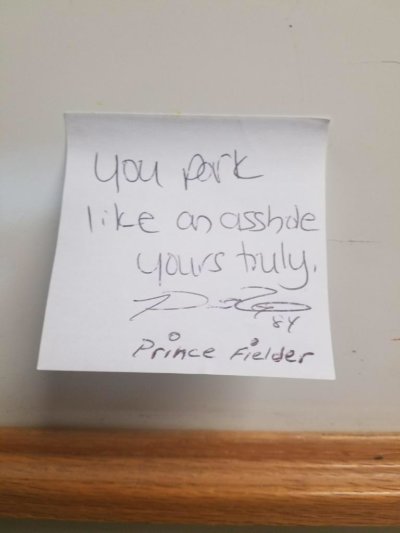 BRANDI GLANVILLE SHAMES FAN … That Kid Should Be in Bed!!!

Brandi Glanville went into fierce mom mode after running into a fan who brought a little kid with her to score autographs at night … and her scolding is hilarious.We got the ex-‘Real Housewives of Beverly Hills’ star leaving Catch LA Tuesday around 9:40 pm where she bumped into a lady who had a child with her … which was not okay with Brandi.

A “fan” stopped the “Modern Family” actress as she was navigating through the airport. He eagerly held out a blank sheet for Hyland to sign, but she politely turned him down and kept walking.

This upcoming holiday season signed Astros gear is a hot item.However, buyer beware there’s a lot of fake signatures floating around for sale, but there are ways to make sure an autograph is authentic.

TOM BRADY:Yeah, I’ll Sign for You …BUT THE PRICE JUST WENT UP!

If you thought $1,000 for a Tom Brady autographed football was expensive … hold on to your avocado toast — because the price JUST WENT UP!
Earlier this year, TMZ Sports reported that Tom was hosting a private signing session back in March — where fans could pick an item for Tom to sign … for a hefty price.

If you were on your way home and trying to pick up something quickly from the Pick ‘n Save in Hales Corners on Thursday evening, you were in for a memorable shopping experience.

That’s because Milwaukee Bucks star Giannis Antetokounmpo appeared at that grocery store from 5 to 6 p.m. to sign autographs for Bucks fans. As might be expected, fans came out in droves for the opportunity to get up close to one of the NBA’s top players, with the line snaking through the store from aisle to aisle.