Home / Fanboy News From Around The World / Fanboy News! Chris Hemsworth Signs Autographs In The Shower? Getting An Autograph Tattooed On Your Butt? The Queen’s Signature For Sale! And More!

Check out all the Fanboy News Below!

The remnants of Team Penske’s autograph battle can be found all around Indianapolis Motor Speedway.Simon Pagenaud’s signature adorns a giant poster of teammate and defending IndyCar champion Josef Newgarden hanging outside the famed track. Newgarden’s autograph is affixed to a street sign bearing Pagenaud’s name.

Another day, another adorable Instagram video from Chris Hemsworth. Today the Thor star has blessed us with this hilarious attempt to sign a bunch of headshots for Avengers aficionados in Singapore. The Aussie star touched down in the island city on Friday and wasted no time getting ready to greet fans.

Recent event in Singapore where I found out they had their biggest opening ever for our little passion project @avengers: Infinity War. No blister too small, no paper cut too large, all for the fans, show must go on!!!!! #pianodaysareover

While you may have missed the invite to the Prince Harry and Meghan Markle’s wedding, you still have the opportunity to feel like part of the Royal Party – for the right price – at a Vancouver auction this weekend.That opportunity has presented itself in the form of an old guestbook, featuring the signatures of the Royal Family – specifically, Queen Elizabeth II, Prince Philip, Prince Charles, and Princess Anne.

a href=”https://www.beckett.com/news/serena-williams-upper-deck-autograph-exclusive/” rel=”noopener” target=”_blank”>The contract covers multiple years. With it, Upper Deck will release a variety of limited edition items with Williams’ signature and image. While there’s the familiar things like autographed photos, it also embraces her place as one of tennis’ biggest stars with tennis balls, tennis dresses and racquets.

Some fan apparently loves Austin Seibert enough to get the Oklahoma kicker’s autograph permanently etched on his butt.

Seibert shared a photo on Instagram on Sunday night of someone’s rear end bearing a new tattoo of the Oklahoma logo and Seibert’s signature. The Oklahoma specialist captioned the photo with the question, “Woah, I wonder who did this?” followed by an emoji with a monocle. 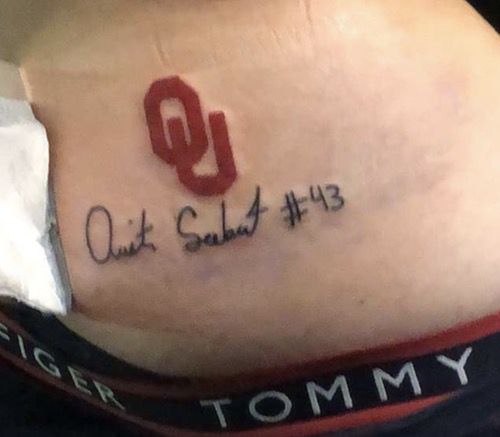 “Waiting for a Sign” Tells Tales of Autograph Seeking

If you’ve ever chased a baseball player for an autograph, there’s a new book out that you might want to put on your summer reading list.

“Waiting for a Sign” was written by Kevin Keating, a long-time collector/dealer and the current Principal Autograph Authenticator for PSA/DNA. A native of suburban Chicago, Keating spent much of his youth acquiring thousands of signatures from major leaguers who came to play against his hometown Cubs or White Sox. By the time he graduated from high school, he had amassed more than 10,000 autographs.

Thousands of people have been packing into Downtown Phoenix for 2018’s Phoenix Comic Fest, and on Friday, one of the big stars at the event was William Shatner, perhaps best known for some as the original Captain James T. Kirk in the Star Trek series.

For the super fans, Friday was a dream come true.

“It was like meeting the legend, the myth you know,” said one fan.

The Korean boy band BTS visited The Ellen DeGeneres Show, and since their last visit, they’ve become so popular that Ellen had trouble hosting her show. The audience was filled with their fans, the BTS Army, and even occupied an entirely new section in the studio.