Home / Fanboy News From Around The World / Fanboy News! Meghan Markle Skirted Royals To Sign An Autograph! Trump’s Affair Started With a Signed DVD! Ingenious Attempt To Get Federer’s Signature! And More!

It all starts.. with a signature.

Longstanding royal protocol contends that members of Britain’s most hallowed family don’t give out autographs. But for Meghan Markle, currently kicking off her first official round of visits to sites around the United Kingdom ahead of her spring nuptials, protocol is made to be worked around.

Todd Frazier is still giving the thumbs down, this time with the guy who started the craze.Frazier and Gary Dunaier, aka “Thumbs Down Guy,” finally met one another on Saturday at Steiner Sports in the Roosevelt Field Mall on Long Island, a mere four months after his thumbs down disapproval of Frazier hitting a home run at Citi Field went viral and became a rallying cry for the Yankees.

The Swiss legend can’t go anywhere at Melbourne Park without being mobbed by fans.The lines to get a glimpse of him on the practice court alone are a nightmare to even think about. 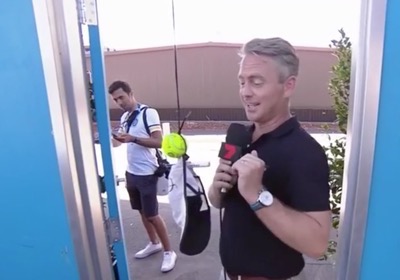 Leonard Fournette autographed and gave away his car bumper after accident

Jaguars star running back Leonard Fournette was involved in a three-car collision on Tuesday, per USA TODAY Sports. Fortunately, no one was injured, but the NFL rookie’s Maybach, that got rear-ended and pushed into the car in front of him, didn’t look so great afterwards.

#Jaguars RB Leonard Fournette signed the bumper of his 2017 Maybach and gave it to a first responder after someone rear-ended him on I-295. He also posed for pics. Everyone ok. Woman in an SUV cited for careless driving, causing crash. pic.twitter.com/hxwJznCQm1

Is the cat officially out of the bag? Or are seasoned Marvel pranksters sending fans (and, yes, entertainment journalists) down a rabbit hole of popular theories once again? This is the question we are asking and answering after Chris Evans and Sebastian Stan signed a Captain America shield for a Marvel fans with Nomad clues, suggesting that Steve Rogers will adopt that personality in the MCU:

Supposedly, someone really *did* dip a magazine page in Versace’s blood, just like in “American Crime Story”

The Assassination of Gianni Versace, largely based on Maureen Orth’s book Vulgar Favors, is a dramatized examination of Cunanan’s months-long murder spree in 1997, leading up to his murder of Versace. The premiere episode, “The Man Who Would Be Vogue,” largely follows the immediate aftermath of Versace’s murder, from his longtime partner Antonio D’Amico (played by Ricky Martin) discovering the shot designer outside the gates of their home and the arrival of Donatella Versace (played by Penelope Cruz) to the public’s reaction to the murder.

Clifford shared details of their encounter, including that Trump allegedly did not use a condom and that he asked her to autograph a DVD of her pornographic movie 3 Wishes. She also said that Trump compared her to his daughter Ivanka, saying: “He told me once that I was someone to be reckoned with, beautiful and smart, just like his daughter.”