Home / Fanboy News From Around The World / Fanboy News! Timothee Chalamet’s Fan Encounters! Peter Capaldi’s Charging How Much?!? Hit By A Golf Ball And Then Getting It Signed? And More!

This week Timothee Chalamet talks about fan encounters, Peter Capaldi is in hot water over his convention prices, don’t mess with the Doctor Who fans! and More!

At the Sundance Film Festival, someone said that Michael Stuhlbarg’s monologue in the film, playing Mr. Perlman, was so impactful and that it was representative of a father that this person didn’t have, and a father that that person needed. In that moment, it became clear to me that this was the first project I had been a part of that was affecting people. 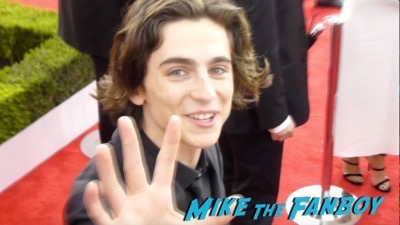 A central Indiana teacher is showing off his presidential autograph collection for a unique Presidents Day lesson for his students.Scott Black is a speech and theater teacher at Fishers High School. He has autographs from President Hoover to President Clinton — except for President Eisenhower.

His spell as the Time Lord divided viewers.But now former Doctor Who Peter Capaldi has outraged fans by charging £75 for an autograph.The 59-year-old actor, who is one of the main draws at the annual London Comic Con, is giving a talk at the sci-fi-led event. 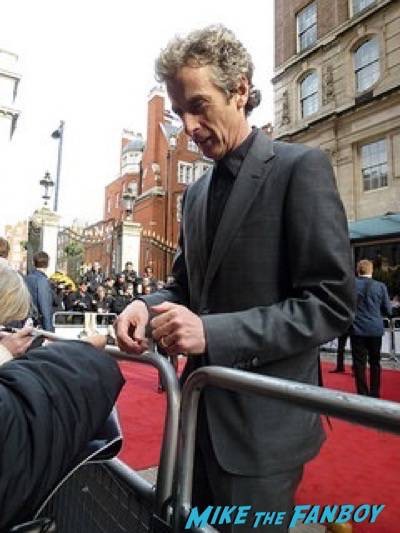 Honda Classic: Man gets bonked by golf ball, gets an autograph for his troubles

A man got hit in the head by a golf ball hit by Justin Thomas during the second round of Friday’s Honda Classic at PGA National.

The man, who didn’t want to be identified, suffered a scrape on his scalp and had some bleeding but was otherwise unharmed.

Thomas ended up signing a golf glove and gave it to the man’s daughter.

Running into a famous athlete literally anywhere is one of the coolest experiences ever for a fan. Obviously, it doesn’t happen often, but when it does, it’s one of those moments you’ll never forget for your entire life.

Well, one Oakland Raiders fan got a pretty big surprise while working his shift at In-N-Out Burger, when Derek Carr decided to swing by to grab some food. As you can see from the post below by Brandon Contreras, not only did Carr take time to pose for a selfie, but he also signed a bag for the Raiders fan as well.

GREATEST MOMENT OF MY LIFE DEREK CARR JUST CAME IN THE DRIVE THRU !!!!! pic.twitter.com/H0R0E7F4Ct

When it comes to collecting autographs, it’s never easy finding documents previously signed by the dearly departed. Unless, of course, you have enough disposable income and can pay top dollar when these rarities come up for auction. Or, better yet, you were astute enough to land their scrawls before they exited this world. Such is the case for autograph collectors chasing the scarce signature of late Apple Computer co-founder and iPhone visionary Steve Jobs, who passed away in 2011 following a lengthy battle with pancreatic cancer. He was 56 years old.

CLEVELAND — The man who created some of the biggest superheroes in comic book history has canceled his upcoming Cleveland appearance.

“Due to unforeseen circumstances, Stan Lee will not be attending Wizard World Cleveland,” the event’s organizers posted on Facebook. “All Stan Lee VIP, autograph and photo op tickets are being refunded. We apologize for the cancelation.”

Both players are among those people debate the best-ever in their respective sports. Orr is a three-time Hart Trophy winner as the NHL’s MVP from 1970 to 1972. He also won the Norris Trophy as the league’s top defenseman eight times in a row between 1968 and 1975. A pair of Stanley Cup wins with the Boston Bruins are among Orr’s countless other accolades.

THE WORLD OF celebrity Youtubers is awfully confusing to anybody who doesn’t regularly check in on it.

We think Ellen DeGeneres has just made Tiffany Haddish’s year with a surprise meeting from her idol Oprah Winfrey. It’s only the second month of the year but we think the Girls Trip breakout star’s entire year has been made already. Things got pretty emotional as Tiff began telling Ellen a story about writing letters to Oprah and never getting a response – not knowing that Oprah was about to come out and surprise her.