Home / Fanboy News From Around The World / Fanboy News! Why Julia Roberts Avoids Fans! Gal Gadot Charges How Much For A Signature? Astros Tattoos! And More!

This week, Gal Gadot sticker shock! Julia Roberts on why she avoids fans and more!

Everyone except for Ben Affleck will be at ACE Comic-Con in Long Island, New York this weekend to promote Justice League. Gal Gadot, Henry Cavill, Jason Momoa, Ezra Miller, Ray Fisher, and even Ciarán Hinds, who voiced Steppenwolf, are scheduled to attend.

Why Kate is forbidden from signing autographs for fans

The Duchess of Cambridge is both friendly and obliging when she meets fans at official engagements – she has even been known to pose for a selfie in the past. But if you ask the royal to sign an autograph, she will have to politely decline. Along with the rest of the British royal family, including Prince William, Prince Harry and the Queen, Kate is forbidden from writing her signature down for members of the public, because of the risk of it being forged, according to the Express. Her father-in-law, Prince Charles, is said to turn down such requests with the response: “Sorry, they don’t allow me to do that.” He did, however, break protocol back in 2010 when he signed an autograph for a victim of devastating floods, writing ‘Charles 2010’ on a piece of paper, although that appears to be the only occasion.

Actress Julia Roberts says she tries to avoid meeting her fans in person as she feels shy.Despite having spent years in the public eye, Roberts says she never knows what to say when she meets a fan.“I don’t hate it, but I try to avoid it,” she told Hello! magazine. 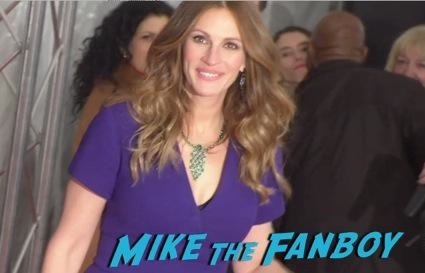 The rocker can be seen meeting and greeting excited fans of all ages outside the historic King Tuts venue, where Oasis played the gig which led to them getting their big break and being signed to Creation Records.

Foxy lady! Pensioner, 65, who got Jimi Hendrix’s autograph when she jumped on his tour bus as a 15-year-old ‘groupie’ puts it up for sale for £2,000

A pensioner who blagged Jimi Hendrix’s autograph after cheekily jumping on his tour bus as a 15-year-old girl is now selling it at auction for an estimated £2,000.
Lynda Huckerby, 65, managed to get the American rock icon to sign her programme after brazenly leaping on his coach after a concert in April 1967.

Tweet Pin It
Tags:Fanboy News! Why Julia Roberts Avoids Fans! Gal Gadot Charges How Much For A Signature? Astros Tattoos! And More!