U.S. President Donald Trump autographed a few bibles in March 2019 as he visited survivors of a tornado outbreak at a church in Alabama. As political commentators argued over whether signing the holy book was sacrilegious, some on social media took the opportunity to dredge up another photograph of Trump scrawling his signature, this time on a woman’s chest:

Press Pass Collectibles has signed Magic Johnson to what it calls “an exclusive long-term memorabilia partnership.” It’s the first-ever exclusive autograph deal for the Hall of Famer, according to Press Pass, which is one of the largest distributors of autographed memorabilia.Johnson will sign basketballs, jerseys and other memorabilia for Press Pass, a division of Bell Sports Marketing.

Collectors looking for a unique piece of Mickey Mantle memorabilia are in luck after a pair of his gambling cards went up for auction, according to TMZ Sports.

Yesterday at a fan signing for Becky Lynch, an individual reportedly had a seizure while waiting in line and had trouble making it up the stairs. Lynch quickly made her way over and held the fan until EMTs arrived.

On Sunday night’s Last Week Tonight, John Oliver ridiculed President Donald Trump for signing bibles for Alabama residents who were recently victims of massive tornadoes.“I am not remotely surprised that Trump did that, I’m just slightly confused as to why anyone would want him to,” Oliver stated, adding “because seeing Trump’s autograph on a Bible should be like seeing a picture of your own Mom on the cover of a Penthouse magazine.”

Wales Comic Con: Would you pay more than £250 for autograph and photo with Rupert Grint?

Would you pay more than £250 to have your picture taken with Rupert Grint – along with his autograph?That is how much it will cost fans wanting to get up close and personal with the Harry Potter star at next month’s Wales Comic Con.The world-famous actor, who played Ron Weasley in the movie adaptations of J K Rowling’s books, will be in Wrexham on Saturday, April 27. 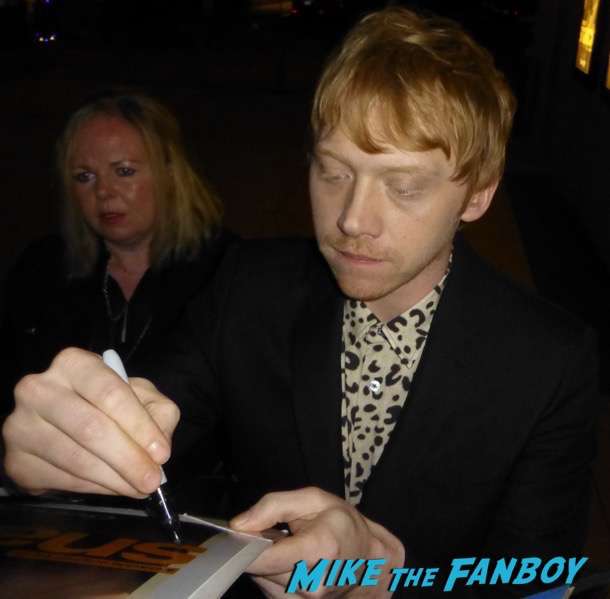