It’s Fanboy News, all the news that’s fit to print.

More Keanu Reeves awesomeness! Mily Cyrus gets grabbed by a fan and more!

Video footage on Twitter shows Cyrus being held by a member of the crowd who attempted to kiss her neck, while meeting some fans on the way to her car outside her hotel in Barcelona, after she headlined Primavera festival.

James Corden had a huge surprise in store for patrons of a London comic book shop when he paid a visit and brought a few special guests with him: the cast of the new “X-Men” sequel “Dark Phoenix”.

Offset is gonna lose some cash because he apparently lost track of one lingering legal issue — the beatdown his security put on an autograph seeker after last year’s Met Gala.TMZ got the wild video of the May 2018 incident … the ‘grapher was trying to get Cardi B’s John Hancock after the gala … only to get his ass kicked by a bunch of guys he believed to be Cardi and Offset’s hired muscle.

When most people get an autograph from a celebrity they really like, they just vow to never wash it off.Not Natasha Juntermanns of Lower Sackville; she took that philosophy one step further.
Corey Hart left what has turned into a lifelong mark on one Lower Sackville woman during one of his three Maritime concerts this week.

Aside from President Trump holding up a D-Day memorial to do a Fox News interview with the abominable Laura Ingraham with a cemetery backdrop, Trump’s trip overseas was relatively low on comedic value.So imagine my glee at Trump putting his John Hancock at the very top of this D-Day proclamation, which was also signed by 15 other world leaders:

A Waukesha woman has turned a Brett Favre autograph into a permanent memory that will be with her wherever she goes. The NFL Hall of Fame quarterback and Packers Super Bowl-winning Favre autographed Julie Galbari’s arm Saturday with a special marker so she could get a tattoo of Favre’s signature.

The outpouring of stories intensified after a New Yorker story in which writer Naomi Fry proclaimed Reeves to be “too good for this world” and the “unlikely antidote to everything wrong with the news cycle.” The story ended with an endearing anecdote about the author spotting Reeves squeezing into a chair in the cheap seats at a local theatre. 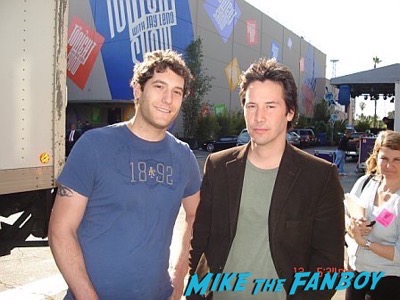 Silenced by stroke, Randy Travis is ready to reconnect with fans at CMA Fest

Randy Travis flatlined. During a serious struggle with cardiomyopathy in 2013, the legendary country singer’s heart stopped beating, and intensive care doctors at a Texas hospital shocked him back to life. Three days later, his family learned he’d suffered a massive stroke.

Maybe if things were different, if he were happily enshrined in Cooperstown, if his interests were more varied, if he hadn’t been exiled by the game he played with such famous fervor, Pete Rose’s daily routine might be more glamorous.Instead, just 22 months short of his 80th birthday, baseball’s all-time hits leader is trapped in a familiar but humdrum Las Vegas orbit, paid to sign autographs during the day and driven by a gambling bug he’s never shed to bet on televised sporting events at night.

Hader, a huge Dateline fanboy, paid a visit to the NBC production during an appearance on Sunday Today. (Hader is also, of course, a beloved Saturday Night Live alum—making the gimmick a nice exercise in brand synergy for NBC as well.) SNL fans likely recall that Hader loves Morrison so much that he once did an unforgettably deranged impression of him back in 2011’s 37th season—in a sketch titled Dateline: The Mystery of the Chopped Up Guy. Hader’s wild bug eyes and gravely “Yeeeeaaaaahhhh!”s stole the show—and Steve Buscemi made a pretty great perp.