A South Jersey auction house is offering a copy of the report that urged impeachment of President Donald Trump — a copy purportedly autographed by Trump himself.According to an account from Goldin Auctions, Trump signed the report’s title page at a campaign rally in Michigan on Dec. 18, the same day he was impeached. 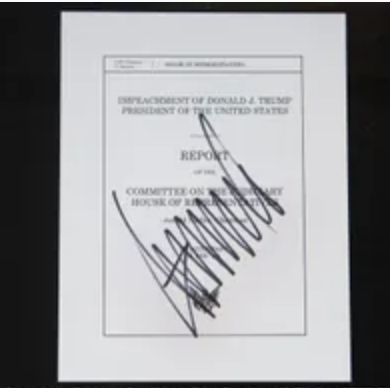 Darius Garland has already made a substantial splash during his rookie season in Cleveland. The Cavaliers’ point guard of the future is also making a statement in the sports memorabilia industry after signing a deal with Upper Deck for exclusive autographed memorabilia and collectibles.

Every time a major sports figure or entertainment celebrity passes on, the scam artists prey on fans and collectors.It was a major issue in 2016 when Muhammad Ali died and a virtually unlimited supply of fake signatures began showing up on eBay. Many sold for hundreds of dollars or more.

Jennifer Garner gets your ‘primal need’ for Girl Scout cookies, so she’s shipping them to fans

Whether you’re a fan of Thin Mints, Samoas or Tagalongs (or Peanut Butter Patties, depending on where you’re from), the Girl Scouts have cookie options for all and Garner is here for it.

The actress told her Instagram followers on Friday that she understands their “primal need” for cookies, so they can send her their order at jenhasextra@gmail.com. But fans should move fast – supplies are limited, she said.

We understand the primal need for Girl Scout cookies. 🍪♥️ Apparently there are some crazy corners of the country where @girlscouts are NOT set up in front of every grocery store—and we are here to help. If you are in need—email me your cookie preferences and address—and our stash will go on a first come, first served basis (although a good story has been know to shake a couple of boxes off the Thin Mint tree). 📬: jenhasextra@gmail.com