Home / Fanboying! • Stars of the 1980's and 1990's / Fanboying Gay Pride! Only For The Love Of The Go-Go’s and Belinda Carlisle! Drag Queens! Naked Old People! And Four Shades Of Crazy! Autographs! Photos!

I wanted to stay home tonight… I really did… What dragged me out of the house you may ask? Scotty… Well… Scotty and my love of Belinda Carlisle and the Go-Go’s! You see I have been a Go-Go’s fan since… Well, birth! LOL… And I even met the band when I first moved to LA when they did an in-store at Warehouse music when God Bless The Go-Go’s was released.

I’m digressing. But when Scotty called he said, Belinda Carlisle is doing a show tonight, and it’s at Gay Pride. Fanboying Gay Pride? Well… I wasn’t quite sure. Now, I love everyone, Support Gay Marriage, vote no on prop 8, etc.. but man… Gay pride isn’t my scene. But, after pausing for a second and realizing that the only Go-Go I did not meet last year was Belinda Carlisle, I had to do it!

8:15 p.m. – I just ran out the door. Scotty is down there scoping out the scene. He said it looks fairly accessible so this could be good. I just don’t know…

8:34 p.m. – I made it over the hill in record time but parking… Let’s just say… Nightmare! NIGHTMARE! Ugh… Ah well. I’m driving myself crazy here…

8:58 p.m. – I just talked to Scotty and Belinda arrived and is in… Dammit! Well, it looks like we’re not going to be able to go to the show. See a lot of times if you go see the show you might not make it back to meet the artist so… you have to decide sometimes…

9:23 p.m. – So, I’m huffing it down the blvd armed with the vintage Rolling Stone, Automatic Picture disc and We Got the Beat picture disc. All the other girls signed at their star ceremony so all I need is Belinda. 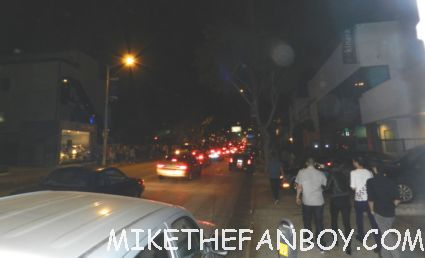 9:33 p.m. – I see Scotty finally and we make our way to the back. It’s a tad… Zealous on Santa Monica Blvd tonight. LOL… 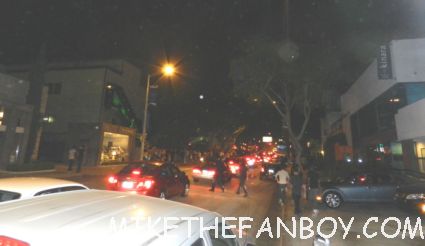 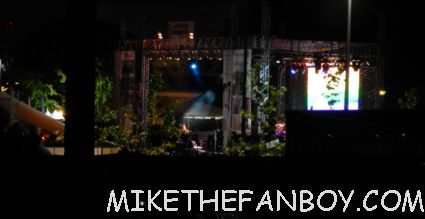 9:54 p.m. – Oh there’s gay drama going on next to us… Gay drama is so much fun. Apparently, John and Chauncey are having problems and Ryan decided to get in the middle which is not where he should have stuck in his nose. There are a lot of “girl” and “bitch please” being tossed around.

9:58 p.m. – Our first drunk person puking. God, this is like the seedy underbelly of Fandom!

10:01 p.m. – Did I mention that Scotty met Belinda? On the way in she signed a couple things for him and he said she was nice. So, I’m hoping that she’s cool on the way out. Plus, anytime I get to hear Mad About You live is a good evening.

10:09 p.m. – Chauncey is back along with a new guy Phil. Phil was there when Ryan butted his nose into the whole sorted mess. I figured out that John asked out Chauncey’s ex which is a giant no no and if Ryan would have just stayed out of it, all would have been well… BUT NO! He didn’t. These are the gays of our lives. 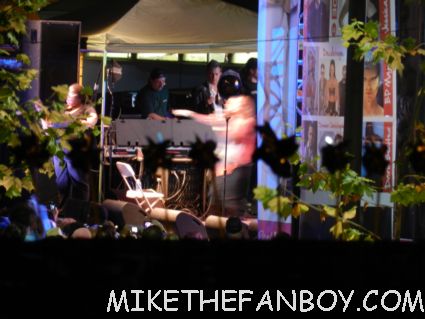 10:19 p.m. – Okay, adding to the gayness is a Lesbian couple who are now fighting. One girl is trying to talk to the other girl. The first girl took her phone and just set it on the parking cone and walked away. Oh no she didn’t! 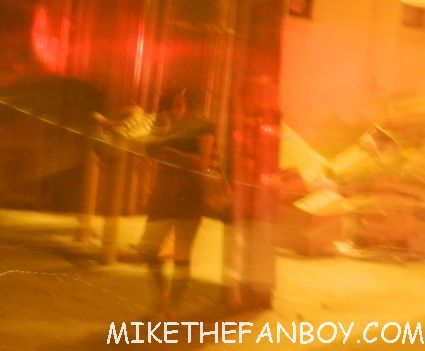 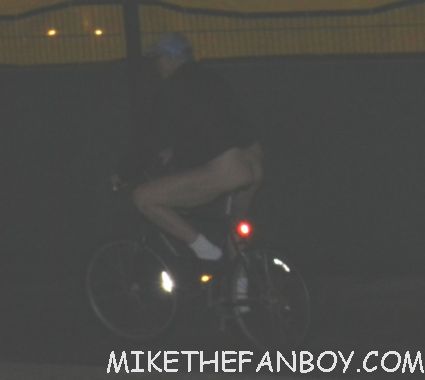 Seriously, he’s naked. He has no pants and he must be like 65! Ewwwww… It’s like watching a lava lamp, you know you shouldn’t but it’s there and it’s fascinating. Naked guy is riding his bike in a circle around the back… WHY! WHY! WHY would you take off your pants and ride your bike in a circle? It’s… I… Wha… 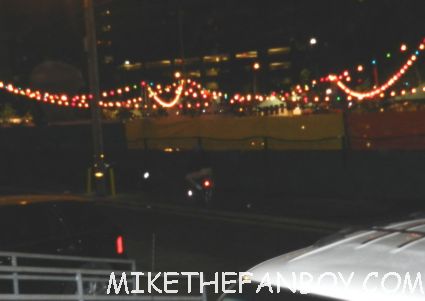 10:31 p.m. – Back to the Gays of Our Lives… Ryan and Chauncey are making out now… How nice they mended their fences with saliva! John says, “This is what Gay Pride is all about!” I feel like a small gay man should walk out the back of the bar and say “God Bless us every Gay!” ALA Tiny Tim in a Christmas Carol. Loving every second!

10:44 p.m. – Naked man is still riding around. I swear his butt cheeks were bouncing in time to Head Over Heels…. Seriously it happened. 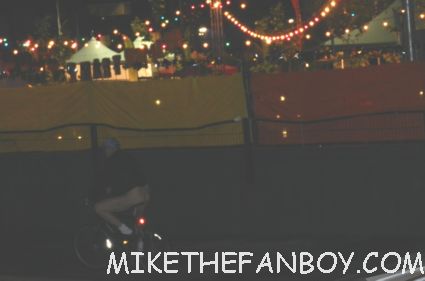 10:48 p.m. – I just told Scotty, we have our own ugly naked guy like the cast of the hit NBC series Friends! Wait.. When did you last hear the statement “hit NBC series!” LOL… I kid… But it’s true.

10:50 p.m. – Uh oh… Ugly naked guy has stopped riding his bike and is now on the ramp where we are. I’m thinking we should make friends with Ryan and Chauncey because this is a tad too naked for comfort.

10:51 p.m. – Now that could be a hit NBC series… Too Naked For Comfort starring John Travolta as Bob, a lonely bachelor looking for love in a massage parlor and Daphne Zuniga as his ex-wife lawyer who is getting remarried to Christian Slater, a hard nose detective with a streak of crazy. Dude, that say H-I-T!

11:12 p.m. – The door is opening… Oh My God, there’s Belinda… I’m nervous. As the door opens I ask Belinda if she would mind signing. She says, “Sure!” I’m dying! She signs my Rolling Stone and I tell Belinda I have my tickets for the Hollywood Bowl show. 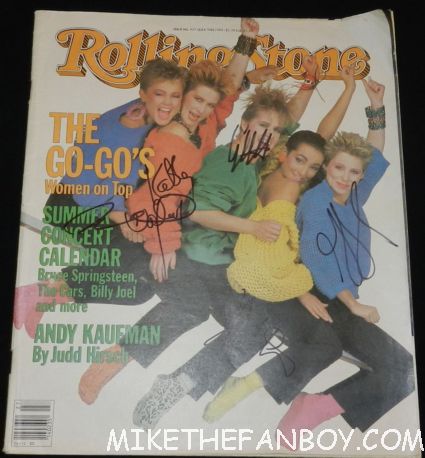 She says, “Really?” I say yeah, my friend and I got the meet and greet tickets! She says, “Oh my God! What’s your name?” I say Mike and then Belinda signs my Automatic picture disc. 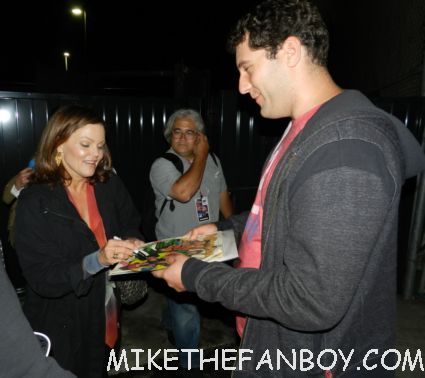 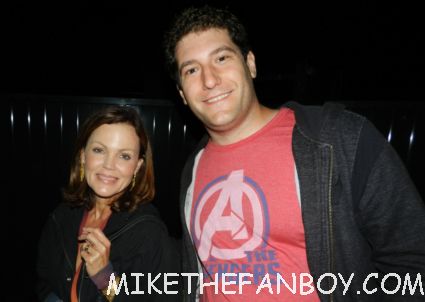 Thanks again to Scotty for hanging out with me tonight! Thanks to Belinda for taking a minute.

What a crazy night, but so so so so so worth it. I’m a tad stoked must admit! Swoon… 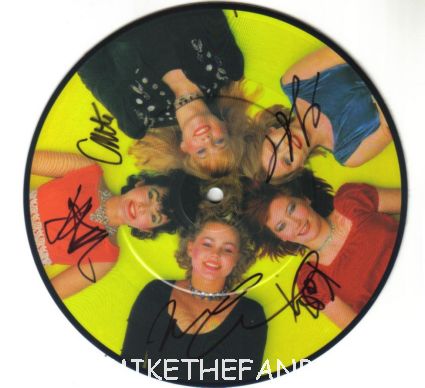