Home / Reviews / Fargo Year Two Blu-ray Review! Does The Second Season Of The FX Series Live Up To The First?

When I first heard that the Coen Bros classic drama-dy crime thriller Fargo was being adapted into a television series, I wasn’t all too happy about it. Why mess with a classic? Then I saw the first season and fell in love with the series. It was so well done and acted I couldn’t believe it. Now Fargo Year Two is here and I’m happy to say, not only does it match the first season, but in some ways it might even be better. 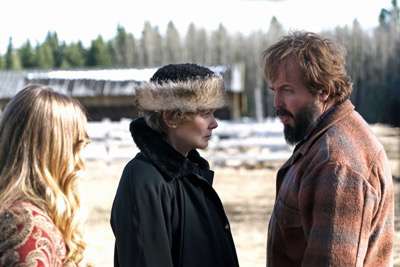 In Fargo Year Two, out now on Blu-ray, it’s 1979 in Sioux Falls South Dakota and Luverne Minnesota. One not so small incident at a local Waffle Hut leads to a whole heap of trouble. We’re introduced to a whole new cast of characters. Lou Solverson (Patrick Wilson) is a State Police Office who just got back from Vietnam. Lou starts an investigation into a local crime gang which leads him to mob ties and eventually to Peggy Blomquist (Kirsten Dunst) who is a local beautician. 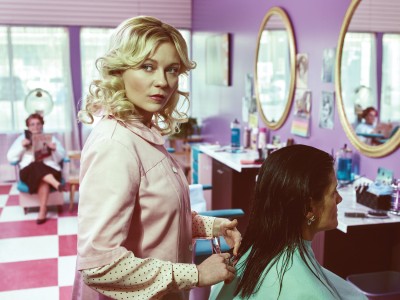 Peggy is married to to Ed (Jesse Plemons) the assistant to the local butcher. Lou clearly has a lot on his plate and his father-in-law, Hank (Ted Danson) is helping him out to try and piece everything together. This is Fargo after all and colorful characters are in no short supply. There’s Karl Weathers (Nick Offerman) who is the local lawyer in Luverne and a Korean war vet and a drunk albeit a fun drunk. There’s also Joe Bulo (Brad Garrett) who is the face of a Kansas City crime syndicate who has Mike Milligan (Bokeem Woodbine) working as his number two. 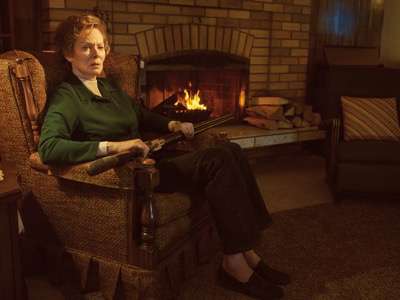 Mike is an interesting fellow, he has detective instincts but is really the heavy even though he always has a smile on his face. Bulo and his crew have their sights set on Fargo and taking out the Gerhardt crime family who is being led by Floyd (Jean Smart). Floyd’s husband is about to die and she has taken over the family’s business much to her sons Dodd (Jeffrey Donovan) dismay. Dodd wants to take over the family business himself and is pretty much waiting on them both die or get killed off. He has two brothers, Bear (Angus Sampson) and Rye (Kieran Culkin).

Do you got all that? Good. Fargo is an intricate and wild ride.

While Fargo Year Two is a different tale in this anthology series, it does have ties to the first season of Fargo, Lou is the father of Molly from season one. It’s really a credit to the series that it doesn’t follow the typical television fare. It’s a twisty and unique tale, that I can’t tell you how much I enjoyed. It’s quite simply put one of the best series ever to grace the airwaves of FX. The writing is the first stand out thing about the show. To craft such a unique and interesting tale with characters so rich and unique is so difficult to pull off. 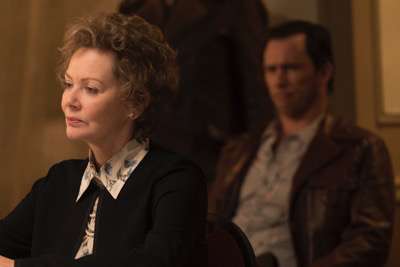 The acting is also top notch as well. Kirsten Dunst and Jesse Plemons are wonderful together and it’s great to see Jesse Plemons step up to the plate. I’ve been a fan since Friday Night Lights and he really knocks is out of the park. also excellent is Patrick Wilson. He’s done such great work in the past, but here he truly excels. What a fantastic job he does.

Fargo Year Two arrives on Blu-ray in a transfer. It’s interesting to note that watching a television series in broadcast quality is nothing compared to seeing it in high definition. When you see a series on Blu-ray the colors just pop so much more. It really brings a different dimension to whatever show you’re watching and Fargo is no exception. It looks phenomenal, and you really can see the fine detail in close ups and especially the cinematography just pops. It’s brilliant. 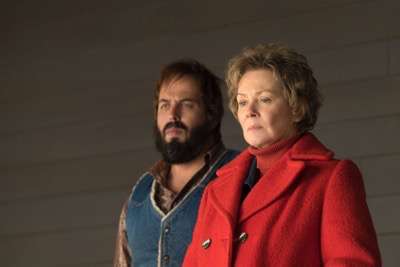 Fargo Year Two has a host of interesting special features that go along with the quirky nature of the series. There’s a two part making of documentary which is really interesting, a featurette about true crimes in the midwest, a skip sprank TV Commercial, The films of Ronald Reagan with a commentary by Bruce Campbell, and finally, there’s a really interesting joint interview with Noah Hawley, Keith Carradine and Patrick Wilson titled Lou on Lou. It’s a great set of features that goes deeper than just the standard deleted scenes and gag reel.

Overall, I have to tell you, I love Fargo, it’s one of the most complex and interesting anthology series out there. I highly suggest taking a look if you haven’t started the series. Like with most anthology series you don’t have to see the previous season to jump in, but it’s great if you did. I’m really excited to see what Year Three brings!

Fargo Year Two is out now on Blu-ray!