Home / Big Mike • Q and A / Big Mike Has Some Fears & Beers with The Friday the 13th Part 4 Cast and Friends! Judie Aronson! Lawrence Monoson! Joe Zito! And More!

What’s up, kiddies? Big Mike here with the lowdown on the recent Fears & Beers screening of Friday the 13th Part 4: The Final Chapter, brought to us by Screamfest Horror Film Festival. This screening and panel took place at the Ahrya Fine Arts Theatre on Wilshire as opposed to its usual location at Mann’s Chinese 6 in Hollywood.

Friday the 13th Part 4 seems to be the favorite amongst us Friday fans. This was to be the last of the Friday the 13ths until Paramount got sick of counting all the money coming in and greenlit part 5 to open up just eleven months later. (The shortest time between the sequels as the moderator, Brian Collins shared.) Part 4’s director, Joe Zito, was in attendance along with cast members Judie Aronson, Carey and Camilla More and Lawrence Monoson. 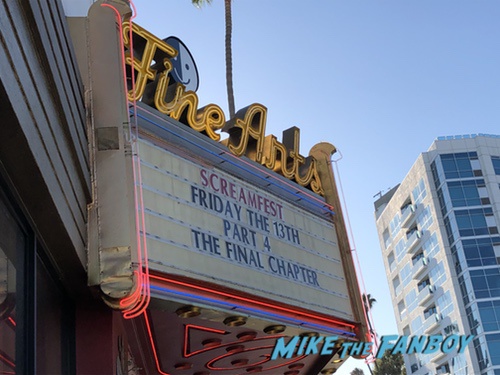 I had been wanting to meet director Joe Zito for quite some time and heard very good things aboot him. He was the first announced to attend and anything else would be gravy after that. I wanted to add him to my Crystal Lake Memories book along with anyone else I could and this was the perfect opportunity. The Fine Arts is a nicely sized vintage theater, meaning no stadium seating, and it was very well attended. Check out a flick there if you ever have the opportunity. I was one of the first few to arrive and figured Joe would early, as the folks of the older generation usually are. I was right. I claimed my seat inside the theater and waited for him to finish his conversation with the moderator before calmly approaching him to sign my book and two Blu-ray slips. He couldn’t have been more nice and gracious. He was happy to sign anything and everything I had and we had a nice quick conversation. He mentioned how he really appreciates his fans and doesn’t charge for autographs and would love to do a convention if ever asked, so horror conventions: please ask him. 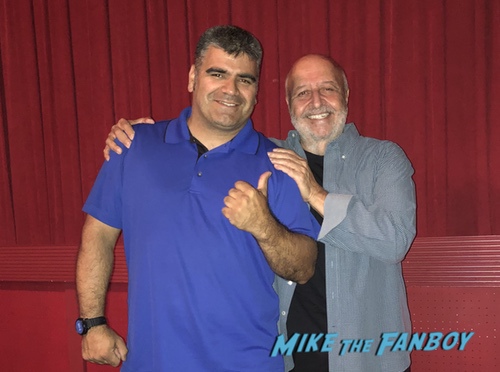 The More twins and Judie Aronson showed up not long after that and they were all very kind and signed and took photos for fans up until it was time for the intro to the movie. Lawrence Monoson (The Last American Virgin) was a surprise addition but he kept moving around so I figured I would just try after the panel with everyone else. 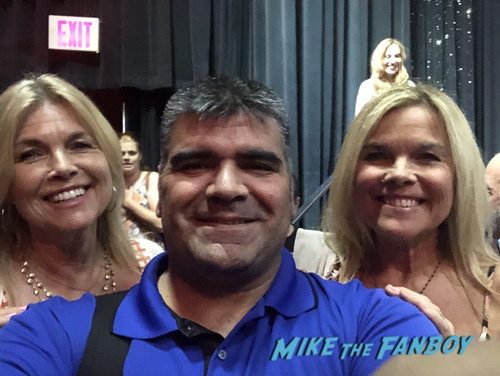 It was only my second time seeing Part 4 on the big screen. I got to see it during a marathon of the first eight parts a couple of years ago at the New Beverly Theater, but this was a bigger theater with a bigger screen and just as cool. After the crowd enjoyed watching the feature Joe proclaimed that the actors and actresses were definitely right for their roles. He praised the casting directors for doing a good job. The characters were more real this time around and that is one of the things attributed, along with Ted White’s menacing performance as Jason, to making Part 4 the fan favorite of the series. Joe mentioned there were some things he insisted on and fought for. He said he definitely wanted to have a boy and his dog in the script, along with the twins and Tom Savini to do the makeup and effects. The twins said that they both got hired because the one that came in to audition mentioned she had a twin and was told to bring her in next time and who doesn’t like an instant callback? The rest was history there. There was word on the set that Crispin Glover was hitting the clubs around town and doing this crazy dance and the crew just had to see it. There was no rehearsal for that scene. Joe wanted a genuine reaction from whichever twin Crispin’s character hooks up with and it was definitely a surprise for her. I must say, it is an historic dance. I’m glad it made it into the movie. It was confirmed that the song he’s actually dancing to is AC/DC’s “Back in Black” and I must finally learn those wicked moves. I mean, hey, it works for Crispin’s character and he gets to break a bed with a hot twin. The bed wasn’t supposed to break, by the way. 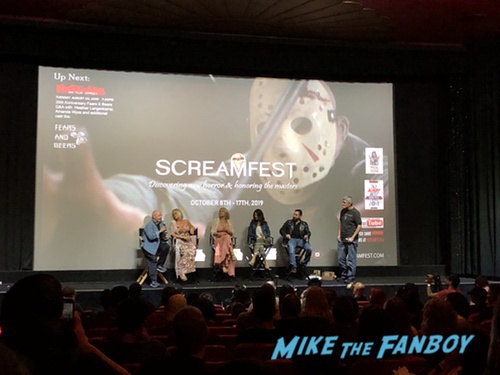 Some things that were pointed out that I must’ve forgotten aboot the movie was that the dudes had the more gruesome death scenes. Joe wanted to turn the tables a little bit with some of the characters. He had a “pretty boy” meet his crushing demise in a shower along with his buddy getting the business end of a harpoon poked into his poker during an unfortunate night swim. Granted those dudes didn’t get the ol’ hypothermia like Judie Aronson did during her scene in a raft. You can read aboot that in the Crystal Lake Memories book or the awesome documentary of the same name. What I never knew was she had an even harder time with her water scenes that took place during the day with the other cast members. She had to be pulled a little earlier than the rest from shooting that day. Joe owned up to keeping Judie in the water at night a little longer than he should of and they are cool with each other. He even pointed out that he had no problem with Ted White who expressed some dismay on the documentary that he had all those years ago. That was nice for us fans to hear. The twins seemed to have the easiest death scenes of everyone as one had a stunt woman perform her death and the other was a silouette impaling. I also totally never realized that Jason is the only one to meet their demise with a machete this time around. Talk aboot fun facts! This is a very fun family friendly post to write. Just thought I’d add that.

When the cast was asked what their favorite scenes to shoot were they all agreed it was the party scene where they were all together. That was the most fun they had on the set together. The only regrets I heard were from the twins and how they hated their wardrobe except in their first scene. It’s a little preppy, but when you’re a babe you can get away with that kind of stuff. They all still looked great. I hope I age that well, and let’s be honest, I am! When the panel ended everyone except Lawrence Monoson stayed to sign and take pics with the fans. I asked him to sign my book as he was walking out of the theater and he almost grabbed my marker before saying he was going to come back. That’s usually a clear indication they’re leaving and this was no exception. I still got the rest of my items signed by everyone else and everyone seemed to have a cool time. Judie Aronson even had her own Crystal Lake Memories book and hockey mask that she was asking her cast mates and director to sign and that was bad-ass. She only lamented that she forgot her poster which she says she always does. Hopefully there will be another reunion of sorts in the future either around town or at a convention. Check Facebook for more Fears & Beers screenings at the Chinese 6 in Hollywood. The next one scheduled is A Nightmare on Elm Street on August 20th with a couple of the cast scheduled to attened. Don’t miss out and stay outta my way! Peace out and party on. 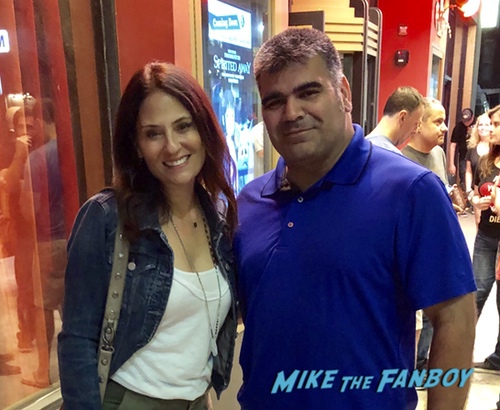