Today there was a q and a for the Netflix series Grace and Frankie with Jane Fonda and Lily Tomlin. Both actresses of course are legends and since I enjoy the series I figured would go.

First off, when I checked in, I told the woman that my friend was running late and he’d be here in a minute. She said nothing, so I figured it was fine.

Perhaps her ears were clogged with cat hair because once Scotty arrived she was bewildered and perplexed and said, “We don’t let any guests come in after you’re already inside.” And then just stared at me.

I knew right then and there I should have just left, I just had a feeling. The two ladies who were dressed, not like professionals checking people into a q and a, but like they would going to build a new playpen for their cat. Because clearly with the lack of personality and personal hygiene a cat would be the only creature willing to live around them. Just had to be said.

I walked back inside and as I was saying hello to Pinky, a woman grabbed my jacket which was on my seat and screamed, “Maybe I should just throw this on the floor and sit here!”

I’m like, what crazy pill did these people take today. God, where are the Emmy q and a’s and why do I have to slum it with these low rent freaks?

To be honest, there was a woman in the front and I think she was eating her own hair. I wish I made this up. Honestly, how could you?

I asked the lady who now had my jacket in her hand, what her problem was, and I heard a lengthy tale of how another woman threw her jacket to the ground as she was going to the bathroom.

That lady, let’s call her the Angry Mustached Barmaid, because that’s what she looked like, was causing such a ruckus in the theater, even the cat ladies peered their heads inside and then ran back out because God help anyone if they actually did their job.

Now, Angry Jacket Lady, who was her own kind of crazy pulls out crackers and starts to eat and try to have a conversation with me at the same time. She kept saying, “I want to learn…. I want to absorb…” and then anytime the Angry Mustached Barmaid said anything, Angry Jacket Lady jumped up and tried to fight with her again.

I think it was the most excitement these people have ever seen in their lives.

This all happened before the screening.

Finally the lights went down. We watched two episodes of the series and then the q and a started. I was so not wanting to be there at this point that the q and a didn’t intrigue me as much as it should have. 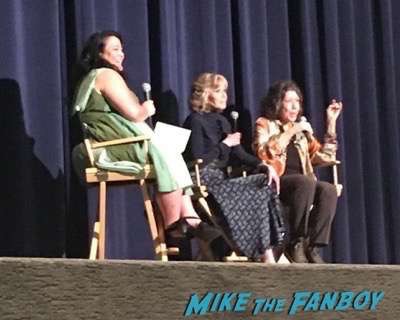 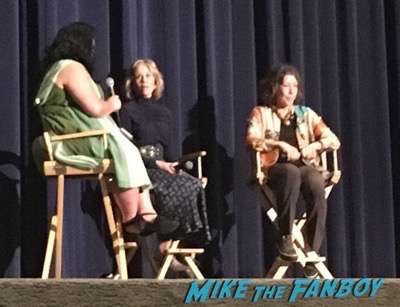 I will say that Jane Fonda and Lily Tomlin were so cute together, talking about the series, 9 to 5, etc… 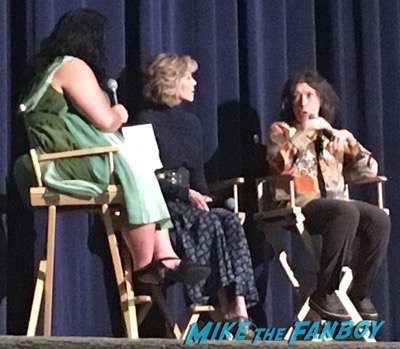 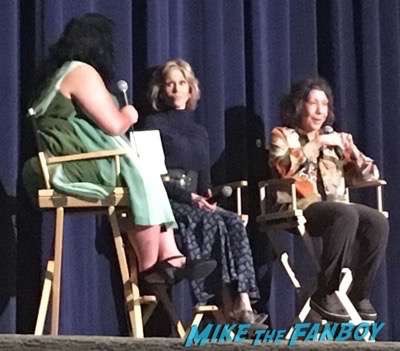 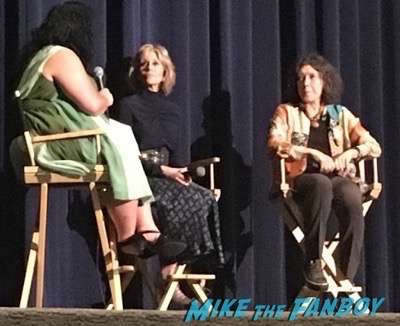 I got a text saying that they signed outside… Of course, I tell people about an event and they get them outside. Ask me if that’s happening again.

Then… The q and a ends and I swear I’ve never seen 78 year old women run so fast in all my life, Pinky got up to the stage but didn’t stand a chance, they were gone like their asses were on fire.

It was really fucking annoyingI have to tell you. I can’t say too much, I’ve been so blessed with q and a’s this year, I mean… It’s kind of ridiculous. However, a note to people holding the q and a’s… people don’t want to vote for shows or stars who don’t give the people in the audience the time of day. Just saying.