Nowadays streaming shows seems to be the normal way to appreciate television. On the rare occasion, you might conduct a screening party for a big show, but for the most part we pile a few episodes up so we can binge them. Recently I got addicted to Netflix’s “Mindhunter” and now I can understand why everyone loves the show. To celebrate the second season, the Paley Center hosted an evening with the creative team behind the critically acclaimed show.

Originally, “Disenchantment” was scheduled to promote the second season as part of the annual fall TV Preview series at the Paley Center. However, two weeks leading up to the event it was pulled and replaced with “Mindhunter.” Scheduled to appear were two of the leads Holt McCallany and Anna Torv with director David Fincher joining them. Having recently binge watched the first seven episodes in one night I was extremely excited to hear/listen from the creative team now that I had caught up with the series.

However, I knew there was a miniscule chance anyone would interact after the screening. Over the past several years, Paley Fest and Paley Center events have dramatically changed for the worst. As an organization who promotes itself as a place to “meet the stars” in almost every advertisement, they’ve definitely gone with the zoo model of “you can look, but can’t interact” mentality. I remember at one of my first Paley Fest events almost a decade ago, one of the celebrities mentioned to his co-stars while signing on stage “we can’t stay long as (Paley) said we have to leave right away.” I found that quite peculiar despite them wanting to interact with their fans and over time, that’s become more commonplace for almost every Paley event.

Starting in 2014, Paley Fest moved to the Dolby Theatre for their annual events, but then charged several hundred dollars per ticket and essentially gauged most fans to overpay for orchestra & season tickets for a chance to “meet” their favorite film/TV stars during events. However, if you peruse the site there are plenty examples of some success, but mostly heartache with the new system.

Back to the “Mindhunter” event. Leading up to the event I joked with Mike about attending, but he shared his reluctance as another event was scrapped with the “Batwoman” cast/creative team being removed altogether despite the heavy advertisements still promoting it as a premiere event for the Paley series. Regardless I was excited to hear from the cast and especially David Fincher since he rarely does Q&As. However, everything started signaling this could be a disaster. 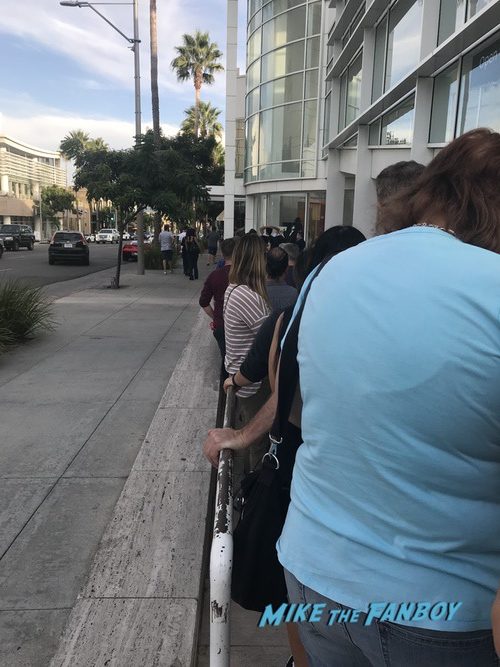 First the reception for the event was changed from after to before, which was whatever, but the check in process was frustrating to say the least. Not only did I arrive 45 minutes before the “doors open/reception beginning” (almost 90 minutes before the event), but the line was already wrapped around the building with staff members suggesting “you should claim seats” right away by staking a claim with a jacket or a brochure. I decided to skip the reception and tried to claim a seat right away only for 85% of all the seats to be “taken” despite the event not starting for another 45+ minutes. Dozens of guests loudly complained after I sat down and it appeared they oversold the event resulting in Paley creating faux rows with extra chairs blocking the back (needless to say it was “fun” leaving). Additionally, all throughout there were “RSVD” signs with most not even being claimed (until moments before starting) and/or someone sitting down 10-15 minutes after the screening started (They took up maybe 20-30% of the auditorium). 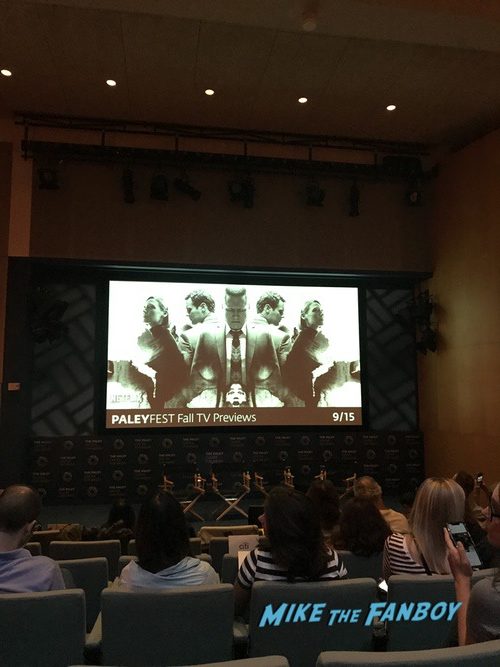 The third episode of season two was played before Holt McCallany, Anna Torv and David Fincher came out. As an added bonus, Jonathan Groff (the third lead) participated for a few minutes via SKYPE and joined in before getting back to rehearsals for “The Little Shop of Horrors.” It was a very fun and interactive Q&A between everyone, including the moderator. 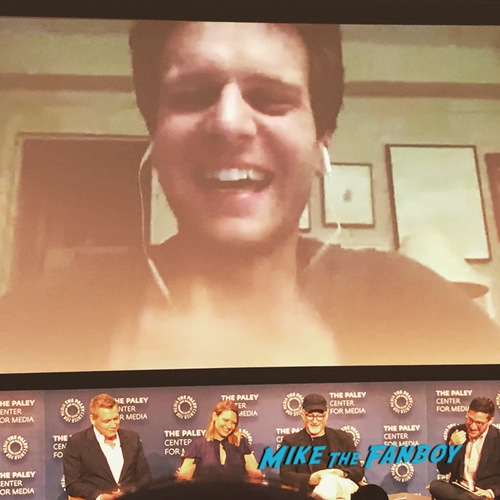 When the Q&A ended, security guards came on stage (who were off to the side) and literally had their backs to the audience blocking everyone, which forced all of the talent to exit immediately. Holt McCallany attempted to lean and waive to the crowd, but almost everyone was visibly frustrated. Not only was the crowd unable to ask questions (which is fine considering the quality normally asked), but not even the talent could thank the audience for coming out. 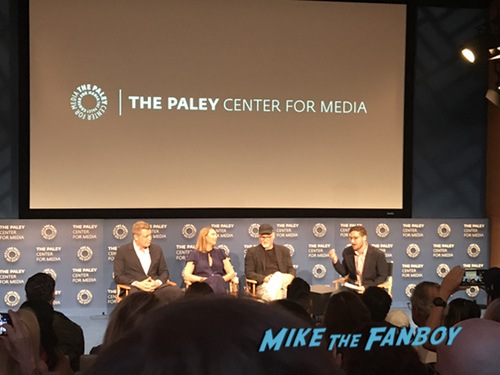 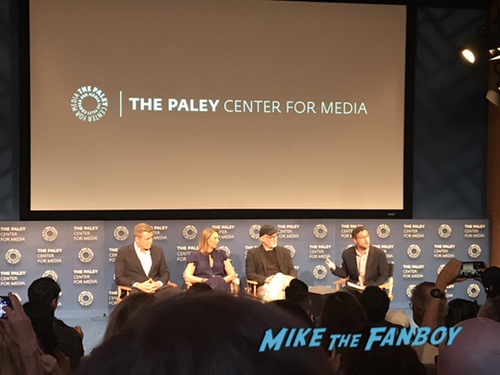 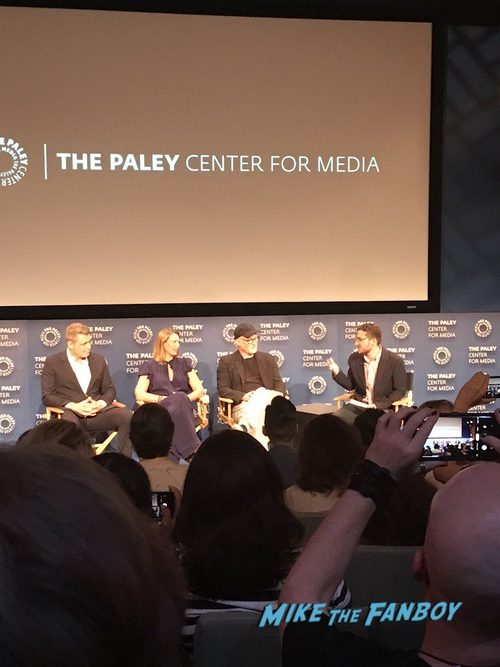 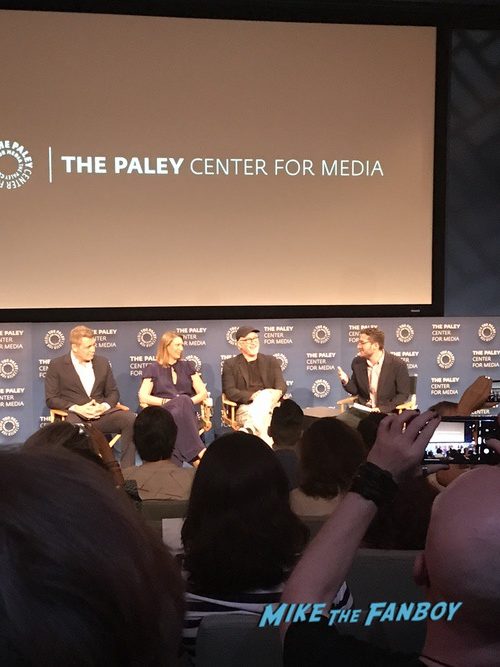 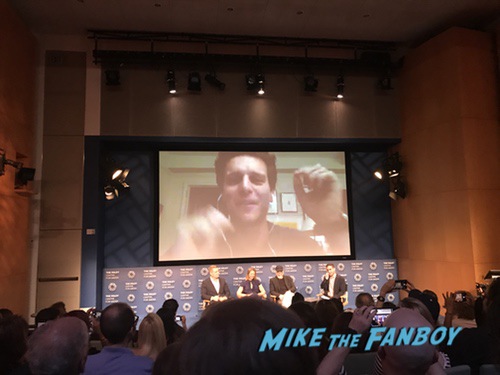 Considering they’re an organization that prides itself on promoting “fan events” for the general public, why even bother? By no means are celebrities obligated to take selfies or sign autographs, but this would’ve been a huge waste of time if you’re not a diehard fan wanting to see your favorite performers live. Despite enjoying the episode and cast interactions, it was a poorly planned Paley event and was certainly frustrating. Thanks to not caring about the reception I legitimately got one of the last “eligible” seats available. Considering this quick decision enabled me to enjoy the event I couldn’t imagine how frustrating and infuriating it would’ve been with a +1 struggling to find an additional seat, let alone “two together” 45 minutes beforehand. Overall, avoid all Paley events unless you want to see a Q&A that will inevitably wind up on YouTube or another streaming platform. They might preach fan friendly, but it’s more like fan avoidance.