There are just sometimes when it doesn’t pay to go to an event at all.

You just never know the set up or how it will be. Sigh…

Dallas headed out to a rally for President Obama and former Secretary of State Hillary Clinton.

Sadly, he was a bit blocked from getting anything. Doh!

Well…yesterday was a total failure.

I got there at 8:15am. 20-25th person in line, something like that….waited for hours in the 95 degree heat. LOL. They let us in early at 12ish….go through the security, get in to the setup, got a spot at barricade, I think I’m great.

Five minutes later, the venue is filling up with all the people in line, and slowly one by one, people start trickling in standing in between the podium and the barricade I’m at.

Apparently for this event, there was a separate barricade that went all the way around the stage where they walk around to shake hands, and only VIP people with physical tickets (that went to Democratic party members, volunteers, local clergy, etc) were able to stand in that space….so I was about 7 rows of people back by the time they walked out at 3:40pm…and a barricade blocking me from walking forward to push or shove or get anywhere near them when they started walking around and shaking hands afterwards. LOL. 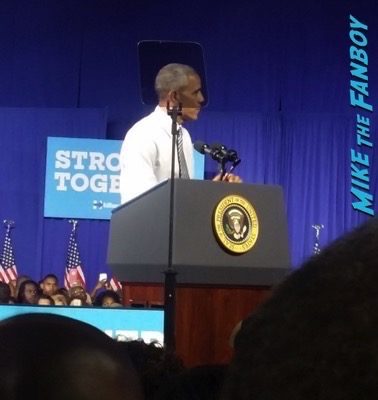 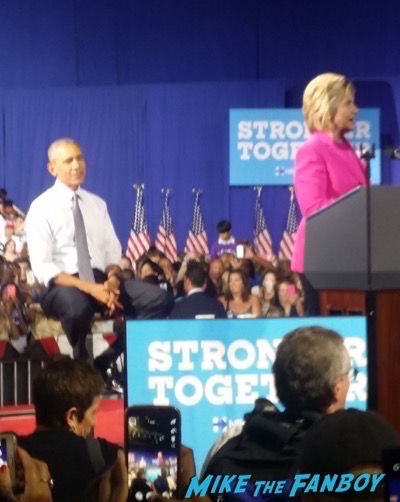 Such a waste of 9 hours standing on my feet. 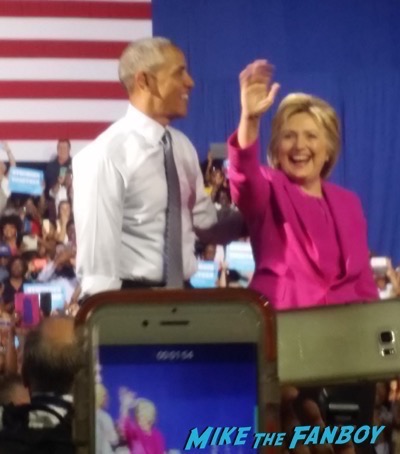 I waited by the exit they went into when the crowd had kinda trickled out, saw the dealers waiting as well….the secret service lady came out with about ten or fifteen Obama books that people were able to successfully pass to whatever guard was walking around the special barricade with him….and she wouldn’t take anything else backstage then, said they were already gone….which was a total lie, because I went back to the garage where I parked my car, and sat there for an hour because “the president’s motorcade has not left the convention center yet” so all of Charlotte roads were shut down. LOL.

Awful awful day..the speeches were good, cool to see the President…but I would’ve gotten there at 12 and stood at the back (or just not drove the 4 hours to the event at all…. :/ ) if I had known there was a special ticketed section and I had no chance at all of meeting them….never seen that before at a political rally….usually if you’re one of the first 50 in line, your guaranteed to at least shake their damn hand…that doesn’t mean they’ll sign anything for you or take a picture with you, I get that…but you still “usually” can guarantee a handshake. I’m pretty pissed tbh. Sorry for the rant. Fanboy fail to the extreme though.