This is an oldie but a goodie!

I have loved Florence Welch and consequently Florence and the Machine for a long time. When their debut album came out, I fell in love. THAT VOICE! From beginning to end, Lungs is an amazing piece of work man. So good.

Florence Welch and the machine were doing a talk show promoting the album and I had to head out.

Check out this weeks Throwback Thurs below!

I know a lot of people will look at me with confusion when I say, “I went to try and get a picture with Florence and the Machine!” I can almost hear crickets in the background; however her debut album, Lungs, is stunning. I have literally not stopped listening to it and am so excited to try and get her. I brought a couple import vinyl singles with me to get signed, and a CD as well. Also appearing on the same talk show is Mr. Rushmore himself Jason Schwartzman and rock legend Rod Stewart. This looks to be an interesting day, so let’s dive right in!

4:21 p.m. – I just arrived. There are about 9 people here waiting for Rod Stewart, and a few people I think are here for Jason. No one else is here for Florence but me. Sigh…

4:31 p.m. – It’s a tad chilly, and everyone is talking about whether or not Rod will come over to sign. Of course I have to pipe up and say, “I could care less about Rod.” LOL… “I’m here for Florence!” (I did bring an album for Rod just on the off chance he comes over).

4:45 p.m. – I went around the front to take a look at the set up. I missed Echo and the Bunnymen because they went out the front, and I really want to get Florence. If you have never heard of her check out www.florenceandthemachine.net.

4:55 p.m. – Sigh… I just found out that Florence is already inside. Bummer now I have to wait until the entire concert is over. Sigh, I better get ready for a long long night.

5:09 p.m. – There are a lot of people here for Jason Schwartzman. I’m a little shocked, I didn’t think he had that extensive of a fan base. Who knew…?

5:22 p.m. – I thought that Rod Stewart would have been here by now. The band is sound checking, I’ve heard “My Cherie Amour” for the third time now… ah, the classic songbook. Good times.

5:44 p.m. – The crowd coming to the concert is decidedly older skewing than most of the crowds I have seen lately. I mean the median age is probably 51! LOL… I’m shocked they have them outside, it’s chilly out. I heard that Rod Stewart would not perform unless the weather conditions were perfect and it would not harm his voice. I guess I understand that. One must protect their voice!

5:56 p.m. – The gates are opening, “My Cherie Amour” is playing yet AGAIN and Rod is walking out. Everyone calls out to him, and he waves and walks off. People are very disappointed. I really don’t think that he will come over and meet with anyone, just a hunch.

6:09 p.m. – Ah, the gates are opening again. Oh, Jason Schwartzman is here! Everyone is calling out for him, and he just walks on over as calm as can be. He starts at one end of the barricade and just keeps signing for everyone. I swear he is so nice and patient. 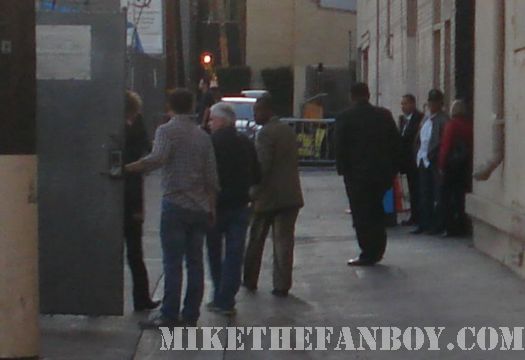 6:14 p.m. – I have my Rushmore DVD, Rushmore insert map, and a postcard from Jason’s new show Bored To Death. He signs my map and DVD and then finishes signing for the rest of the barricade. He is taking pictures with people, and being so friendly. 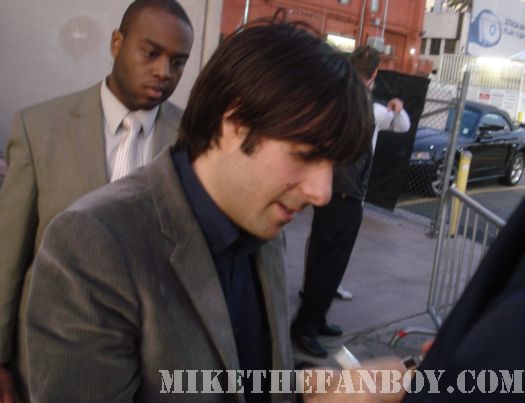 6:19 p.m. – On the way back, I have my Bored to Death card, and he stops to look at it, and almost asks me if he could sign it. LOL, I asked him of course, and he was like, “Of course, I’m happy to.” Such a nice guy. He then signed a bunch more and went off inside. 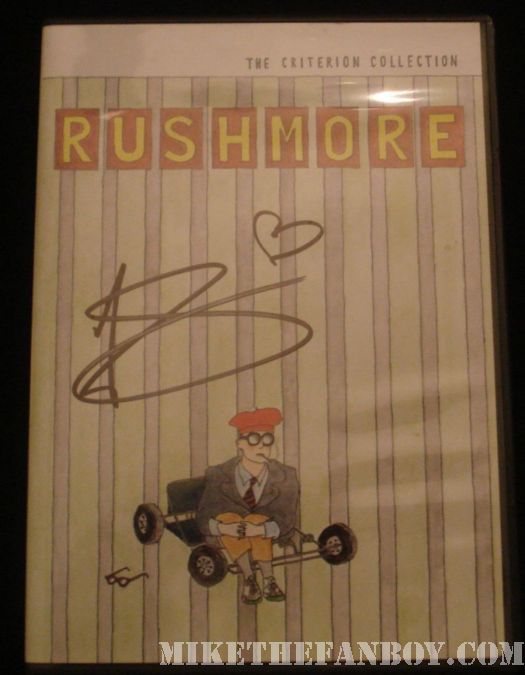 6:32 p.m. – Oh, My Cherie Amour is burned into my cranium. I mean like seared into my skull so that it will never leave… never go away, it will always be there, festering inside my mind…. Damn you Rod Stewart! Damn you! 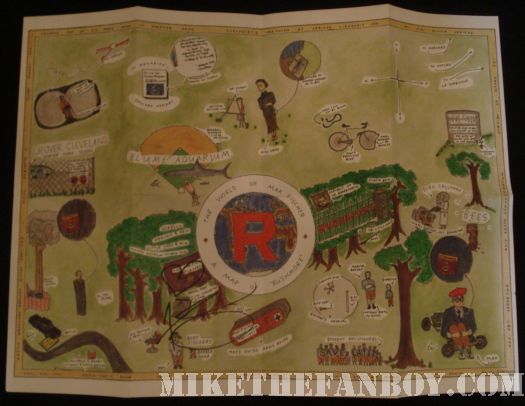 7:04 p.m. – I’m doing a walk around the theatre now. I just have this horrible feeling Florence is going to leave out the front and I’m going to miss her… Sigh…

7:18 p.m. – Well, so far nothing the band is not playing and Rod is doing an interview. It should be close now…

7:33 p.m. – It’s getting really cold now, There is the most adorable Nightmare Before Christmas stuffed dog in the store… it’s the pretty little one that I adore
You’re the only girl my heart beats for, AHAHAHAHAHAHAHAH I can’t get these damn lyrics out of my head… Damn you Rod Stewart… Damn you! 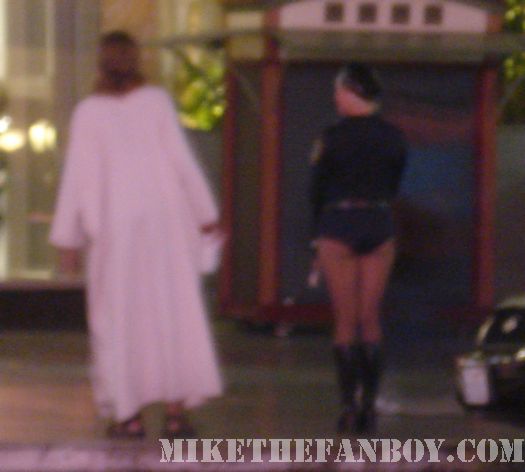 7:56 p.m. – Alright enough of this tomfoolery and malarkey… I’m heading back to the other side of the theatre now. There are about 5 people hanging there now still waiting for Rod. Everyone keeps asking me about Florence though, and I feel like I should get something extra for promoting her like I am! LOL…

8:15 p.m. – I’m going around to the front again. I just have this feeling that she will leave from the front… I can’t shake it.

8:23 p.m. – Okay, a guy that was hanging out in the back just ran to get me. Apparently, Florence just came out, and is at the barricade! Crapsticks!

8:24 p.m. – I’m running down Hollywood Blvd with my bag and junk trying to dodge innocent or not so innocent toddlers and woodland creatures.

8:25 p.m. – I have never ran through a crowd this thick before, It’s like I’ve become my mother at Wal-Mart during the day after Thanksgiving sales trying to get the last box of stuffing.

8:26 p.m. – I just got here, and Florence is signing for people. One of the other guys got her to sign one of my records that I left with him and I got the other two signed. I ask for a picture and she says sure but finishes signing at the other end of the barricade first. I had my camera to her publicist so I can’t take any pictures lol… ah well. Florence comes back and I get my photo with her. She is so nice! I always like getting people when they are just getting out there, because they are usually so grateful that someone responds to their work. 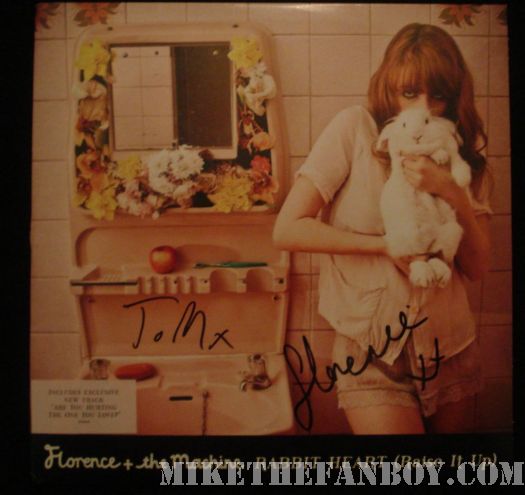 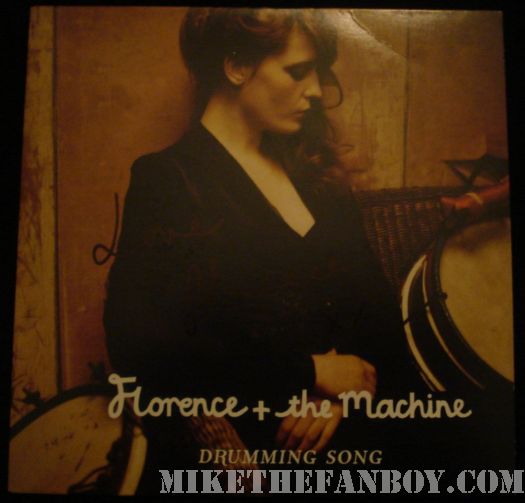 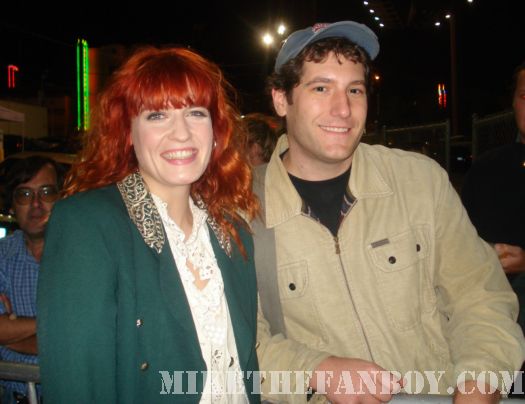 8:45 p.m. – Rod just finished, and they pulled his car halfway into the ally so all he has to do is slide in. Yeah, he’s not coming over. Not that I though he would mind you, but still. Do you have t pull the car into the ally…? Really? Were the throngs of people calling out to you too much to handle… was that it?