Home / NEWS / Forever Ago Fangirl Friday! Lisa-Lisa Headed Down To American Idol and Met The 2006 Cast! She Caught The “McFever!”

Talk about Forever Ago!  I went to see American Idol being taped a couple of times. the first time I had to wait in line all day and almost didn’t get it. Once inside, I had to stand in a mosh pit. Ti was fun, but I was so glad when it was over.  The second time I went, through a friend, as a guest of the show (which is the ONLY REASON there was a second time for me, come to think of it.) It was April 25, 2006, and we had special tickets that said we were in reserved seats, so we didn’t  have to show up until an hour or so before taping to be guaranteed to get in.
I guess I didn’t look the type, and was in too good a seat, because they did split me and my friend apart and moved us back further, which wasn’t a big deal because I didn’t really care about being seen on camera. The six finalists that night were Taylor Hicks, Katherine McPhee, Elliot Yamin, Chris Daughtry, Kelly Pickler and Paris Bennett.
When the show ended, we ran out to the back side of the sound stage, where we met all six of the finalists. I didn’t bring a camera  since they weren’t allowed and we had to check in our phones at the front gate —besides it was a flip phone, so even if I had it, any snap shots would have been useless.  I did tap a girl that was there to take a couple of pictures with Chris Daughtry and Kelly Picker, but I didn’t get her contact info she never emailed them to me. I did wind up with a very cool souvenir for the day, my VIP ticket signed by the top 6. Not the biggest year for Idol, but Chris Daughtry did ride pretty high for a while after that, though willer Taylor Hicks sort of vanished. I met Kahterine McFee’s mother in the back lot, and she gave me this swell “Vote for Katherine” button. One thing I remember vividly is how great she sounded in the studio and how “pitchy” she was on TV— guess it was just the room acoustics that night. 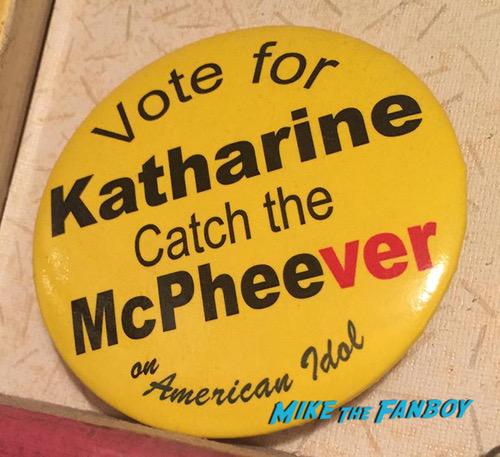 In 2010, I went the Paley Festival’s American Idol night, and I was able to get Paula, Randy and Simon to sign my program. I think I got a photo with Simon that night as well, but due to my careless filing system, I couldn’t find either of those, but at least I keep the ticket in a place that was easy to find.