Marsden, Headey, and Reedus are college students as well as roommates. They all take a Communications class with Bogosian as their professor, in which the subject of gossip is brought up. For their final project, the three decide to start a rumor and track the results. One night, while at a nightclub, they run into Hudson and her boyfriend Jackson. It is common knowledge through the campus that Hudson is saving her virginity for marriage. Headey, in particular, has a problem with Hudson’s wealth and sense of entitlement. Furthermore, Hudson seems to have started a rumor about Headey having sex with Bogosian.

While at the party, Derrick meets a girl and brings her upstairs. At this point, the girl becomes ill; Derrick then Marsden notices Jackson and Hudson in the adjacent room kissing, but Hudson rejects having sex with him. The roommates proceed to begin a rumor that the two had sex. Hudson hears the rumor, but denies it to her friends and becomes convinced she was raped, reports Jackson, and has him arrested and expelled.

It’s eventually revealed that Marsden and Hudson came from the same hometown and were a couple in high school; much like Jackson, Hudson refused Marsden and claimed he raped her. He denied the allegation and said Hudson made it up so her father wouldn’t be upset with her; as a result, his popularity at school skyrocketed, so he moved after graduation and intentionally wanted to spread a rumor about her as revenge. Marsden manages to manipulate Jackson into thinking they’re both victims of Hudson’s lies. Marsden goes to Hudson’s dorm to confront her, but she attacks him and he leaves.

The next day, Hudson is pronounced dead and, because of their past (plus the new marks on Marsden’s face), campus police accuse him of killing her. Investigators come to his apartment to search for clues and their suspicions intensify. Under the overwhelming psychological pressure, Marsden confesses to raping Hudson to Olmos, the head detective in charge. The investigation was proven to be a setup by Headey, Reedus, and Bogosian, who had been tracking Marsden’s past ever since it came to light. To Marsden’s surprise, following his admission, Hudson shows up, alive, proving you just can’t believe…GOSSIP. 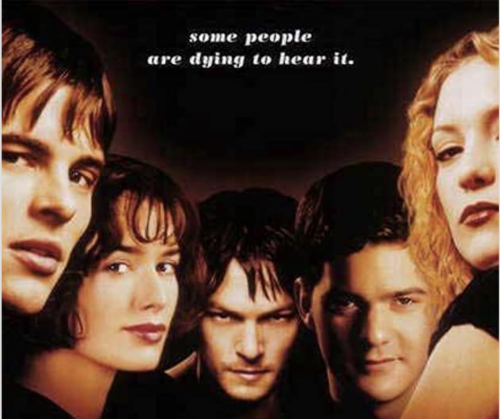 As you can see why I put “thriller” in quotes…what was moving towards a fun, thrilling conclusion turned into a copout ending moved it more into a Lifetime-esque film that got lucky by being released theatrically, because at the time, these kind of “young people thrillers” were all the rage. Sadly, it missed the mark and wound up not doing well in theaters because of said ending. Otherwise, it was a decent film until that point. But hey…it didn’t ruin any of these people’s careers!