I love seeing these old photos, it’s such a great reminder that after all the hard work, the sweat, the tears, the photo fails.. That people have been fanboying not only for years, but for decades, centuries even.

In this awesome photo a young Frank Sinatra is getting an autograph from baseball legend Lou Gehrig.

It was taken in Cincinnati Ohio at a Yankees game.

So many things about this that I love. Frank Sinatra… Legend. Lou Gehrig… Legend. And here’s one of them paying respect to the others work by acknowledging that they are a fan.

Even people who are at the top collect autographs, fan out and show their appreciation. It’s always funny to me but even people who grew up in the industry and who could care less about an actor, might freak out over a musician or athlete.

I would never have pegged Frank Sinatra as a fanboy, but here he is.

It just goes to show…. Everyone is a fan! 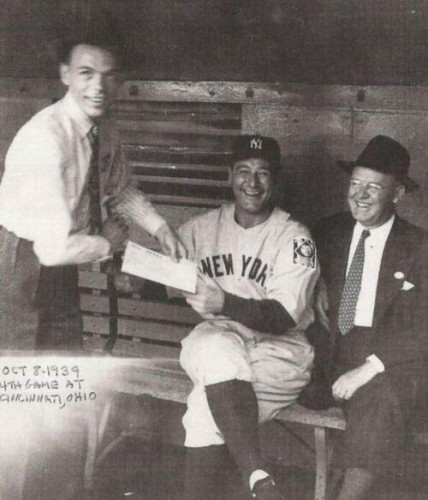