We all know by now that singing legend Ms. Whitney Houston passed away yesterday… While I never had to opportunity to meet her, I know a lot of people had tried, and were not always successful. Ms. Houston was a tough one to get.

Check out Franky Went To Hollywood’s recap after the jump!

On HALLOWEEN NIGHT a long time ago, BOBBY BROWN was scheduled for a visit on a talk show. I knew WHITNEY had to be with him, I just knew it. I packed this LIMITED EDITION REMIX BOX SET with me just in case! I had an old ALBERT WATSON book called “CYCLOPS” with a few pages of BOBBY BROWN photos in it. Bobby arrived and jumped out of the SUV. He was so excited to come over.

No one had realized she was in the back seat. Demure, wearing an ED HARDY hat over most of her face. Bobby gets to me and is tripping on the photos in the book, he says he has never seen the book! That’s when it goes down! “WHITNEY! WHITNEY! Come see this nice man’s book with photos of me in it! GET YOUR ASS OVER HERE!”

They go back and forth a bit, and finally she comes over! I lunge for my box set and ask her to sign it!

She takes the sharpie and goes for it! Her sweaty arm smearing it a bit! She takes a photo with my friend, I ask for one and says no, as if to say I signed your fucking album already! And takes off, and hides further down were we cannot see her. 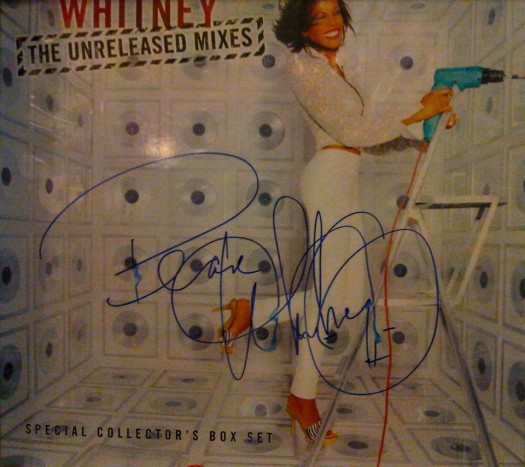 Thanks for signing my album even though you didn’t want to WHITNEY. I ♥ U, and always will.

Ironically, I just spoke to WHITNEY on Monday the 6th at the Beverly Hilton and she looked stunning to me. ♥

I was there for the OSCAR LUNCHEON when she arrived for Grammy Week! I will never forget her voice saying, “Hi” and waving at me! R.I.P. WHITNEY† You have been looking for rest for years †