When it comes to cult classics there’s nothing that fits the mold more than Alex Winter’s Freaked. Out now on blu-ray, Freaked is a unique creation to say the least. If you’ve never heard of the film, you really need to check it out.

Some films are too bizarre to properly describe and after 20 years, “Freaked” fits perfectly into that category. Coming off the success of the “Bill & Ted” franchise, Alex Winter created “Freaked” with his fellow “Idiot Box” collaborators Tom Stern and Tim Burns. Much like the cult MTV show “Idiot Box,” the film features unconventional and surreal absurdist humor. 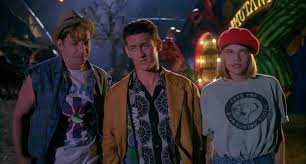 Beloved former child star Ricky Coogin (Alex Winter) appears on “The Skye Daley Show” to explain how he went from one of the most beloved celebrities to a name that makes multitudes scream whenever he’s mentioned. Ricky is recruited by the evil corporation EES (Everything Except Shoes Corporation) to promote Zygrot 24, a controversial, toxic fertilizer. After being paid handsomely to be its spokesperson, Ricky travels to South America with his best friend Ernie (Michael Stoyanov). 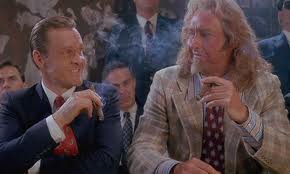 The obnoxious duo arrives in South America’s Santa Flan amidst a large protest of environmentalists against Zygrot 24 led by the attractive Julie (Megan Ward), who catches Ricky’s eye. Both Ricky and Ernie trick Julie into believing their also environmentalists and she agrees to travel with them on an anti-Zygrot 24 protest. Eventually the hotheaded Ricky reveals his true self after some unflattering comments. While making their way across Santa Flan, the trio take a detour to see Freek Land, a freak show run by the demented Elijah C. Skuggs (Randy Quaid). What starts out as innocent curiosity soon turns into a disturbing real life nightmare when Ricky is transformed into Beast Boy and his friends are combined into a conjoined half man/woman being. 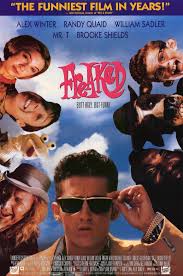 Ricky, Julie and Ernie join a group of misfits consisting of Ortiz the Dog Boy, Worm (half man/half worm), Nosey ( a man who possesses a gigantic nose as his head), the Bearded Lady, Sockhead ( a guy whose head is an actual sock), Rosie the Pinhead, Hideous Frogman ( a Frenchman in a scuba suit) and the Eternal Flame ( who can’t stop farting flames) . Together they devise a plan to leave, but will they be able to pull it off? 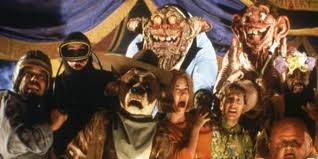 The first time I saw this film was during an impulse buy at Amoeba several years ago when it was first released on DVD and immediately fell in love with this crazy comedy. Honestly, it’s a really rewarding, ridiculous movie worth watching if you can appreciate absurdist humor. The original tagline for the movie is pretty accurate, “A thinking man’s stupid comedy,” and is a great midnight movie to discover. I believe Jack would agree with me on this one and would strongly suggest checking out this cult comedy classic. 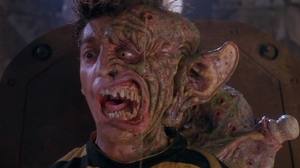 Like most movies “Left to die,” this film received a limited release when studio heads changed at 20th Century Fox and the people who originally championed the movie were no longer in power. Consisting of an impressive supporting cast: Randy Quaid, Bobcat Goldthwait, Mr. T, Brooke Shields, John Hawkes, Lee Arenberg and a certain A-List celebrity, who for the longest time was rumored and went uncredited playing Ortiz the Dog Boy, “Freaked” remains one of the best “hidden comedies” of the past two decades.

Unlike the out-of print 2-Disc DVD, this Blu-ray contains NO SPECIAL FEATURES! This was extremely disappointing especially considering how great Anchor Bay releases have been with previous special edition DVDs and Blu-rays. 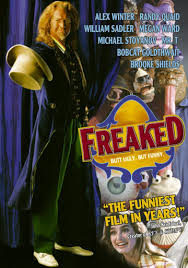 Freaked Is out now on blu-ray!