Who doesn’t love Thanksgiving… The stuffing, the mashed potatoes, and of course… The turkey! In the new comedy Free Birds you might have some explaining to do around the holiday table this year!

It’s not easy feat to tackle the subject of Thanksgiving for kids… There’s the messy pilgrims and Native American issues and of course what’s sitting in front of you looking all golden brown and delicious. 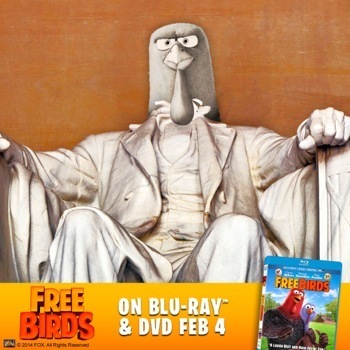 In Free Birds, Reggie (Owen Wilson) is a blue faced kind of gangly turkey who has finally figured out what happens to him and all his friends in November. He decides to try and warn everyone and all his friends. However, all the other turkeys think he’s crazy and shun Reggie even as he tries to convince them for their own good. 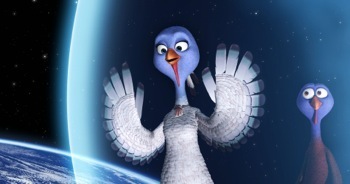 The elder turkey decides that there may be something to Reggie’s rantings but he tries to make Reggie the scapegoat for everything. Everything gets thrown into chaos when Reggie is awarded the presidential pardon and gets shuttled off as the president’s daughter’s new pet. 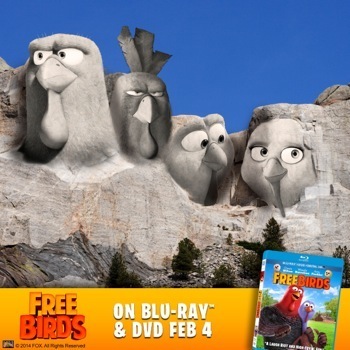 Reggie settles in to Camp David, and watches telenovelas on the Spanish language station while ordering pizza. One night Reggie gets a visit from Jake (Woody Harrelson) who is a big muscular turkey that claims he’s from The Turkey Liberation Front. Jake says he has been contacted by The Great Turkey and must time travel back to the first Thanksgiving celebration to try and save all the turkeys throughout history. 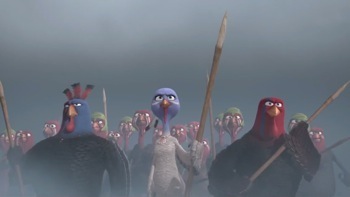 Reggie and Jake team up and get inside a secret lab where they find a time machine, which opens up a vortex and throws the pair back to the 1600’s. While trapped in the past, Reggie and Jake team up with some wild and crazy turkeys. It’s here that Reggie falls in love with Jenny (Amy Poehler) who is a straightforward no nonsense turkey and the daughter of Broadbeak (Keith David). 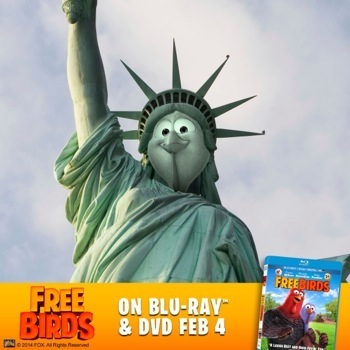 All the turkeys are getting rounded up for a big feast and it’s up to Jake and Reggie to stop the pilgrims from taking out all their friends.

While the jokes are probably best suited for a younger crowd there are still some thrills to be had and some laughs as well. In particular, Owen Wilson’s aw shucks charm really suits the movie well here. He may not be breaking the mold but as Reggie he adds some easy going fun to the proceedings. 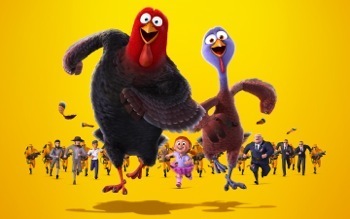 Free Birds looks great on blu-ray as most animated films do. The format is perfect for animation and the details are crisp and clear. The colors are brilliant and pop, plus the details such as the birds feathers really add dimension to picture quality. 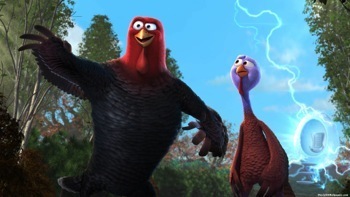 Special features on this release include, Birds Flipping History, it’s a live action short that ties into the film, Animating the Free Birds: The Main Course, which has some of the animators talking about how they did one of the dance sequences and Winging It: Animators in Action, which shows the animators in live action acting out the film. 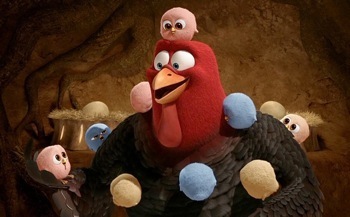 Free Birds is out now on Blu-ray! 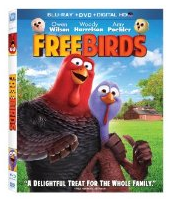