Home / JM • Reviews / Frozen 2 Movie Review! JM Says, “It fantastically follows up the first movie with a wonderful family film everyone can enjoy!”

The day after the happily ever after gets its sequel. “Frozen 2” fantastically follows up the first movie with a wonderful family film everyone can enjoy.

Queen Elsa (Idina Menzel) has finally embraced her powers-the ability to create ice and snow- while coexisting in her kingdom with her sister Anna (Kristen Bell), Anna’s boyfriend Kristoff (Jonathan Groff) and their snowman sidekick Olaf (Josh Gad). Three years have passed and all seems well in the kingdom of Arendelle until Elsa starts hearing a strange sound coming from the North calling for her. Suddenly strange rumblings begin happening in Arendelle causing an underlying unrest with its people. Eventually Elsa, Anna, Kristoff, and Olaf take off with reindeer Sven embarking on a new journey to discover the truth and rescue their kingdom. Elsa has harnessed her powers, but will seeking out the truth destroy her kingdom?

“Frozen 2” returns with the gang growing up and figuring out their respective places in the world. Whether you enjoyed or were forced to endure “Frozen” beforehand, this sweet sequel satisfies even the most malicious of naysayers with an enjoyable experience. Similar to “Toy Story,” “The Incredibles” and “Aladdin” franchises, “Frozen 2” continues the tradition of a solid sequel perfect for entertaining families and generating tons of merchandise revenue.

Rest assured anyone who was tortured by “Let It Go,” you won’t have to endure that type of pain again. Academy Award winning songwriters Kristen Anderson-Lopez and Robert Lopez have returned to solidify the Disney tradition of great songwriting duos (Alan Menken & Howard Ashman and the Sherman Brothers) creating catchy songs. After composing the now iconic songs “Let It Go” from “Frozen” and “Remember Me” from “Coco,” the dynamic duo delivers cute children songs, but can’t quite capture lightning in a bottle once again with a transcendent tune or even anything memorable. “Into the Unknown” is the highlight song from “Frozen 2,” but it won’t linger long after this holiday season and Disney cycle. If you’re expecting a great musical or memorable music, you’re sadly in for a huge disappointment. Then again sequels are tough.

Sequels became an amazing idea in the 70s and 80s thanks to blockbusters and surprisingly successful films. Unfortunately, it has become an exceedingly and excruciating epidemic developing into full blown Sequelitis with reboots, prequels and sequels being unnecessarily churned out yearly. The classic fairytale “The Snow Queen” inspired the first film whereas “Frozen 2” constantly alludes to old Norse myths and folklore. Much like seasons, “Frozen 2” embraces the change of fall and develops the characters into more well-rounded, interesting individuals. However, not every season is enjoyed and appreciated like others.

One of the best aspects of the movie is the acting and singing abilities of Idina Menzel, Kristen Bell, Jonathan Groff and the always amazing scene-stealer Josh Gad. Honestly, I wish there were more moments with the character Olaf and one day they eventually do a spinoff a la “Minions” with Olaf as the lead. For the time being, its wishful thinking. Joining the returning cast are Sterling K. Brown, Evan Rachel Wood, Alfred Molina, Martha Plimpton and Jason Ritter to solidify a wonderful voice cast. 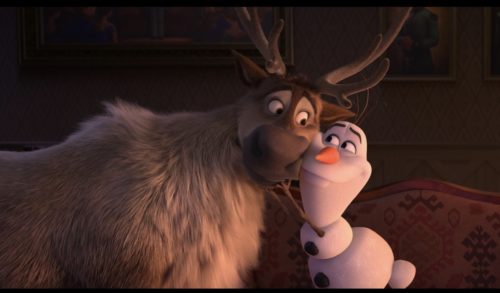 The striking color palette and character design definitely stands out, but considering the technical animation advancements there are minimal differences between the two films released six years apart. The same frosty look is fine, but considering the cultural impact of the first film you would certainly expect more. Unlike most sequels rushed to theaters trying to capitalize on its popularity, “Frozen 2” feels like an average attempt and doesn’t do justice to the first film. The best way to describe “Frozen 2” would be an “A” student handing in “B“ work because they could “skate by on a project” to keep their average. It’s just downright disappointing.

Saying Disney is disappointing would’ve seemed silly decades ago, but then again Disney practically owns most things now after acquiring Star Wars, Marvel and Fox properties. After all it’s about the merchandise. To quote Yogurt (from “Spaceballs”), “Merchandising, where the real money from the movie is made!” Clearly children’s entertainment has strongly shifted to toy-centric rather than quality stories. Besides, why did “Frozen 2” need to borrow ideas from “The Fifth Element”? Honestly, it’s eerily annoying. I’m glad it’s not like “Warriors of Virtue,” but to hit all the wrong notes certainly strains the ears more often than not.

During this holiday season, “Frozen 2” will be the best (and essentially only new) kids entertainment to enjoy. Don’t go in with high expectations and you’ll have an entertaining experience. It might be a letdown compared to its predecessor, but very few sequels exceed expectations. Worth watching, but don’t deal with the hassle of going right away.