I just got this wonderful report from the Los Angeles Times Envelope Q and A Geek Roundtable from Mike The Fanboy reader Anita! The panel featured Dexter… I mean Michael C. Hall, Johnny Galecki from The Big Bang Theory, Jayma Mays from Glee, Joel Mchale from Community and Sam Trammell from True Blood!

Now, I was there, but didn’t get in to the panel cause I was running around with my bag o’ tricks… I know I know you guys are shocked right? Lol…

Check out Anita’s recap of the night below and thanks for sending it in Anita! 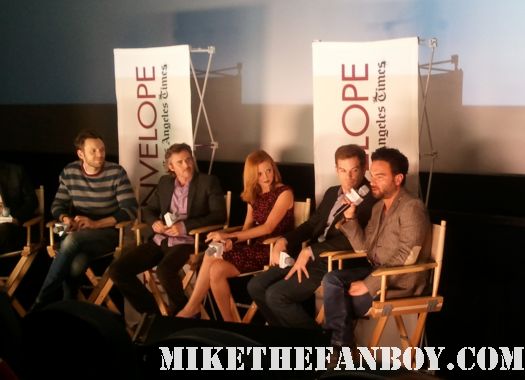 This was a very funny panel of people who had a good time playing off of each other’s lines. My particular thrill was seeing Michael C. Hall. I had the opportunity of addressing an audience question to him, and I asked who the featured guest stars would be in the coming season of Dexter.

Michael said there would be several guest stars in the new season including Colin Hanks, Mos Def (now just called “Mos”) and Edward James Olmos. It was a great evening – lots of fun!