It’s been a long time and when I mean a long time, I mean a Loooooooooooong time in the making. When you really like someone and you’ve never met them in this hobby, it’s hard.

Case in point… Geena Davis. I’ve tried probably seven or eight times. Nothing. And yet, I try, and try again.

I mean, she’s been in some of my favortie films, Earth Girls Are Easy, A League of Their Own, Thelma and Louise, Beetlejuice, just to name a few.

I heard, or I should say found out about a really low key little event and I had to try. I didn’t know if she would even be there, but on the list was another of my favorites Famke Janssen from X-Men. I love me some Jean Grey.

Scotty and I loaded up the wagon and headed over, probably way too early but we didn’t know what to expect.

The funny thing was, no security, just valet and the two of us sadly staring at everyone as they dropped hoping to see someone.

Time was ticking out and honestly, not much was happening. I only had a couple things with me for Geena Davis because let’s be honest, even if she does show, it would be rare to get her.

I also had a couple mini posters for Famke Janssen as well.

Finally a car pulled up and I almost spit. I was like Scotty… IT’S GEENA DAVIS!

I tried to get my stuff out, I was so nervous, I was shaking. I look over and Scotty didn’t pull anything yet, he dove into his bag like a ferret, but if I didn’t stop her, she would have been inside already.

Sweat rolled down my back… yeah, it was like I was Ace getting 4×6’s signed at the Cowboy Awards nervous.

I said, “excuse me Geena, would you mind signing an autograph really quick?”

She stopped, turned around and said, “Well, since you were so nice and have such a great poster sure!” I died. Right there, I was a pile of mushy goo.

She looked at my Earth Girls Are Easy poster and said, “Oh, you have Julie! I love her!” I tried to get out words, and said something about how she’s working on an Earth Girls are Easy musical. 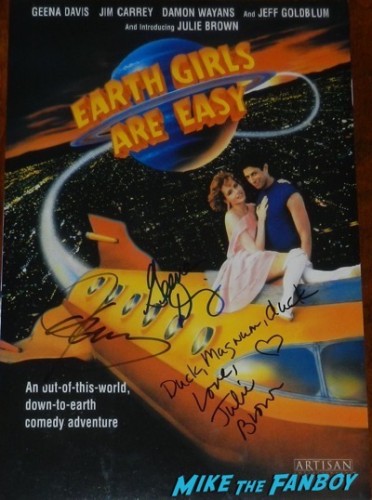 Then Scotty ran up and got a magazine signed. I tried to pull out my Thelma and Louise poster but it was caught inside my bag. Finally I said “Fuck it” and pulled it out ripping the board. Thankfully the poster was okay and Geena signed that too! 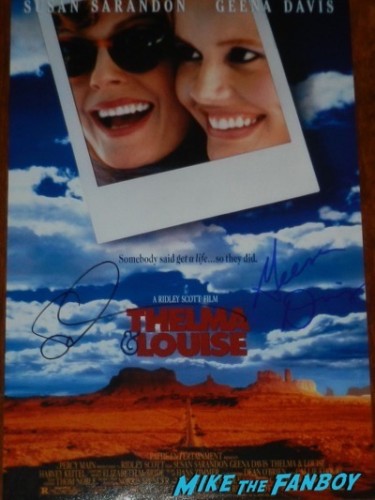 She was so kind, and since we waited so long to meet her it was such a thrill. She was so nice… After so many tried thank God! 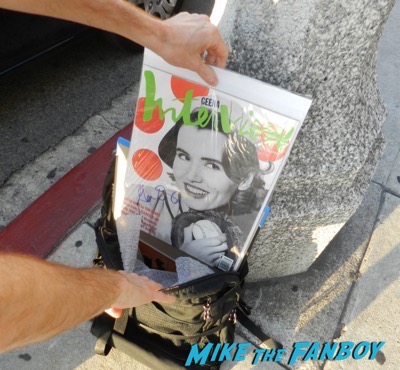 Emotionally, we regrouped, and for once I was thankful that someone took a little longer showing up so I could get the excitement out of the way.

Famke Janssen was super late, but I spotted her pulling up about 25 minutes after Geena arrived.

We walked over and I’ll be honest Famke Janssen didn’t light the world up with her smile, but she was nice enough to sign two each. She didn’t say a word, and then said, “I’m done.” 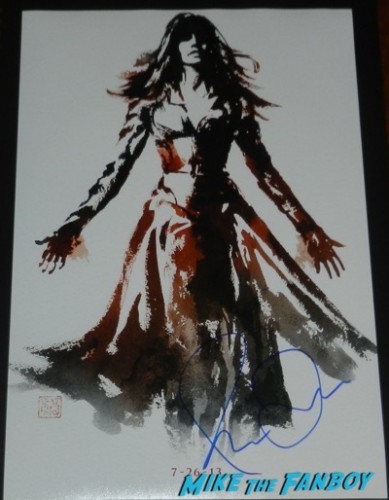 Hey, she was nice enough to sign, I’m not going to complain.

It was really an awesome day, and we were so fortunate! Woo to the hoo! 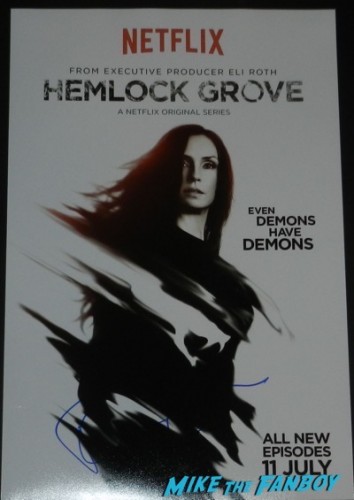