Hey Kiddies, how goes it? Big Mike here with a tribute to another Hollywood icon that we’ve recently lost. If it seems like we’ve been losing a lot it’s because we’re getting old. At least my fellow Gen X’ers are. We’re now at the part of our lives where our parents are now leaving us as well as some of our idols that we grew up listening to on the radio or watching on TV and on the big silver screen. (That’s a movie screen, kids. That’s what we would watch movies on as kids dreaming of the day when we could watch a movie on our phones while sitting in a theater while another movie is playing.)

Gene Wilder left us at the age of 83. Some knew him as Willy Wonka, others as Frederick Frankenstein, pronounced Fronkensteen! I knew him as those as well as the other half of the duo that was him and Richard Pryor. Many playgrounds in the 80s consisted of kids strutting around saying “Yeah, we bad! We bad.” Wilder was a great “straight man” in many comedies and his chemistry on-screen with Pryor is rivaled by few to this day. I was bummed to hear of him dying but know he was 83 and suffering from Alzheimer’s made me feel better he was no longer suffering. I’m grateful I got to see a lot of his movies on the big screen when I was growing up. My mom would drag my older, less attractive brother and I all over Chicago on different “L” lines and bus routes to see his comedies (and others too) on a Friday night and we enjoyed every laugh along with the rest of the audience. Good times. 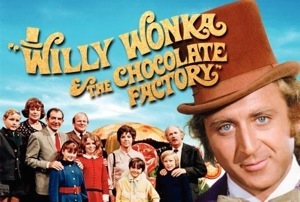 I was extremely lucky to meet him once at a book signing at the Grove in Los Angeles aboot six years ago. It was brief and strict. He was only signing the book and you had to take a picture from the line. I grabbed a selfie on my way up to the table at just the right moment, which got some laughs from the folks in line behind me. I thanked him being there that evening and he sounded just the way he did on screen “Well, thank you for being here.” I can’t remember much else because it was one of my patented star-struck moments where I’m lucky to remember anything at all. I’m so glad I took that picture. It was a great moment. 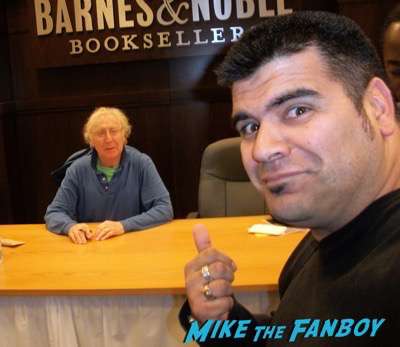 Thinking aboot him brings back those memories of traveling all over Chicago after school to meet our mom at some run-down theater and start our weekend off right with a second run movie. I kinda miss that sometimes. The three of us haven’t watched anything together in over two decades at least. Do yourself a favor, gather some friends and/or loved ones and have a nice little Gene Wilder marathon. Some of my favorites were the popular Blazing Saddles, Stir Crazy, Silver Streak, See No Evil, Hear No Evil, Start the Revolution Without Me, The Producers and my favorite, Young Frankenstein. Wow, that’s a good legacy. I didn’t even mention the Willy Wonka & the Chocolate Factory. You can’t go wrong with any of those. Watch with your loved ones, bond and enjoy. That’s what movies are for. Thanks, Gene. Say Hi to Richard for me.