As Oscar season starts heating up Entertainment Weekly is jumping into the fray with their cover this week. It features two actors who are assumed to be nominated for best actor and best actress respectively. I’m talking about George Clooney and Viola Davis. Now, I haven’t seen the Descendants yet.. I know, I know but I LOVED The Help… I saw it twice in fact… And Viola Davis is super nice. I love Alexander Payne though, so I’m sure The Descendants is going to be awesome.

This cover is also pretty hot, I have to say. I love the fact that Viola Davis is all glammed up! She looks so so so good!

In the article the two discuss the three films they costarred in, and also the impossibility of judging two totally different performances…

“I know how you do it,” Clooney says to Davis. “You have to play Margaret Thatcher and she has to play the maid.”

Check out the full cover after the jump! 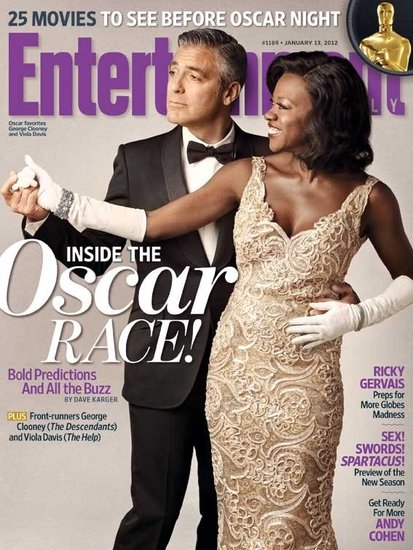