Home / Movie Reviews • Reviews / Get On Up Blu-Ray Review! Chadwick Boseman Transforms Into James Brown Before Our Very Eyes!

Director Tate Taylor, better known as the man behind The Help, knows his way around a historical biopic. The Help may not have been taken from a textbook, but it was based on a very popular novel that was turned into an even more popular film. For his follow up, Taylor choose an ever harder subject matter, the life and story of The Godfather of Soul, James Brown in Get On Up. This wouldn’t be an easy task for any director, but for a sophomore film, it’s an even greater challenge. 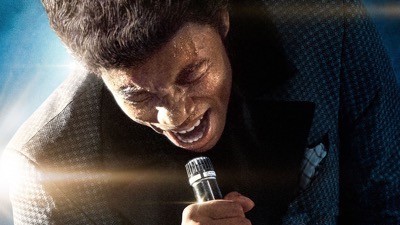 The film starts off with a bang, in the first few minutes, James Brown (Chadwick Boseman) runs into an office with a shotgun and demands to know who used his private bathroom. This leads into a police chase and James Brown being arrested. We also have Vietnam war flashbacks, Macao Parker (Craig Robinson) introduced as Brown’s saxophonist, and more insanity. It’s enough to make your head spin. 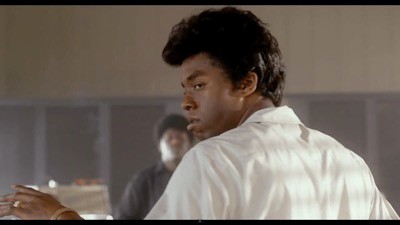 But in reality the head spinning belongs to Chadwick Boseman. Previously seen in the biopic 42, Boseman had the makings of a great actor. Here, he leaps off the screen. It’s like every move, every mannerism of James Brown was captured and put to film. It’s an electric performance, and one that has been overlooked this awards season. Boseman’s performance as James Brown could have merely been a mimic, but he digs deep to find the inner core of the singer. The attitude, the moves and even his inflections are spot on, without a false note. 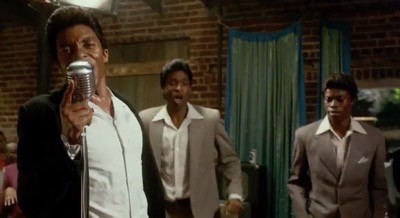 The film itself struggles at times to live up to Boseman’s performance, but it’s a well directed biopic worthy of a second look. Starting out at the end of James Brown’s life and then working back to the beginning was a great structural choice, but the film also uses flashbacks and hops around showing parts of James Browns childhood and his growing into a young adult. This technique is very effective at not only telling the story but also making the emotions poignant and helps gain new insight into James Brown’s character. 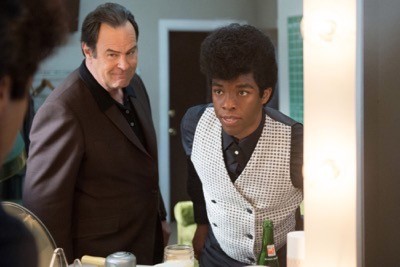 We see the abuse James Brown suffered through growing up in rural Georgia and nothing is held back. The pain that James Brown went through at the hands of his father (Lennie James) or the crushing moment when James Brown’s Mother (Viola Davis), who left the family in need, refusing to acknowledge James on the street after turning to a life of prostitution, it’s all here. Viola Davis once again delivers an amazing performance and adds such a gravity to the film. 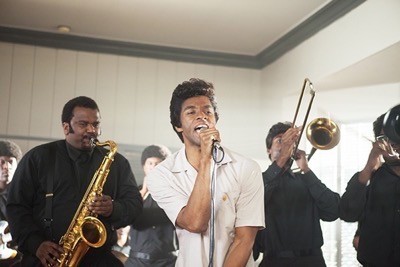 James moves in with his Aunt Honey (Octavia Spencer), working at her brothel and getting soldiers to come in for the night… Or an hour, is when James showmanship comes into full bloom and he develops his love of music. James creates his trademark hairdo and meets his partner Bobby Byrd (Nelsan Ellis). We’re taken through the first recording session, when James upstaged the Rolling Stones, performing at the Apollo theater, and while the substance abuse and tax evasion are mentioned fleetingly, for the most part they are washed over.

It’s a wild ride and I don’t think anyone will be disappointed that they took the trip. 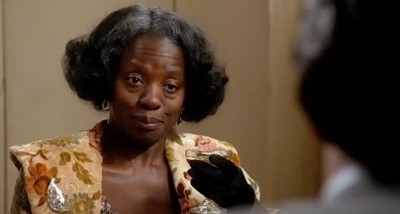 Get On Up arrives on blu-ray is a great transfer. The details are sharp and even in the flashback sequences the colors of the 60s and 70s are vivid and striking. The sound quality does right by James Brown’s music. In the musical sequences, the rhythm section is amazing and the balance is great. The Paris performance sounds especially great without being overbearing. 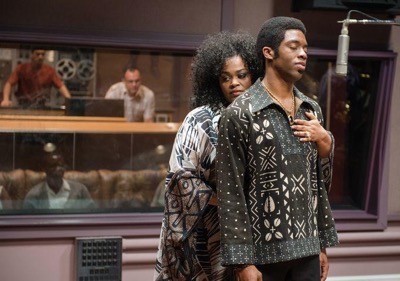 One thing that I love, is that the release of Get on Up is packed with bonus features:

There is a director commentary with director Tate Taylor that is surprisingly energetic and adds some fun facts about the production.

There are ten deleted/extended and alternate scenes as well as some extended song performances which are great.

Long Journey to the Screen – this is a short look at how long it took to get the rights to James Brown’s life story.

Chadwick Boseman: Meet Mr. James Brown – This is a really great feature about casting Chadwick and the process he went through to become James Brown.

The Get On Up Family – A look at the casting of the supporting and other characters in the film.

Tate Taylor’s Master Class – This is an interesting bonus feature. It’s an extended look at a scene from the film with the actor’s, but it’s unscripted.

On Stage with the Hardest Working Man – Using archival footage, the filmmakers compare the film with the actual performances of James Brown.

The Founding Father of Funk – The actors and producers talk about the influence of James Brown. 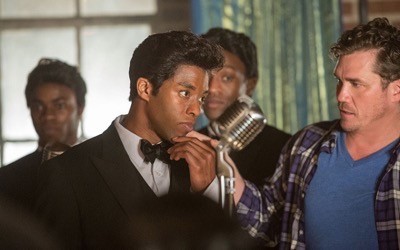 Overall, I think you’ll really fall in love with this film, whether you’re a casual fan or someone who has followed James Brown’s work. It’s packed with amazing performances, but Chadwick Boseman really brings the film to life. I was so impressed seeing his transformation on screen, it’s not an easy task bringing someone the world knows and who is larger than life and making him real. Boseman not only succeeds, he brings down the house!

Get On Up is available now on blu-ray combo pack. 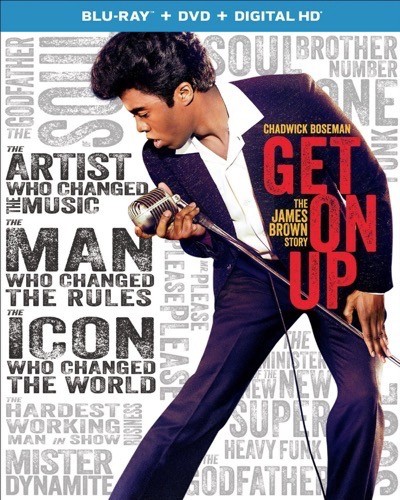