Can I tell you how nice Ginnifer Goodwin is? So nice! I’ve been a huge fan since Big Love and now of course Once Upon A Time. In fact, the whole Once Upon A Time Cast is pretty darn awesome!

Billy Beer headed out to meet Snow White.. I mean Ginnifer Goodwin and I’m pretty sure he got his happy ending…. I mean… Wait.. That’s not…

Anyway, check out his recap below!

Welcome back to Billy Beer’s Barstool. “Once upon a time” I went to an interview to see Ms. Ginnifer Goodwin. I’m not very good at fairy tales, but did you see what I did there? Very clever I know.

Anyway, today I’m off to see if Ginnifer Goodwin is actually going to be on Extra, or if they fool me again, and bring Jennifer Morrison. Last time they posted Ginnifer, and then we had to literally run to CVS to get pictures printed in time cause it was Morrison. Well, good news, after making a joke about it with security, we are assured it is Ginnifer.

She’s usually very nice so I’m not too worried today. We got a good spot, so hopefully they let her sign. The interview goes well. She told the story of how her name is now Ginnifer. I guess it WAS Jennifer, but she wanted pronounced with the Southern accent, so she legally changed it with the blessing of her mom. 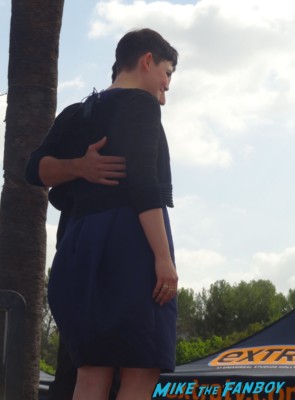 Next she talked about her short haircut. She told us she basically copied her publicist’s haircut cause she liked it so much. Finally Mario asks her is she’s dating anyone. Guess he doesn’t read any form of gossip magazines. Cause I think everyone but him knew she was dating Josh Dallas. Who later I found out he proposed to her. Way to be on top of things Mario!

Finally she walks off the stage and comes right to us. I have a picture of me and her, and an 11×14 of the funny promo shots they did for last season. 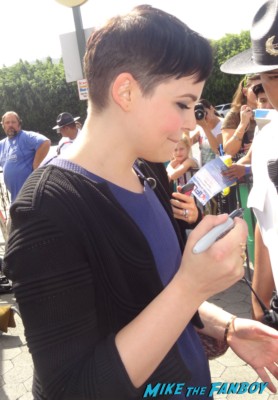 Well, even though she came straight for us, she kept skipping my image. FINALLY she does it after she does a bunch for other people.

I ask for a picture too and she does it. 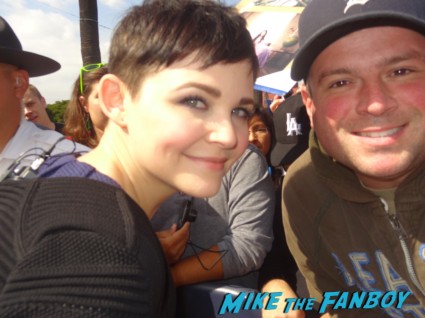 When I try to get my shot with the two of us signed, she was already walking away. I pass it down the line to see if someone could help me get it signed, but the security yelled at the person helping me. Oops! Sorry!

Once again Ginnifer show the love to her fans, and they all live happily hour ever after.