Home / Contests • Featured / Contest Time! Win A iTunes Copy Of The New Horror Thriller Wichita! The Creep-tastic Thriller Will Send A Chill Down Your Spine!

It’s All Hallows’ Eve! And to celebrate the most spookiest of holidays, we have an amazing giveaway for you!

The new thriller Wichita is out now on iTunes and let me tell you, from when I can tell it’s a Horror-ific treat! Who doesn’t love a good scary movie? Check out all the info below about the film!

SOMETHING PSYCHO THIS WAY COMES… 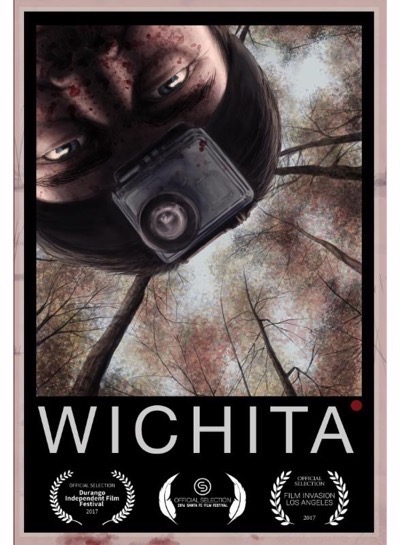 A Provocative Play on the Horror Genre, this Official Selection of the
Santa Fe Film Festival Will be Available on DVD and Digital HD Platforms
Including iTunes, Amazon and Google Play

Something psycho this way comes in the deep, suspenseful psychological thriller, WICHITA.  When Jeb (Trevor Peterson) leads a writing retreat to Aspen with a team of young writers intending to save his failing kids’ TV show, it becomes a new opportunity for his hidden cameras – and hidden rage.  This Official Selection of the 2016 Santa Fe Film Festival will be available on DVD and Digital HD on June 20, only from Candy Factory Films.
Directed by Matthew Ward and Justyn Ah Chong, and starring Peterson (Sky), Caitlin Gerard (The Social Network, Magic Mike) and Persia White (“The Vampire Diaries”), WICHITA explores the pain of a modern mass killer on a frighteningly familiar level.  As the voyeuristic director struggles to find dignity in a cruel world that has alienated him to the point of no return, this taut, provocative play on the horror genre leads to a disturbing, emotional climax.

Ummmmm can we say crazy creepy and spooky?

Thanks to our friends at Candy Factory Films, we have a few iTunes codes to giveaway so you can see Wichita for yourself!