Oh… My God… Jenny…  Look at this… Derek finally wrote an article! I know that’s what you’re all thinking, because when this hit my inbox I almost keeled over in shock. I was like… What is this? What is happening? Is there a full moon? Are dogs and cats playing together?

Check out Derek’s GLOW recap below! 🙂

If you’re going to be telling a story about athletes set in the neon-soaked 1980’s well then Muscle Beach in Venice is about as accurate of a spot in LA there is. On June 29th Netflix put on a fan event to coincide with the Season 2 release of their female wrestling show “GLOW.” Being a huge fan of the first season the fan in me had to brave traffic on the way down and the high-in-the-sky bright sun to come check this event out. The ad for the event said “Cast Appearances” so I didn’t really have a clue who would actually be there except for actress Britt Baron (Justine) who had posted it on her iG story. 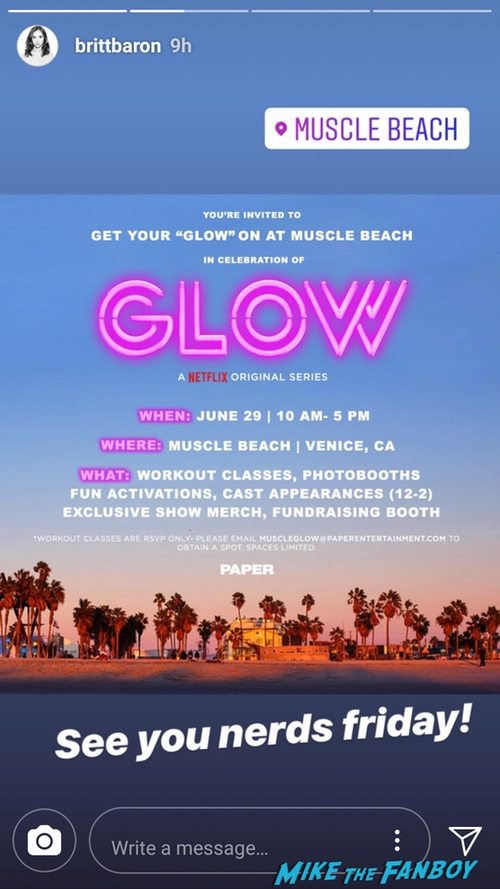 But being that her character is one of my favorites and I still needed several of the cast on my Season 1 poster it seemed worth giving this a shot. Okay, and I have a mad crush on Britt so admittedly that might also be part of it.

The event was held in a large lot that was sandwiched between the basketball courts and a large stage with stadium style seating benches which I’m assuming is used for boxing or something of the sort. 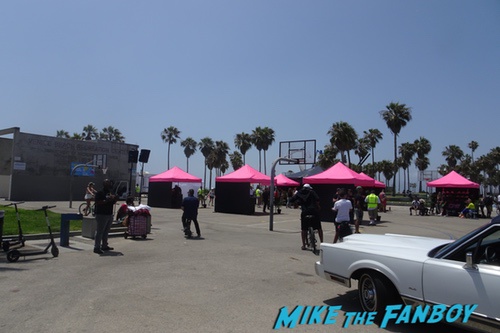 There was press line area with a huge backdrop decorated in the bright pink GLOW logo that the cast was conducting interviews at and next to that was the iconic white limousine parked which one of the characters drives in the show. 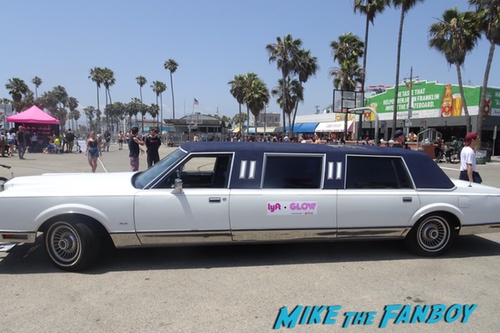 If you made your way past all this Netflix had set up several little tents also in the signature pink color which had various attractions. They had a photobooth, a face painting station, a fundraising booth benefitting the ACLU, merchandise from the show for sale and even a couple of complimentary giveaways (a GLOW towel and some trading cards). This Fanboy never says no to free swag! 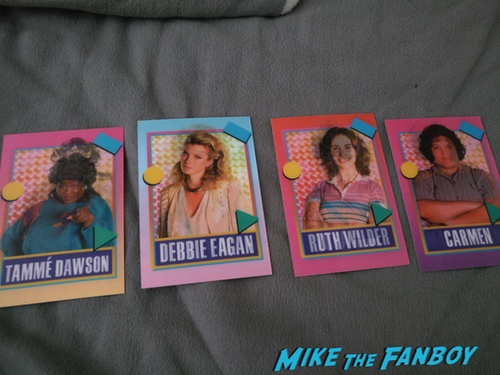 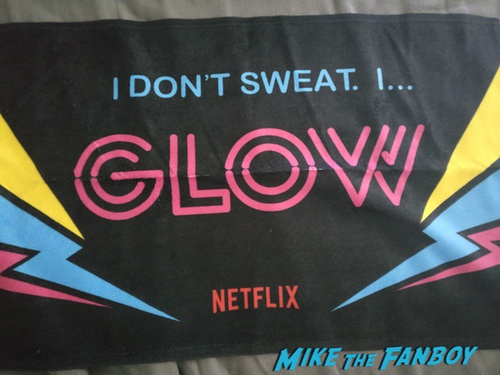 After I made a quick once around of the place I headed back to the Press line to see if the ladies were done and thankfully most of them were. 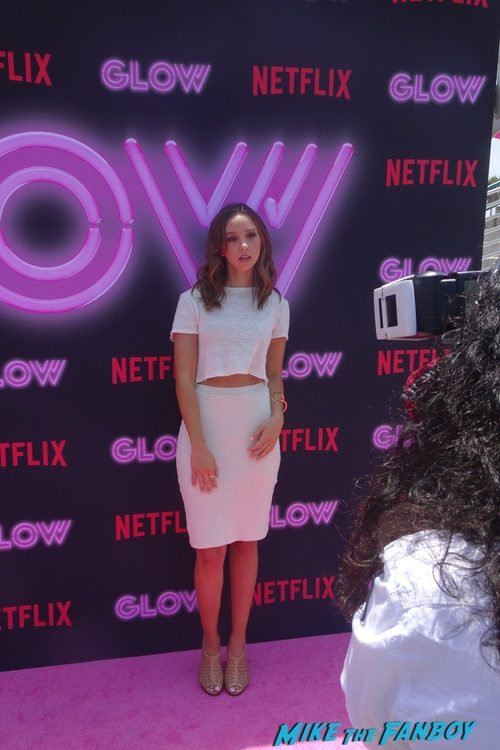 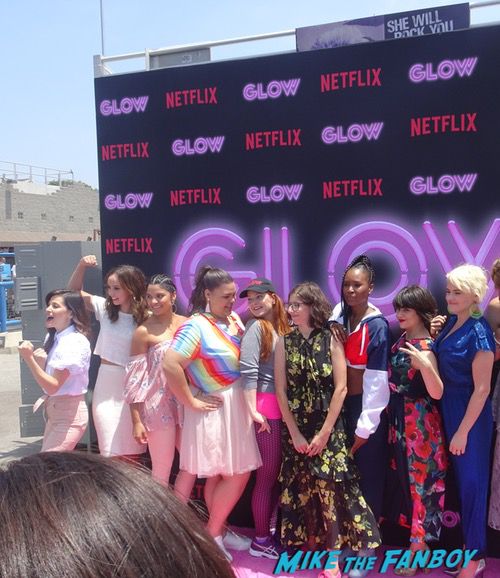 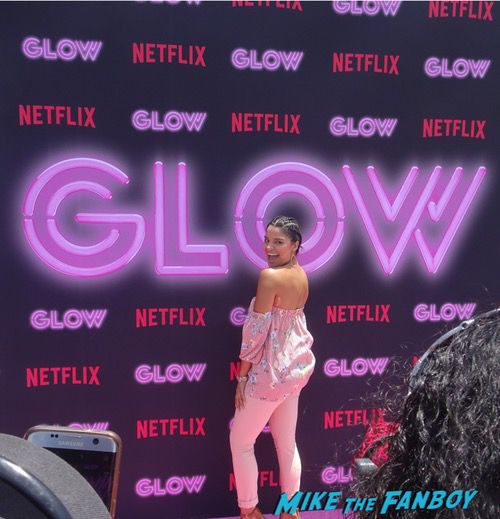 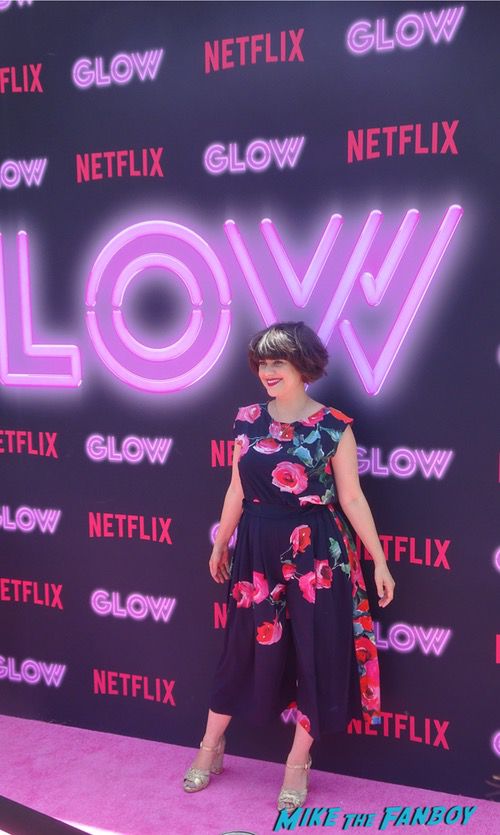 The only weird thing about this event is being that it was in such a large space the women had all gone their separate ways and were very spread out. But one by one I casually approached them and told each how much I enjoyed the first season and was excited to see what was in store for season 2. I got actresses Britney Young (Machu Picchu), Sydelle Noel (Cherry Bang), and Kia Stevens (The Welfare Queen) added to my Season 1 poster and then I also had them sign the one I made for Season 2. I spotted Britt Baron as she was talking to a couple of people and I have a huge problem with interrupting when they are having conversations so I cooled my jets for a minute.  Thankfully I didn’t have to wait long because a young girl approached and asked Britt for a picture so she was very happy to take one with her. Using this as my moment I introduced myself and told her how much I liked her character on the show and she was very happy to hear that. As I was about to ask her for a picture Sydelle happen to come over and I took the opportunity to take the picture with both of them in it. I asked Britt if she could sign my poster but before she could actually do it one of the Netflix staff pulled her away to take some group photos. She said she would get me right after so I just played (very) amateur photographer of the shoot while she did her thing.

This actually worked in my favor because now all the ladies were back together in one spot so as soon as they were done with the photographers they were all hanging out in the same spot for a few minutes. I started walking towards Britt and when she saw me she actually stopped talking to the person she was speaking with and came up to me. “I said I was going to sign for you,” she said. I got her on my S1 and S2, and an EW group shot to which she replied “Oh awesome!” probably because she was in full wrestling makeup. I apologized and said I just had two more solo ones of her and she said, “You’re fine. Don’t worry about it.” She really liked the solo pictures I had that were from a magazine shoot she had done and afterward I thanked her so much for being so patient with my ridiculous self. 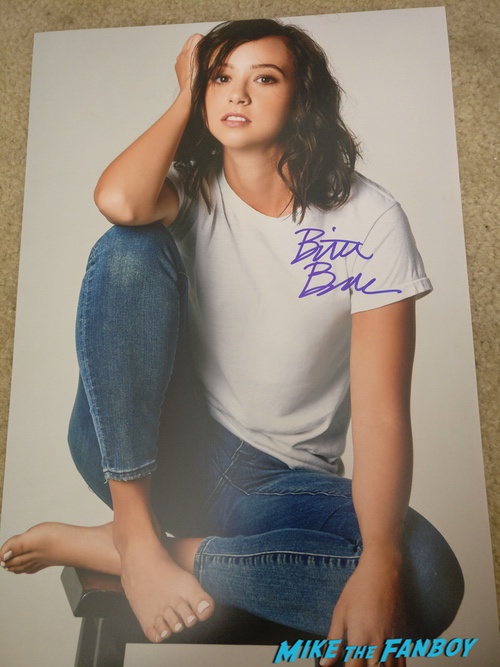 I was nearing the end and just needed a few more even though the sun was starting to wear me down a bit at this point. I proceeded to get the newest member of the show Shakira Barrera (Yolanda) who was very wonderful as I had to apologize I didn’t know her character yet. I then got Marianna Palka (Vicky the Viking) who introduced me to her friend which turns out read with Marianna on the audition tape that led to her getting the role on the show.  But before I could finish things up the Netflix folks pulled the cast for some more photos, this time in front of the limousine. Well crap, here we go again. 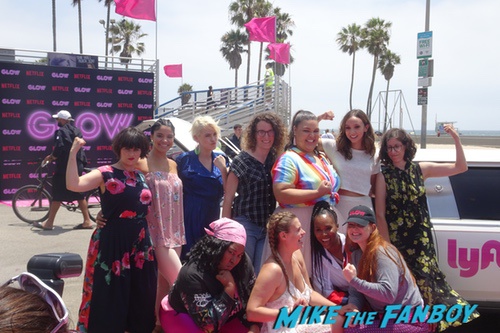 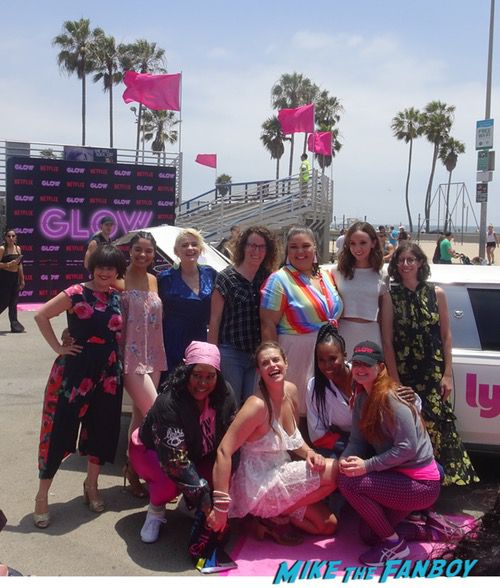 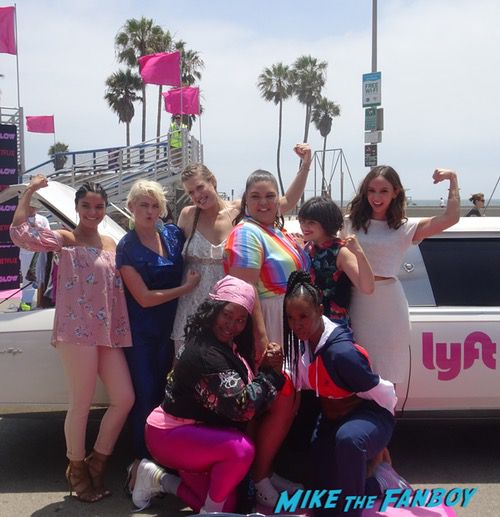 I shot off a couple of more pictures as well since it seemed like a missed opportunity otherwise. Fast- Forward to them being done and letting the girls go and I went up to Kimmy Gatewood (Ethel Rosenblatt) and Rebekka Johnson (Edna Rosenblatt) who play the two old Biddy wrestlers. It’s so funny because they even stay joined at the hip in real life just like their characters. I even went ahead and got the creator Carly Mensch to sign my poster because she was right in front of me and I have big respect for writers. Last but almost certainly not least I went up to the fiery Jackie Tohn (Melrose) who I had actually met before but needed her for my S2 and the group shot. I told her how I saved “the best for last” and she very much agreed with me. What a “Melrose” thing to say.

ALL the women were very friendly and appreciative of my love for the show and I couldn’t have hoped for the day to go any better. Even though it took me about an hour in traffic on the 405 to get back it was very worth it. I only wish Netflix would do more events like this for the fans because I would definitely go to more of them.  Now to dive into Season 2 and enjoy the show itself! 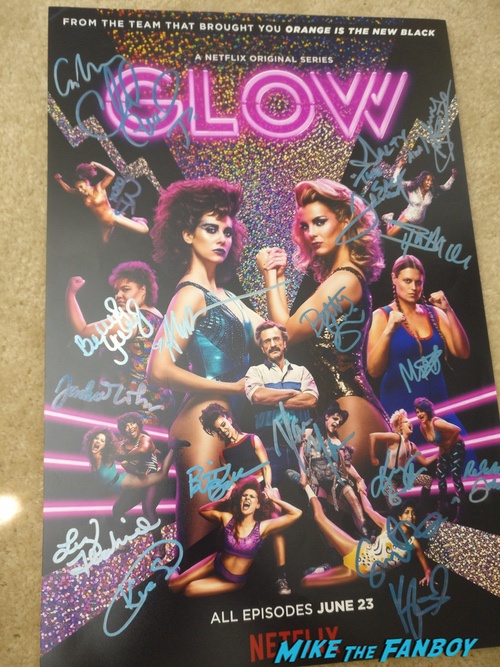 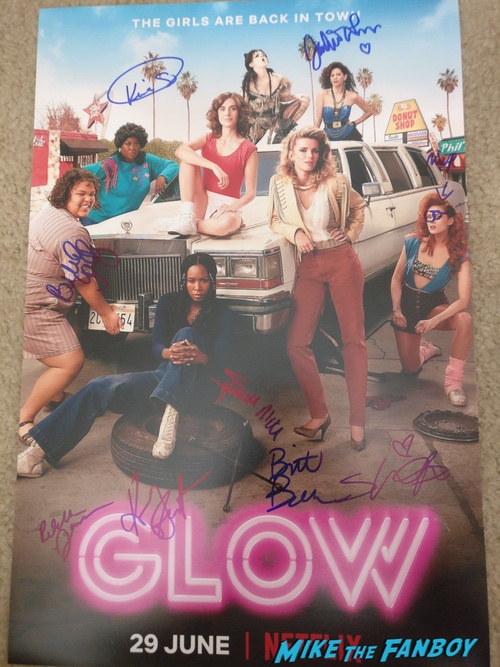 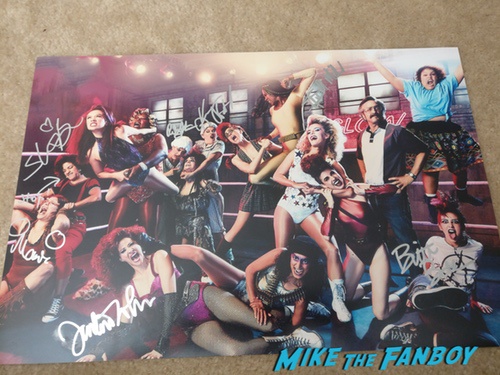