Such drama with… Gordon Ramsay? Hmmm… That wasn’t a sentence I expected to type in my hungover state. Yet, here I am.

The Kitchen Nightmares star has always been a cool guy, and I’m glad to see he’s still a chill cat. Paul did a recap of meeting him and singer Bridgit Mendler. Apparently, there was a little drama and it led to pushing? People… It’s Gordon Ramsay! Breathe and relax!

so i arrived at the alley of doom expecting all these tv obsessive middle aged house wives getting ready to swoon for iconic celebrity chef Gordon Ramsay but no less than 5 people where there!

The only people there were the usual power pap twins al and Mary and a high school couple where were super fans of lemonade mouth star BRIDGIT MENDLER.

Slowly the usual gang of paps showed up to get their arrival shots and perfect timing because world famous star of stage and screen DON BARRIS arrived and greeted me with a wonderful autograph on my photo of him with the delightful miss piggy and we chatted about tom green’s mom and THE DING DONG SHOW. Unfortunately the mtf crew couldn’t make it to such an amazingly happening event!

Anyways first arrival was the lovely Bridgit Mendler who I might say “hello my name is” is not a bad album and she is charming who of course waved when the now 10 of us called for her.

Anyway, whatever there was 10 people in line no big deal.

Ok so the line is set up and people are continuing with the lack of personal space
and out comes Gordon Ramsay who heads right over and starts signing and is like a machine but takes his time and makes sure everyone gets something. I had him sign my gordon behind bars and muppets promo pictures and tell him about my friend who brags about making perfect scrambled eggs and even made a song about it (negativland -perfect scrambled eggs) in 1987. 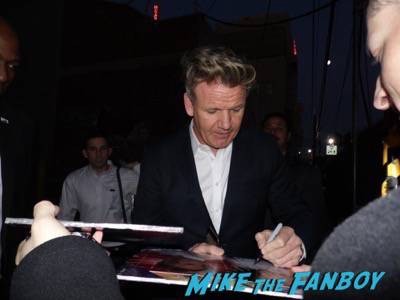 Next was Bridgit who came right over. Sadly the super fans walked around the barricade and almost ruined it for all of us and grapher who is better than everyone decided to follow and walk around the barricade as well when security tried to reason with him he argued “I know I know” and ignored them. 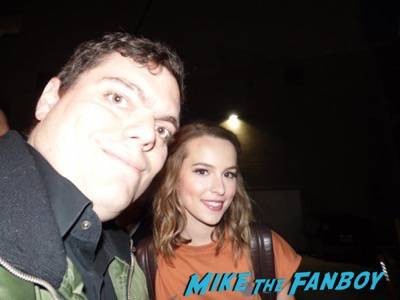 Bridgit was super nice and signed both my photos even though afterwards her publicist said “only one each” which is kinda funny since again there were 10 people there.

Everything kinda went smoothly Pasadena Mike whined that she only initialed and I threatened to call her back to have her do a full signature just for him. All about Pasadena Mike , at least no silver sharpies were involved this time