The new Netflix film The Gray Man is heading to SDCC and is making a splash at the convention in a big way!

There’s booth takeovers, giveaways and an awesome offsite to check out!

‘The Gray Man Training Program’ is a high-energy, interactive escape experience set on a tram car, inspired by the epic chase scene in the new Netflix Film The Gray Man. Once aboard the tram, fans will have to prove they have what it takes to become the next Gray Man in a test of skill, strength, and speed while transporting a top secret file to safety before the mercenaries catch up and the time runs out. The heart pounding mission will include various obstacles and special effects, and will culminate in a rooftop sprint as fans race against the clock to complete the mission. Fans will leave with a badass customized social takeaway that puts them at the center of their own action film. 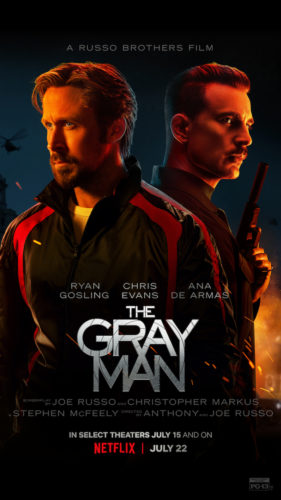 **You must have a ComicCon credential to access the Convention Floor. No RSVP Needed**

Timed to the Netflix release of the Joe & Anthony Russo directed film, the Netflix booth at San Diego Comic Con will be taken over by The Gray Man on Friday, July 22. Come by the booth for fun giveaways and exclusive merchandise. To note, Netflix will also be highlighting some of our upcoming content, as well as some fan favorites across series, film and games for the duration of San Diego Comic Con . Fans will get to immerse themselves into the world of their favorite Netflix shows and films.