Gosh, I was fortunate enough to meet Slash back in the day. Velvet Revolver just released their second album and i was able to meet the entire band. They were all really nice and Slash, in particular was really awesome!

Now, CB headed out the other day to meet Slash and was also impressed with how nice he was. Take a look at his encounter with the Guns N’ Roses legend after the jump!

Deh-shay, bah-sah-rah, Deh-shay bah-sah-rah! YOU IN THE JUNGLE, YOU GOING TO DIIIIIIIIIIIIE! Today, i went after the myth, the man, the legend, the hat,  the one and only SLASH!  Guns N Roses is one of my favorite bands. I still remember the first time hearing Welcome to the Jungle and my mind blowing. The song was performed with pure energy.  I couldn’t get the song out of my head because it was amazing! Then you hear Paradise City, Sweet Child O’Mine, You Can Be Mine, November Rain and everything they did was great.  The same thing happened when I first heard Slither from Velvet Revolver.

Slash, one of few musicians I always say, “LOOK ITS SLASH” when he performs with someone. He’s a legend to me, and I’ll say it proudly. Unfortunately, I have never seen him, and have always wanted to meet him. When i saw he was going to be performing a concert, I was there. I didn’t care what was taking place that day, nothing else mattered but Slash! I had my GUNS CD and a photo of just him. I set off in the hopes to meet Slash!

I arrive in time to catch Slash arrive, but he waves and goes inside. I was hoping to get him early, but that wont be the case since know I have to wait till after sound check or after the concert.  Sound check comes around and he waves and goes inside. This is not good, now the only possibility of him signing is after the concert. So we hear the concert, and out of no where i hear Slither being played. I was already happy with the day.  After the concert, nothing as he goes straight into the studio. So now I’ve waited four hours, and its WINOLD, but I’m determined, I know he’ll do it!

(Editor’s Note: For the love of Jesus, stop with the WINOLD! M-)

Around 9:45, we see him leave and we yell and plead with him, and he comes right over. 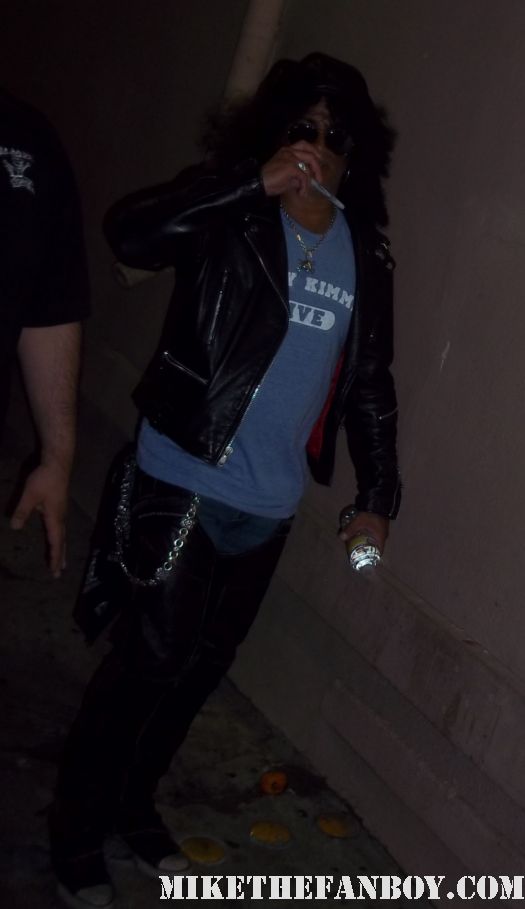 He’s super nice and says he will start at one end of the barricade and work his way down, INCLUDING the fence! 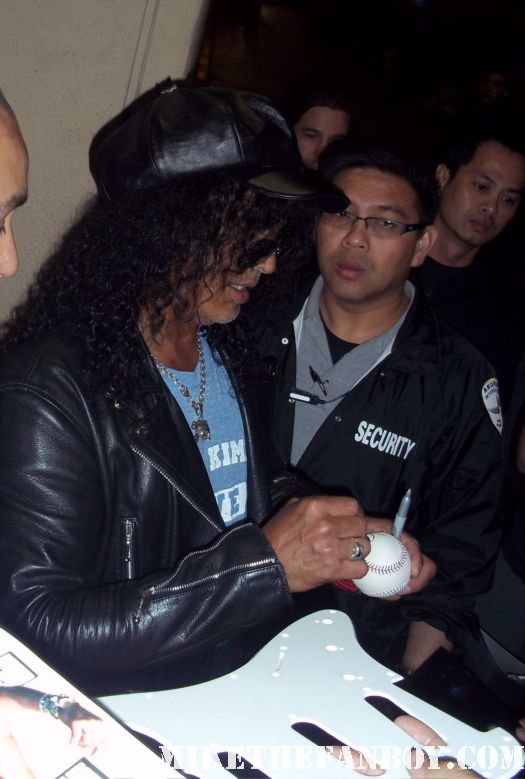 True to his word, he signs for everyone! Its super quiet, but he moves very slow as to get as many people as he can. 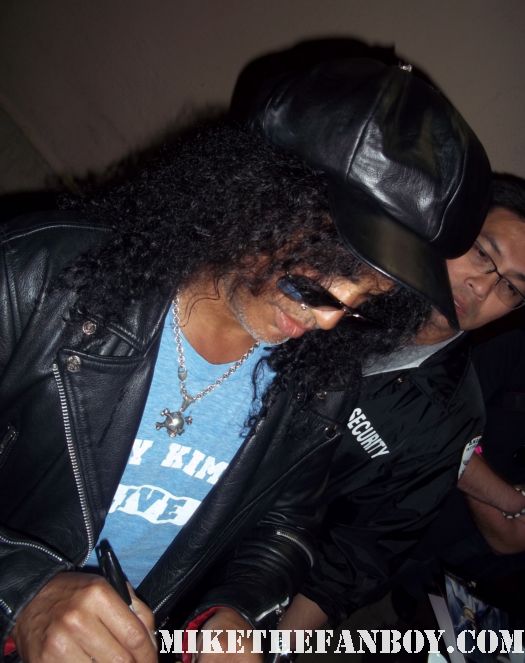 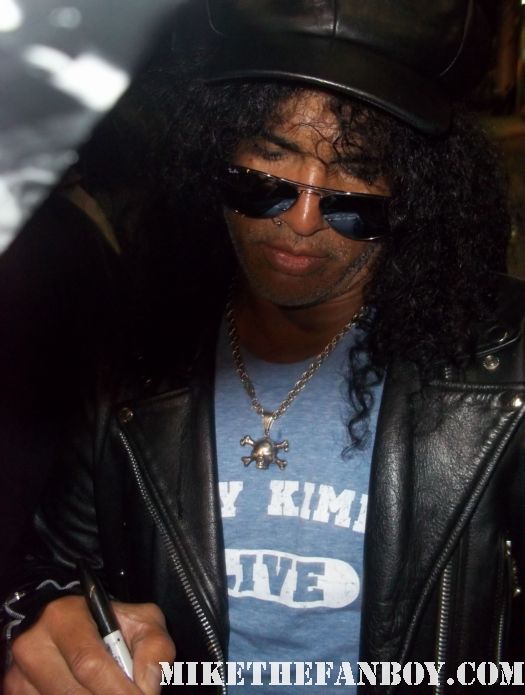 Even as it starts to drizzle, he continues to sign. He gets to the end and leaves and we all thank him. 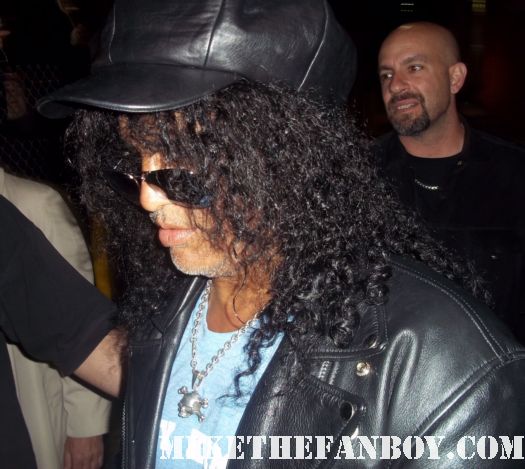 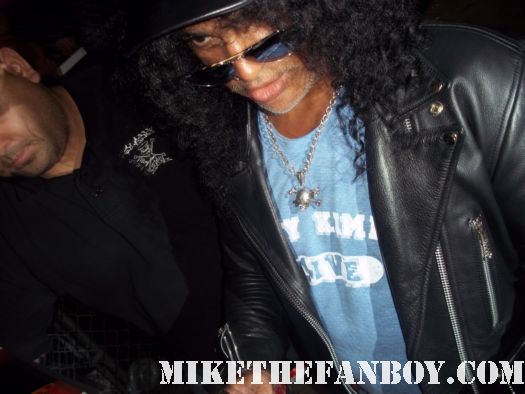 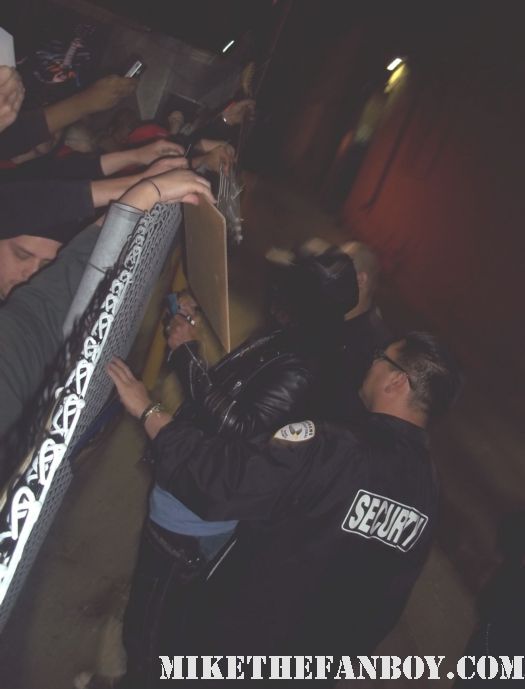 I have never had such a pleasant experience with someone I admire and respected. Slash is a class act and Hall of Fame worthy. When Mike The Fanboy is ashes, you have my permission to die. Until next time, same CB hour, same CB channel same CB website! KAAAAPPPPPOOOOWWW! 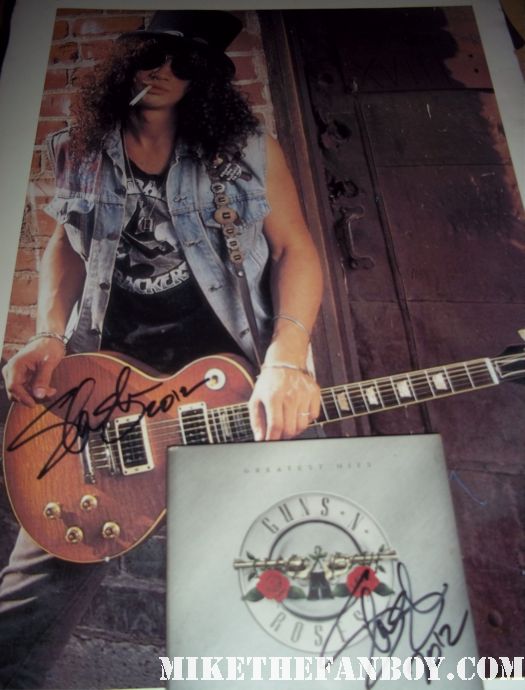