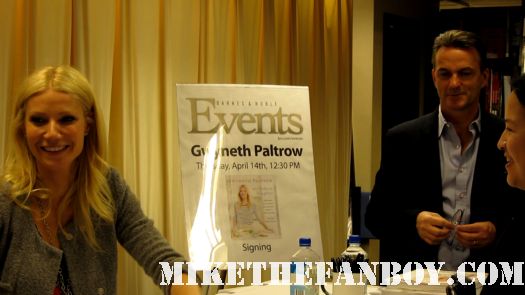 The lovely Erica! She is out and about on the streets of New York City and paused to write up a fun report on none other than Ms. Gwyneth Paltrow! Erica attended her book signing after meeting her for a brief few minutes the day before. Ah, vacation, it’s all I ever wanted! Vacation, happy to get away! Sorry, I needed to have a Go-Go’s moment there!

Anyway, take it away Erica!

How do I spend my precious vacation days? Sleeping in and enjoying the sites of New York City? Nope. I spend my first day getting up early and braving 40 MPH wind gusts in the hope that there will be a break in the storm when Gwyneth Paltrow heads to a TV appearance. Yep, that’s what I do!

It’s raining and windy and kind of sucks so I hope that Gwyneth will take pity on us and roll down the windows as she drives into her TV appearance. I’ve had these German lobby cards for Shakespeare in Love forever and she’s the last person I need!

My sister and I are the only one to brave the elements on this cold and windy morning. About a half hour after we arrive, a French professional autograph hound shows up to wait as well, but it’s generally pretty quiet (except for the wind). Most of the professionals are probably stalking her at some other events she’s doing to promote her new cookbook.

About an hour after we arrive, her car pulls up and thankfully the rain has let up and the wind is pretty calm!. She’s on the opposite side from where my sister and I are standing, but the French guy is over there and she actually gets out! She signs, personalizes and take a pic with the guy before she comes around towards us (looking stunning). She signs Linda’s Iron Man poster in silver and then asks if I want my lobby card in another color pen since she notices that Joseph Fiennes already signed in black. I can’t believe she asked! Yes! 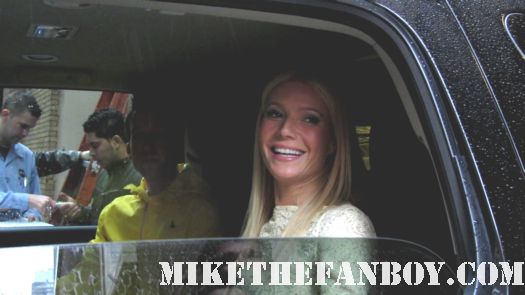 Unfortunately my black pen died and no one can whip out another pen soon enough since her people are yanking her in. Gwyneth actually protests that my pen died and is reluctant to leave me hanging. I ask her to do it on the way out and she agrees. Wow! So nice!!

We sit and wait and suddenly 4 professionals who got her at her previous appearance that morning show up. She signed there so they want to get her again. This is not good for us as there is a paparazzi here with a large camera and that tends to scare off celebrities. Drat! If only my pen hadn’t died, we would be out of here!

After a while, her car backs into the driveway so it looks like she’s finishing up and her team wants to make a quick getaway. This means trouble!

They are closing the garage door so Gwyneth will get into her car unseen. As they lower the door down, I can see Gwyneth coming out and I call out to her. I’m leaning over, trying to keep eye contact as the door closes. She sees me and smiles and gives me a cheery wave and a bright “hi!” As the door slams shut, I manage to call out a pathetic “you promised!”

Hopefully she’ll sign from the car as it pulls out!

The garage door re-opens and she’s in the car already. However, one of her team gets out and says that my sister and I can approach since she promised us.

Unfortunately, the TV studio won’t let us into the garage to have that quiet moment with Gwyneth without the professionals and paps. Drat!

Instead, her car pulls out and slows down as she rolls down her window to sign for me! She smiles at me and signs my lobby card and then does a few signatures for the pros. She’s clearly annoyed with them as she makes a face while she does some quick ones for them and then sort of tosses the pen back down to state she’s done signing. I’m so glad I got her and that she was so nice! 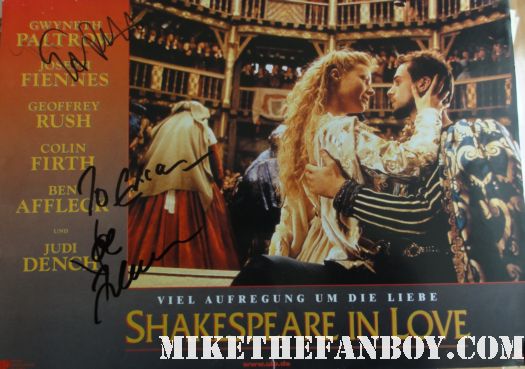 With all the rain, I didn’t get any pictures, but that’s okay since I will meet her one more time at her cookbook signing the next day. Yes, I get up early for the second day in a row to go find Gwyneth!

We know they are wrist banding this event so we get there pretty early to make sure we’re in. We get there nearly an hour before the wristbands go out so we can secure our place in line. Yeah! 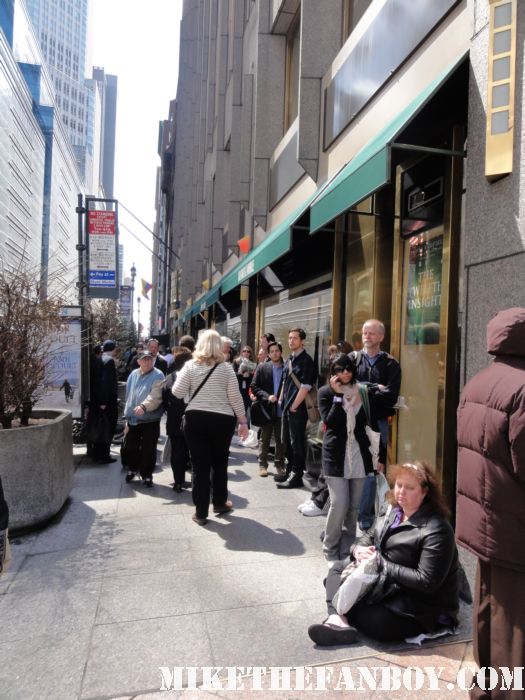 After waiting about 4 hours (sigh!) outside, they start to lead us into the store to wait for her arrival. Being rather short, we can’t see what’s happening over the tall bookshelves (Mike, where are you when I need you?!), but we manage to take a few photos by stretching. 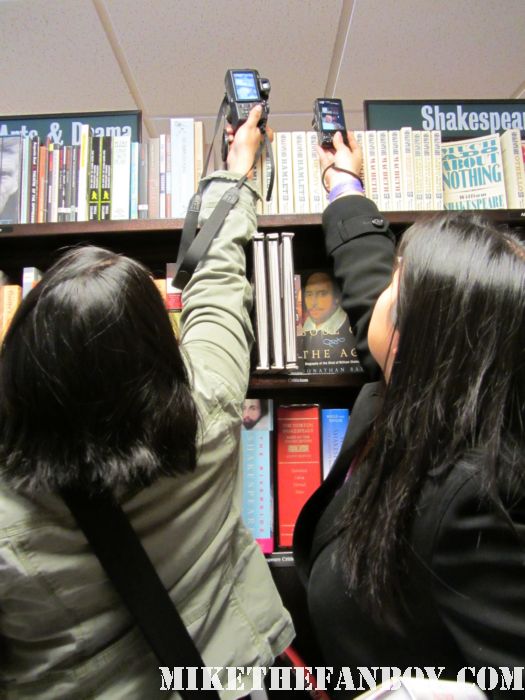 The press area is absolutely crammed and it’s a huge flood of yells once Gwyneth arrives. She poses for pictures for a while and then does a few interviews as well. 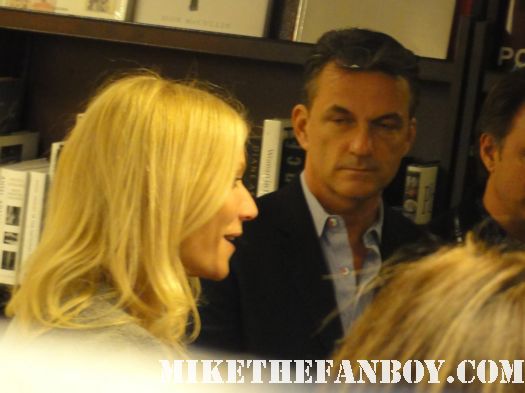 Finally she finishes with the press and begins signing. 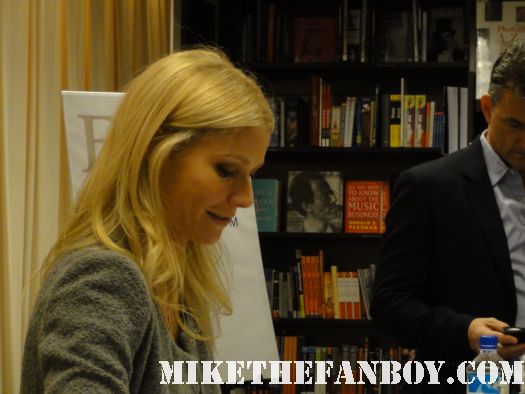 Thankfully we are up front so we should get a decent signature (the first 10 people in line have at least 4 books each to get signed!). 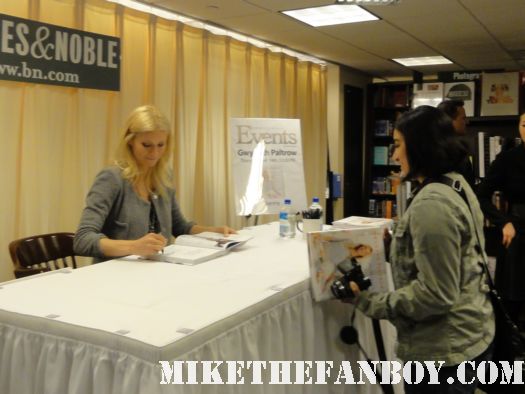 There are no posed photos, no items besides the cookbooks to be signed and she will not personalize as they really are trying to get through everyone as fast as possible. 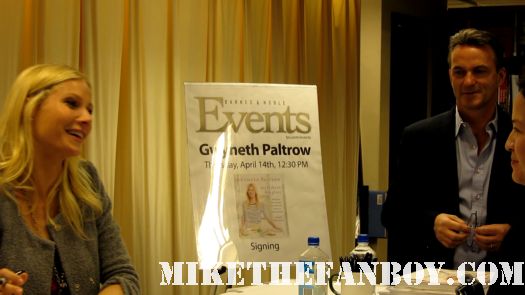 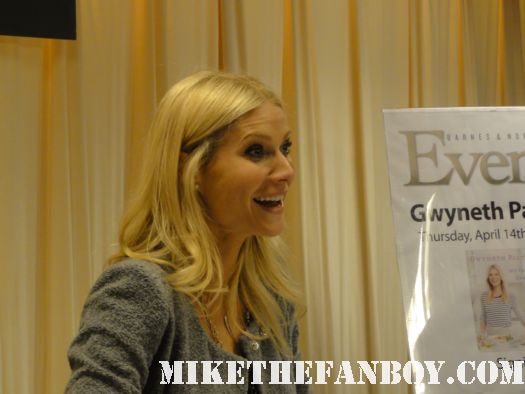 However, she is bright and cheery and chats with each person so we do get a little moment with her. Yeah! 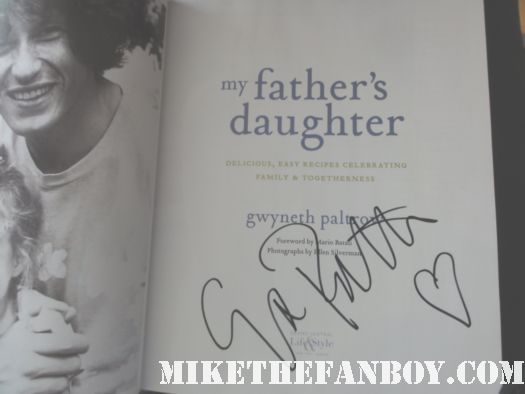