Hercules and the Captive Women 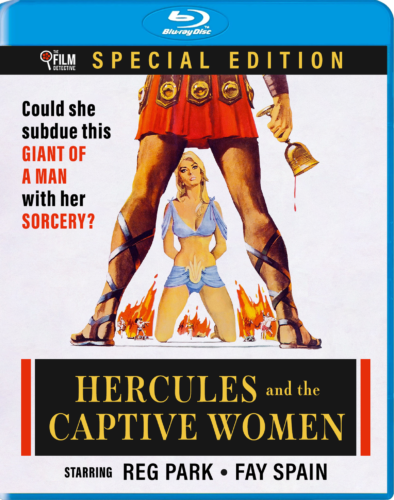 The Film Detective (TFD), a classic media streaming network and film archive that restores and distributes classic films for today’s cord-cutters, wholly owned by Cinedigm (NASDAQ: CIDM), announces the collector’s release of Hercules and the Captive Women (1963), coming to Blu-ray and DVD April 13.

The latest special-edition release from vintage film champion TFD, this epic sword-and-sandal adventure stars Reg Park and Fay Spain, with direction from Vittorio Cottafavi. Originally released in 1961 as Ercole alla conquista di Atlantide in Italy, Hercules and the Captive Women is the version edited for the U.S., released for audiences in 1963.

Action-packed from the beginning, Hercules (Park) first encounters Ismene (Altan) when he must save her from a shape-shifting creature. Victorious, Ismene brings Hercules home to Atlantis where they come face to face with Ismene’s mother, the evil Queen Antinea (Spain), prepared for battle to end her pursuit of world conquest.

The release was produced from rare 35mm archival elements beautifully restored from a 4K transfer in its original aspect ratio and features a showing of exclusive commentary and special features just as strong—if not stronger— than Hercules himself!

EXCLUSIVE SPECIAL FEATURES:  Includes the full Mystery Science Theater 3000 (MST3K) version of the film, released in 1992. Additional special features are an introduction by MST3K writer and co-star Frank Conniff; audio commentary by film critic and screenwriter Tim Lucas; Hercules and The Conquest of Cinema: A Swords and Sandals, documentary from Daniel Griffith at Ballyhoo Motion Pictures; and The Duel of the Titan, a 12-page, full-color booklet insert with an essay from author and historian C. Courtney Joyner.

Hercules and the Captive Women will be available for purchase April 13 on Blu-ray ($24.95) and DVD ($19.95). To learn more about this special-edition release or to pre-order, visit https://www.thefilmdetective.com/hercules

About The Film Detective:

The Film Detective is a leading distributor of restored classic programming, including feature films, television, foreign imports, and documentaries and is a division of Cinedigm (NASDAQ: CIDM). Launched in 2014, The Film Detective has distributed its extensive library of 3,000+ hours of film on DVD and Blu-ray and through leading broadcast and streaming platforms such as Turner Classic Movies, NBC, EPIX, Pluto TV, Amazon, MeTV, PBS, and more. With a strong focus on increasing the digital reach of its content, The Film Detective has released its classic movie app on web, Android, iOS, Roku, Amazon Fire TV, and Apple TV. The Film Detective is also available live with a 24/7 linear channel available on Sling TV, STIRR, Plex, and DistroTV. For more information, visit www.thefilmdetective.com