Melissa headed down to the Heroes and Villains Fan Fest in Chicago and had a great time. It’s a newer series of cons but they had a great lineup of guests including several members of team Arrow, The Flash, Legends of Tomorrow and more.

She did a wonderful recap as usual. God bless Melissa! She Rawks!

After arriving and getting the lay of the land we decided to check out the first panel of the day. We were surprised when we realized the panel area was basically in the middle of the floor. Seating was limited and the acoustics were awful, making anything the panelists were saying hard to hear, so we decided do some shopping before we hit up the guests. While we were heading back towards the vendors we noticed Ciara Renee’s table had no line. I enjoy her character on Legends of Tomorrow so we opted to split a table photo op (most guests were offering selfies/table photos). Ciara was very sweet and seemed genuinely excited when we walked up to say hi and take a photo. 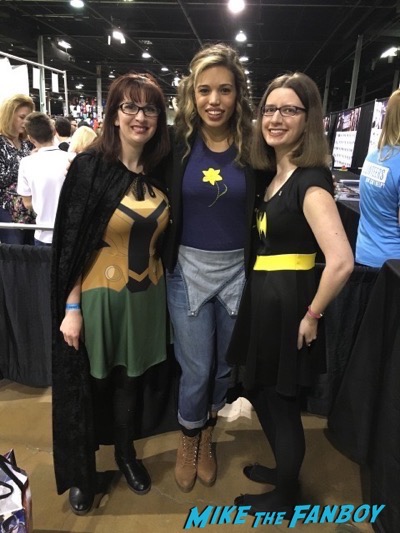 Around 12:30 we headed over to my #1 priority of the day…Colin Donnell. I really liked Colin on Arrow, but I am loving him on Chicago Med. I was about ten or so people back in line so the wait wasn’t too long. I do collect autographs, but in the interest of saving some money I decided to just go with a photo op. Colin could not have been nicer. I introduced myself (and he introduced himself) and we shook hands before posing for a few photos. I told him how much I enjoy his work and can’t wait until Chicago Med comes back from its little hiatus. He thanked me for the support and for coming out to the show. 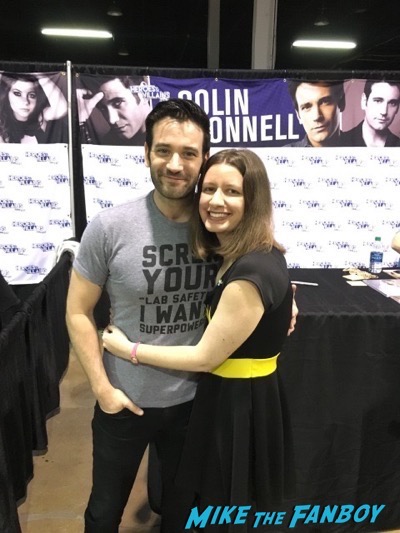 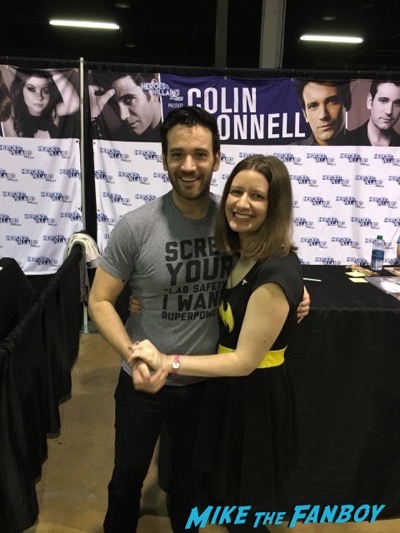 Next up was Willa Holland. I’m not the hugest Thea fan, but I liked her on Gossip Girl. Her line was really long so we settled in and people watched while we waited. When it was our turn I was a little disappointed she was only leaning over the table, but she was very nice and we exchanged a few words before the photo. I still can’t get over how tiny she is. 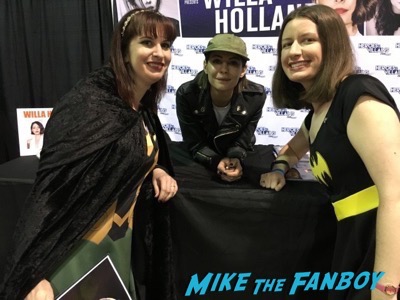 I wasn’t planning on getting Robbie Amell, but after walking past his table a few times I decided to go for it. He was sick so instead of a handshake I got a fist bump. We chatted a little bit and then got a quick picture. I thanked him for coming despite his cold and he laughed. 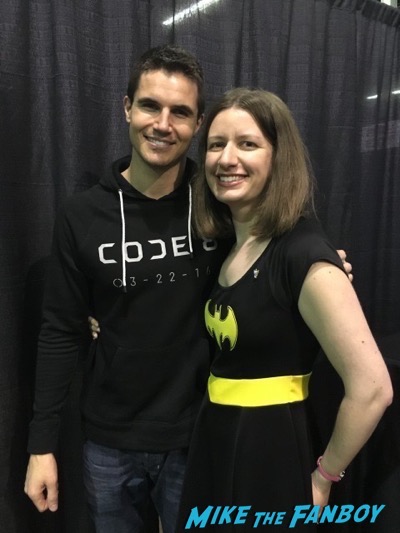 Right next to Robbie’s booth was Brian Tee. Brian is on Chicago Med and will be playing Shredder in the upcoming Teenage Mutant Ninja Turtle movie. He was just sitting there talking to his handler so I went up to say hi and get a photo. Brian was over the top nice. We took a few photos and then chatted about Chicago and such. Very very sweet man. 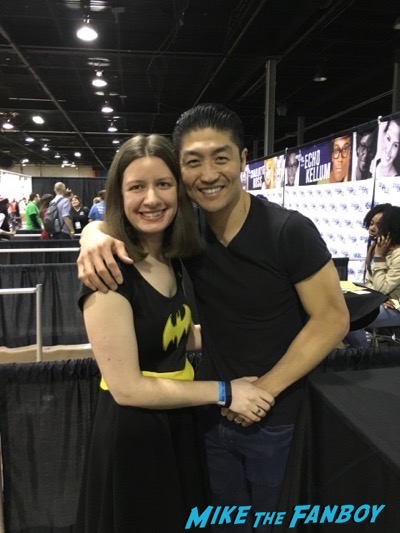 After hemming and hawing Brandy decided she wanted to meet Robin Lord Taylor. His line wasn’t too bad so we jumped in. Robin could not have been nicer. He greeted us warmly with handshakes and asked how our day was going and where we were from (his sister lives locally). I told him how much I enjoyed him in a movie called Would You Rather and he seemed really excited to talk about the movie. We did a group photo op and then we each got one of our own. Before we left he hugged us good bye. It was so neat to see someone so excited about being there and meeting fans. Very nice guy. 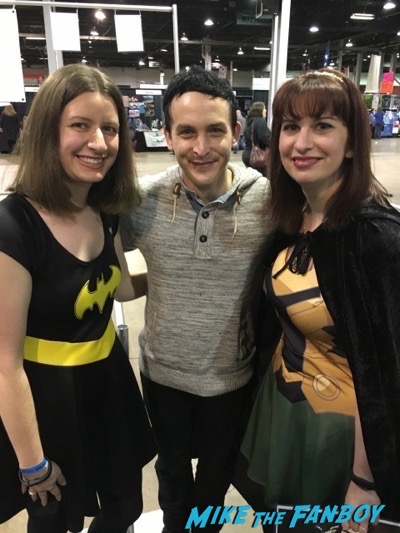 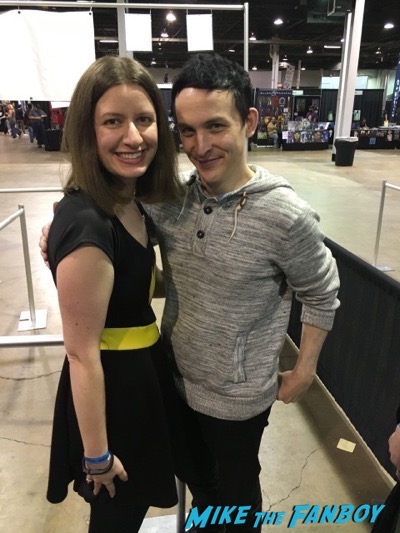 While wandering through the vendor area we met an author/artist named Donovan Scherer. We chatted about his work and Brandy ended up buying a copy of his book Monsters Around the Campfire, which he autographed it for her. 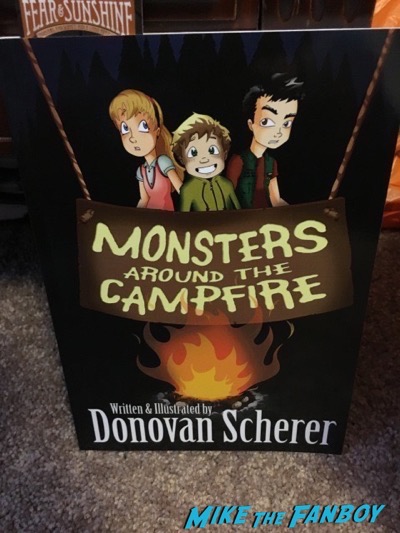 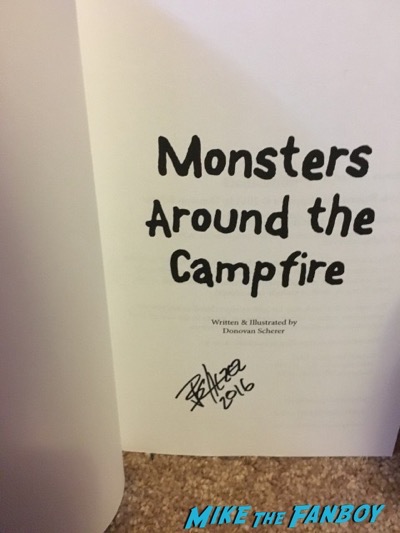 Our last stop was going to be Caity Lotz, but her line was crazy crowded and it had been a long day so we decided to skip her.

I would highly recommend attending a Heroes and Villains Fan Fest. The set up is great, the guests are top shelf, the prices are reasonable, and the staff could not have been friendlier. I’m looking forward to attending Walker Stalker Con in the spring.