Dallas is a huge fan of political figures, he’s lucky that so many of them visit South Carolina during the primary season.

He’s met pretty much everyone and he did a great recap of meeting President Bill Clinton and former Secretary of State Hillary Rodham Clinton.

Dallas from South Carolina here, and although I said in my last post that we very rarely get celebrities here…that exception is every four years from November-February when the politicians descend upon my state 😛 They are here so often that you’re sick of them and it’s the only thing you see on TV. It’s political campaign ads, local news covering there press appearances, and you can just run into them at a restaurant because everywhere is a chance to campaign in one of the first key primary states like SC.

I successfully completed my mission of meeting every Republican running for the 2016 primary (more on that another day) and attempted to meet both of the Democrats but never found an opportunity to run into Bernie. Today’s article is about my encounter with like my favorite person on the planet (sorry, don’t hate on me), the former First Lady of the United States, the former Senator from New York, and the former Secretary of State, Hillary Rodham Clinton! 🙂 (you really can’t deny that list of accomplishments is impressive)

I’m so excited on this day because I’ve been waiting for like 9 years for this opportunity…Hillary was one of the few people I didn’t get to meet for the 2008 primary campaign, they spent a ton of time here in late 07, I met President Clinton back then, but Hillary never came to my city and back then I wasn’t traveling alot for collecting yet. I got wind the day before the event that Hillary was finally doing a rally in Myrtle Beach, I didn’t have alot of time to prepare, but I printed a photo of her, couldn’t find anywhere with a hardcover copy of her book, so I brought a paperback copy of one that I found, and my hardcover of Hard Choices that I had bought at Barnes and Noble on Black Friday already signed with just her first name, hoping I might get something better than that 🙂

Event is scheduled for 5pm, I get there at about 2pm, and there’s about 40 people in front of me, I was kinda surprised since it was so last minute.

I have two friends with me, and we made friends with the supporters around us that came, and killed time, then finally go through the security check and they let us in.

Hillary had had a really busy day criss-crossing South Carolina, we were to be her 3rd or 4th stop of the day, and apparently she was running late from the previous event, it was 5:30 and still nothing yet.

Finally at about 5:50 someone walked out and said that the Secretary was stuck in traffic but on her way, and she finally gets there about ten-15 min later.

The crowd is really excited, I was freaking out, as there’s alot of political events I go to just to say I went, but I actually admire her alot, and I was in the second row, I was right near her, she gives a very strong speech for about 40 minutes, 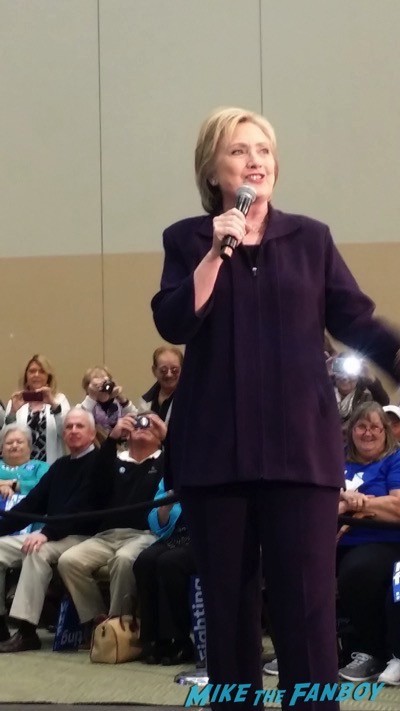 I was surprised that she wasn’t cutting anything since she was already so late and had one more event scheduled for 730 in another town, but she spent alot of time with us, and after her speech was done I was afraid she was going to bolt and leave…but no, she came right over to the far end of the barricade and started shaking hands and taking selfies. 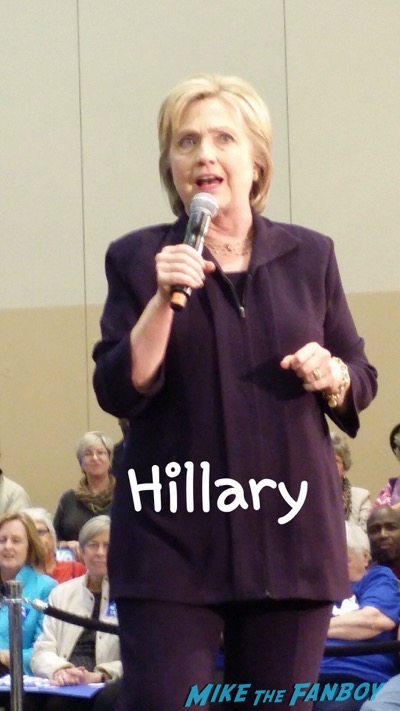 Unfortunately, I had a great second row seat, and when I sat down thought I had prime location to jump up quickly and get to the barricade but the crowd grew so large people ended up standing there during her speech and I was stuck.

The people infront of us were really nice and let us stick our heads through. As Hillary was reaching out her hand I said Mrs. Clinton can my friends and I please get a group picture with you, and she said absolutely let’s do it, she turned to her handler, who took my camera, they asked the front row if they could scoot over a bit, we leaned in, and she posed for a really great picture that looks like I’m photobombing someone else’s selfie…but I promise, she’s posing for me!! (I just cut my friends out of the picture that were to my left lol) 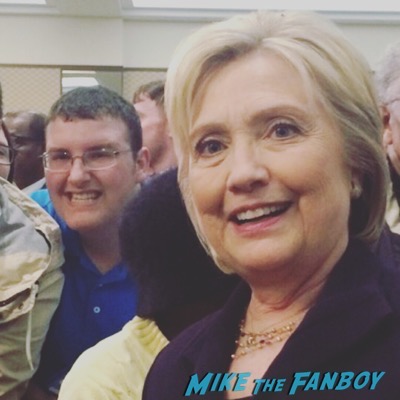 We thank her so much and she continues to walk, I have my stack of stuff in my hand, I notice she’s not signing anything, but I’ve met President Clinton several times, I know he doesn’t sign anything at the barricade, his Secret Service collects things and take them backstage, it gets autographed and brought back and returned to you, so I hope she’s doing that…I start waving my Hard Choices all around and shout Mrs. Clinton, can you sign your book, and I get her attention I think, even though she’s still walking an agent comes up and says I’ll take the book…and I’m like, well, I have a couple books, and a photo do you think she’d do all 3? And he says sure….at that point, Im hyperventilating not even gonna lie….lol….I was expecting to only get one, and they take all my stuff and I see them go to the back with it….

Hillary spends atleast 15 minutes shaking hands/doing selfies, I was really impressed, it was around 720 and she had an event atleast 25 minutes away by plane scheduled in 10 minutes, but she wasn’t short-changing us at all.

They don’t take alot of items back though, I noticed, just a couple people got lucky, I was surprised.

After she’s done, the crowd disperses and I go wait by the door.

After about ten minutes a guy from the venue walks out with the things she had signed, he says I have alot for a Dallas, which of you is it, and I was so happy at that point lol.

I opened them up, and I got full “Hillary Rodham Clint” signatures on all 3 items….truly amazed….they had taken out my sticky notes asking for them to be personalized and put “signature only” stickies on the book and photo, and she was supposed to personalize the copy of Hard Choices apparently, but I know she was in a hurry.

All 3 items looked really good, and I walked away an even bigger fan. 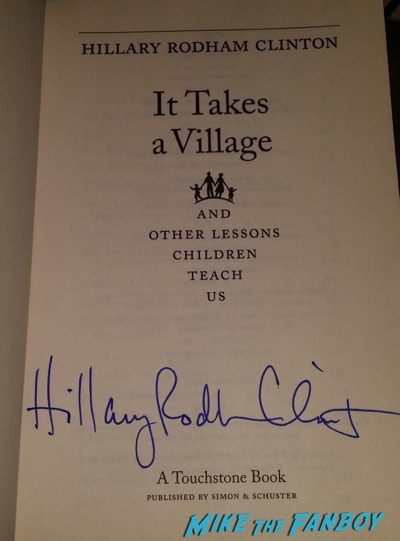 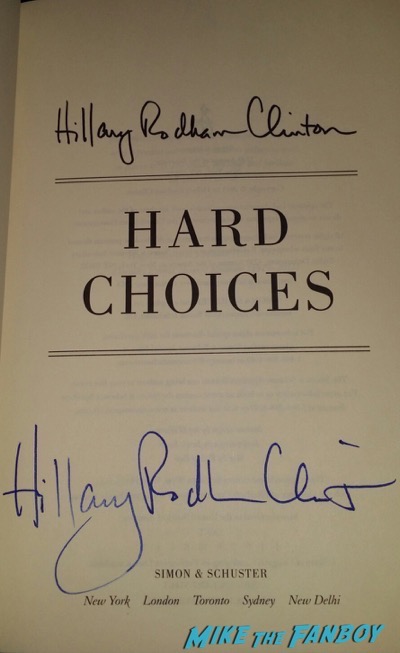 I’m not going to do a separate report for this one, but I met President Clinton for the 3rd time a week after that, he came to North Carolina to campaign on behalf of Hillary and I really felt it was worth the 3 hour drive, I wanted him to dual sign my photo of him and Hillary, and I had a couple of his books with me too. His staff is usually nice too, but unfortunately that day his staff were all jerks and said one item only, 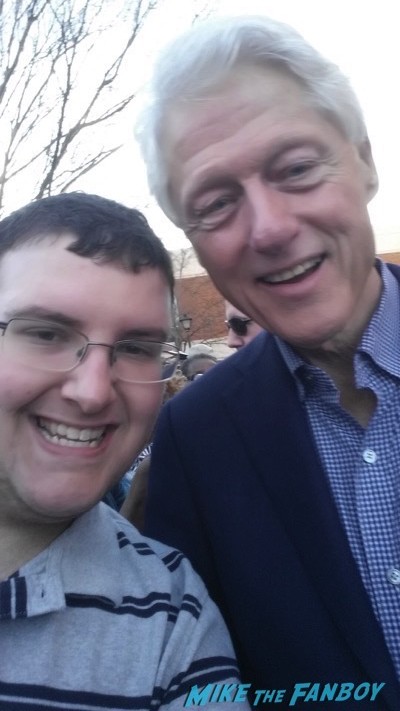 if you give us all 3 I’m bringing them back with nothing signed….so I just sent in my photo, and got a great signature from him…and got a really cool selfie with Bill that day. He was in a great mood, like always. Bill is one of my favorite politicians I’ve met! 🙂

So there’s my recap of the Clintons….I have lots more to share soon! 🙂 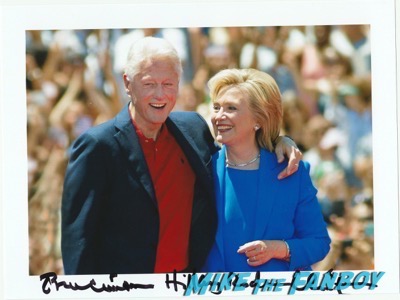