God bless Billy Beer! You know if it wasn’t for a certain French Bulldog I would have check out the Hit and Run premiere myself. You see, I totally love Ms. Kristen Bell, but since she has been with Dax Shepard, let’s just say Ms. Kristen Bell has fallen a tad out of my good graces.

Perhaps I need to rewatch Veronica Mars again to refall in love.

Anyway, Billy Beer didn’t have an adorable French Bulldog to watch so he headed down to the premiere. Check out his full report after the jump!

Ughhhhh! My head is KILLING me! What happened last night? Where’s C.B.!!! He’s nowhere to be found! K-Mart is going to open in a few hours, and I need to get him there so he can get the new Batman Toys. Need to go back to the bar to see if I can find any clues. When I get there, I ask the bartender what happened. He told me that someone had ordered me a beer and after drinking it, I was acting delusional! I asked him what beer it was, and he pulls out a 6 pack of: BILLY BEER! Well of course! This beer is at least 30 years old! 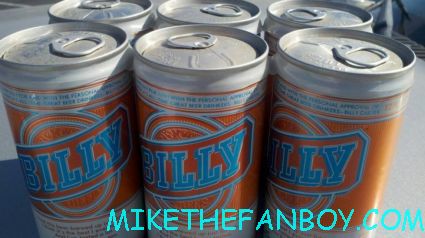 I check my pockets for any more clues. I find a ticket stub for the movie Hit and Run. Off to the Theater to find C.B., let the adventures begin!

Now I wasn’t planning on going to this event due to the fact it was scheduled the same day as the Expendable 2 Premiere. I found out last minute that the Premiere had been rescheduled, so after a quick stop, I got some pictures together and went on my way. It’s not the biggest and brightest cast, but it does have a few highlights that I’m hoping on getting. I’ve heard she’s been hard, but I’m a fan of Kristen Bell in Forgetting Sarah Marshall, and being a BIG Alias fan, I was hoping to get Bradley Cooper too. Everyone else I figured I could just put on a cast piece.

I get there early, but nothing crazy. The only person there is C.B. We get a nice spot in the front

Now normally this is where I would enter a MONTAGE, but I’m happy to report that my enjoyment of tasty beverages finally paid off in my fanboying. I decided to go have a nice cold one on this hot day at the ESPN zone. When I got there the whole place was closed except the side bar. I go in there get my beverage, and start talking to the bartender. He tells me there’s an after party for something.

“Is it for that Movie Premiere Hit & Run?”

SCORE! Found out where the after party was 🙂 MONTAGE! Time for the arrivals. 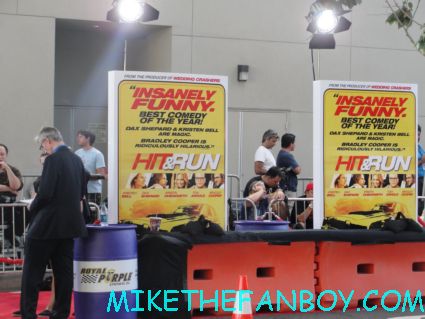 The first one to arrive is David Koechner. Not a “superstar”, but man has he been in a lot of things I really like. I can’t wait for Anchorman 2! He’s super nice and comes down the row signing and taking pictures. 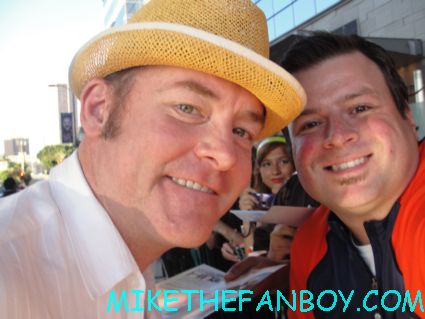 Next arrival, Oh Crap! It’s Dax and Kristen in a dune buggy.

A little early for the main stars but time to cross my fingers. I’ve heard when they are together, they usually don’t sign. I wore my Detroit Tigers jacket in hopes they’ll show some hometown love. (they are both from Michigan) They do some cheesy kiss, and then Dax is hugging everyone there. Not looking good, cause we’ve been now yelling for them for a while

Finally you see them making the turn towards the crowd. Are we being Punked? Nope, here they come! They start off to the right of us. Shoot! Dax is just standing there. We yell for him to come our way and he actually does. I get him on my poster. Kristen is starting to make her way over to us. I notice she’s taking pictures with a few people, so hopefully I can get one of those too. As she comes to me, I totally forget to mention the Michigan question, and just ask for a photo. I’m in a section with a lot of graphers, so it took a couple of seconds to get the pictures off my head, but it ended up turning out great. 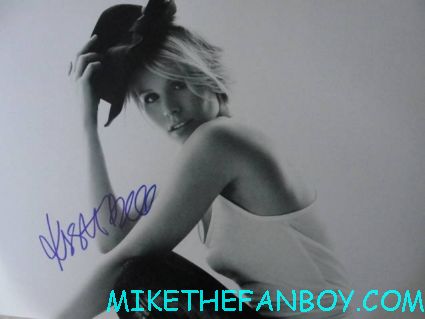 She signs my picture, and was off to C.B. I tried to get a second one done, but she had already made her way down. I’d rather get one and a picture then 2 autos. 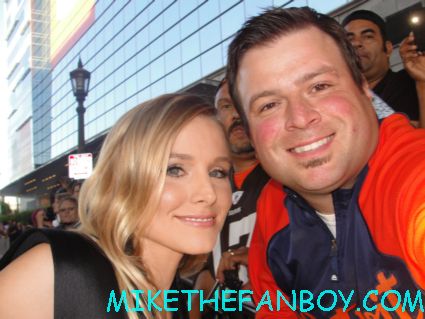 Next arrival, Ryan Hansen. Didn’t really research this movie much, so I didn’t even know if he was in the movie. People are getting there cast photos signed so I follow. 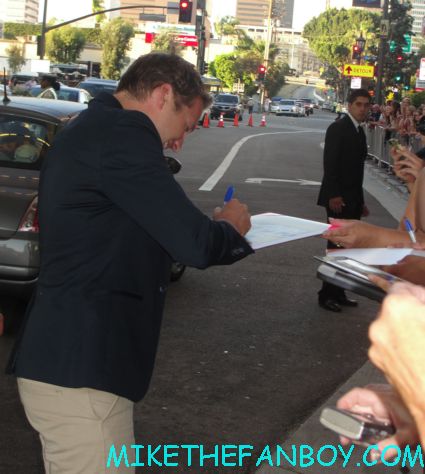 Joy Bryant is quick to follow. Everyone keeps coming over, this is great! She signs my cast photo too. Next to me, they had some sexy pictures of Joy. She was like “Where did you get those OMG” It surprises me when Celebs say this. You took the pictures, did you take them for no one to see???? LOL 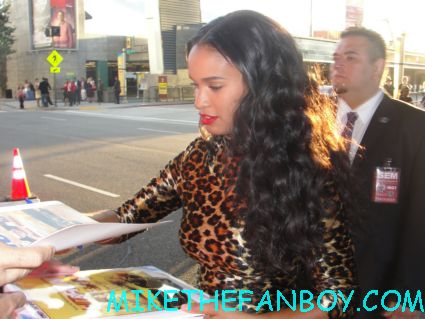 Now the time I’ve been waiting for, Mr. People’s Sexiest Man Alive, and Alias Star Bradley Cooper! (he was in some hungover movie thing too I think) Well, he follows suit and comes right over and signs. 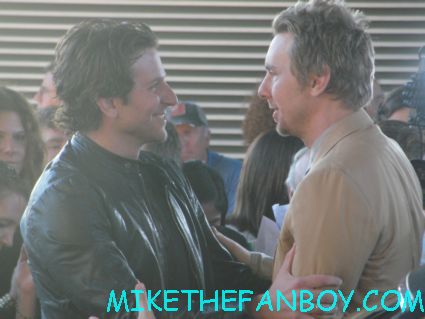 He goes down most of the line and signs 2 things for me. I ask him for a picture, and luckily told him I had my camera ready. He stops and gives the camera a smile, click, got it! Now we won’t say what the picture looks like. Let’s just say there might be a fanboy fail in the future. This premiere is going great! 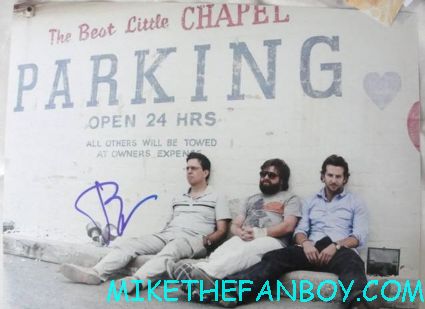 Tom Arnold is the last cast member to show up. He too runs across the street and signs for his fans. I’m running out of room on this poster. 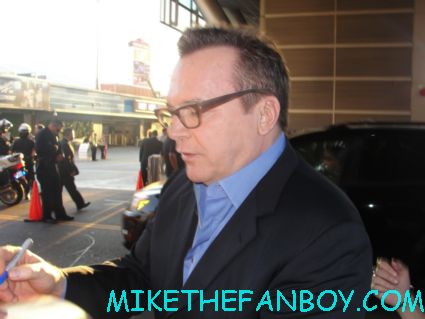 Arrivals have ended, and now C.B. and I on our way to find the cast of Bones. Doing a little double dipping. Well after 20-30 minutes of driving around for no reason, we finally give up and go back to the Premiere. When we get back we see a bunch of people still standing around. I guess Walmart had some big thing and had a lot of celebs attending. The word is we already missed Garth Brooks, and he signed a bunch.

Next out was Pauley Perrette. She has got to be one of the nicest celebs in the world. She signs and takes pictures with everyone. Some people even got 2 pictures with her (cough cough). Again, it just wasn’t my picture day. 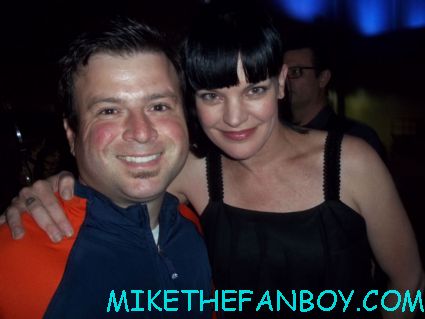 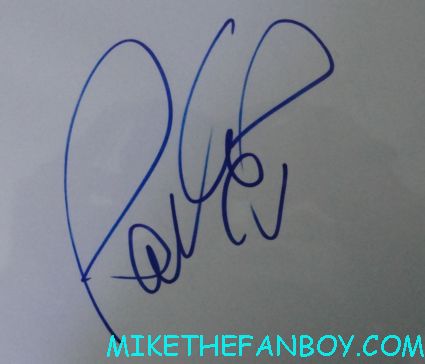 Next person out was Miranda Cosgrove. She came over and signed, but she wouldn’t sign blanks. I didn’t expect to see her, so I had nothing for her. Oh Well. The last person left inside was Josh Groban. I didn’t really expect him to sign, but when he did finally come out, he signed a ton. I ended up getting 2. This was just an added bonus. 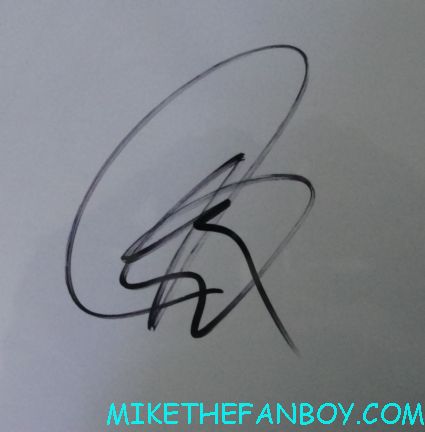 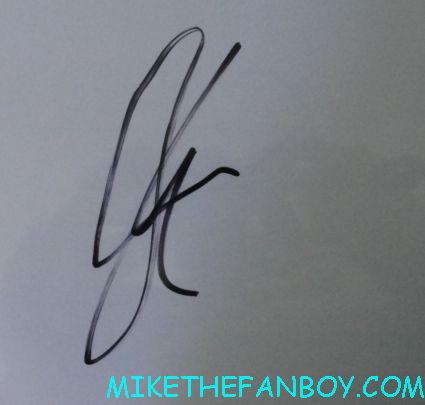 Now time for the after party. I usually will leave after arrivals if I get everyone I was looking for, but since I knew where it was, and also knew that Erika Christensen was there. I wanted to wait it out.
I ended up getting a nice place on the rail. Jason Bateman is the first to arrive. They’re dropping them off so they have to walk right past us to get in. Jason is nice enough to sign 1 each per person. 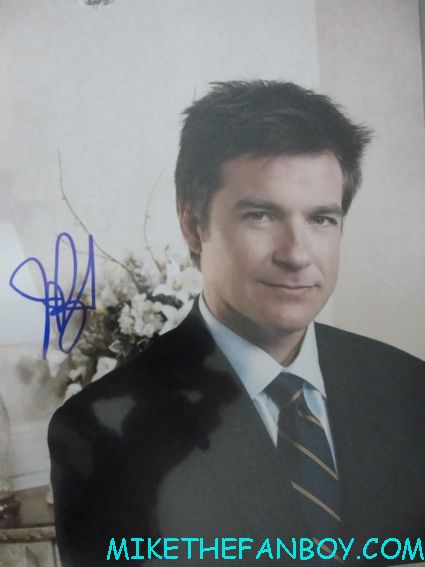 Next up is Robert Loggia. What a nice guy! I told him I still watch Necessary Roughness every time it’s on TV. He got a good laugh, and thanked us. 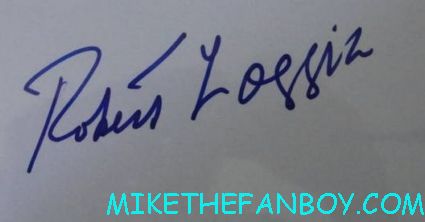 Tom Arnold passed by next. I didn’t get a picture with him the first time, so I decided to go for one this time. I really didn’t have anything left for him to sign. 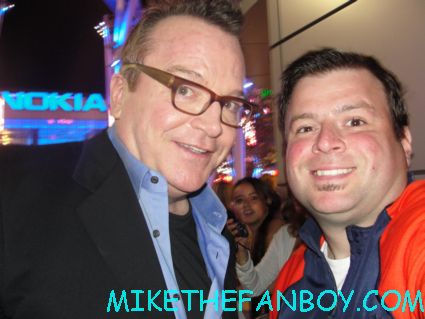 Someone we missed on the carpet was Michael Rosenbaum. I followed Smallville cause Tom Welling went to High School with me, so I thought this would be cool to meet him. He comes over too and signed my picture and poster I had for him. I asked for a picture and got one, but let’s just say add that one to the list. 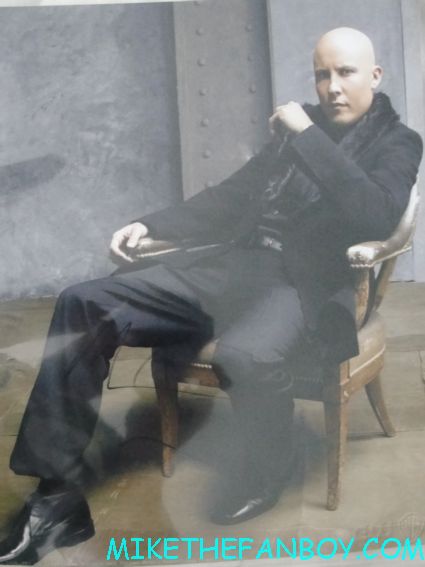 Bradley comes over again, and I got my last item signed by him. He rushes in. 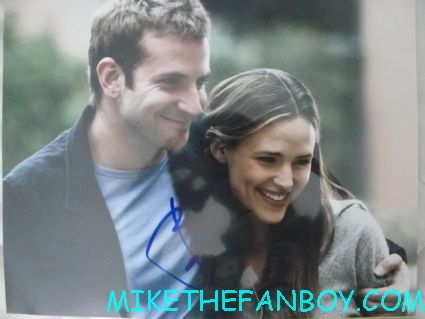 Still no Erika 🙁 Next up to bat was Tyler Clary. I wasn’t sure who he was until someone asked him about his Michael Phelps comments. OH YEAH! He’s the swimmer that said he works harder than Michael. Well he still won himself a gold medal. Someone asked where it was, and he’s like “in my pocket”. So he pulls it out for us and takes some pictures. COOL! I’ve never seen a gold medal before. 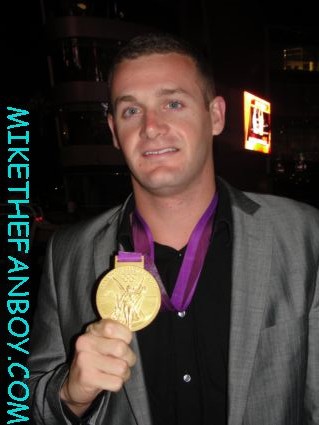 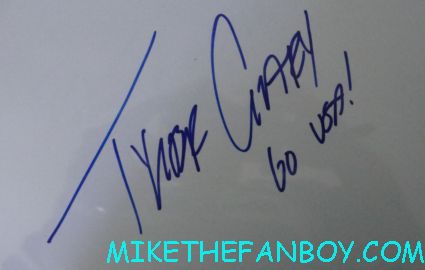 Joy comes over again too, but there’s my girl! ERIKA! Can you sign! We don’t get much of a response, so C.B. adds the fact I’m one of her biggest fans! She smiles and comes over. All I really wanted was another picture, she looked great! C.B. was nice enough to take it for me since I had been having problems doing it myself today, and then she signs for me. I think I kinda Mike the fanboy geeked out on her.

(Editor’s Note: What does that mean, Mike the Fanboy geeked out? Ahem… Are you talking about my Mary Louise Parker geek out… If so… I totally understand! LOL… M-)

But I got a great picture. Notice I’m about 10 shades redder in that picture compared to the other ones! 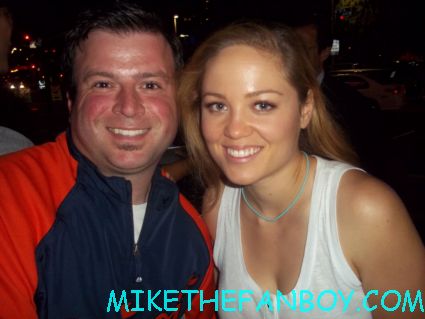 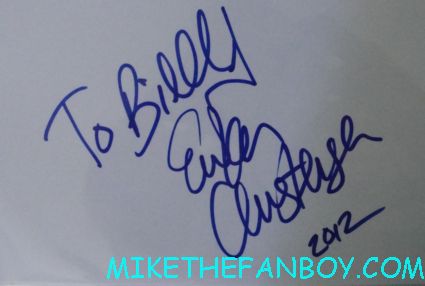 The night is done! I guess Dax and Kristen snuck in the side. What a great night. I didn’t really have any expectations, and ended up with a great night of pictures and graphing. Well, gotta go, it’s Happy Hour somewhere! 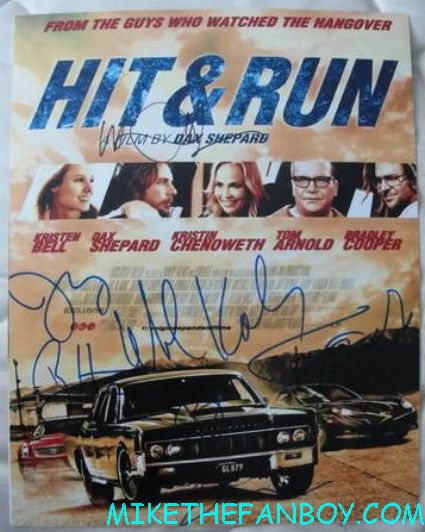