It’s been a while since the world was “normal” but this past weekend Paul hit up The Hollywood Show and had a blast! I was there on Friday and it was nice to see a bunch of old friends and get out.

My thoughts are with David and the organizers of the Hollywood show it was nice to get out and socialize. So arrived around 11am at the Marriott in Burbank
Found street parking a few blocks away. Later found out parking was free for hotel that day. Checked in
Walked past grease cast not really a fan of that film. A little bitter over bowzers cancellation but given the circumstance understood. I arrived at main hall
and my first sight was Tom Arnold who is a pretty swell guy we had a discussion about a charity concert he worked called above ground and his work with the trailer park boys.

Next was a very small selection of extras from Star Trek tos only 50+ talent were on site. Next the scene legend Keith coogan assisting with the steady flow of fans was his wife, Pinky. Keith was pretty happy to catch up
I did asked Kristen if THE FANBOY would in attendance she said he was there Friday. 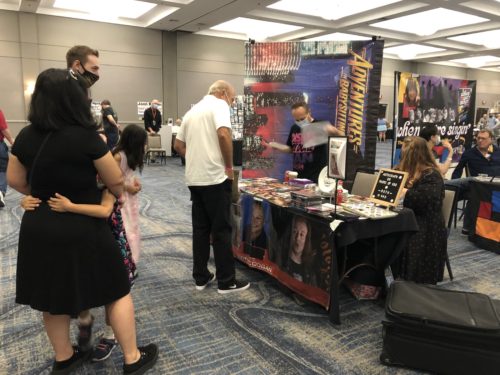 Next I caught up with the owner of the event David, Alright time to spend money.

I’ve always been a big fan of Xanadu and Michael beck has been on the bucket list. His table was mainly warriors items for $60 a signature
I reluctantly paid $40 for a SELFIE masks were removed after we both confirmed vaccination status. He seemed pleasant but the line grew so chatting was restrained. 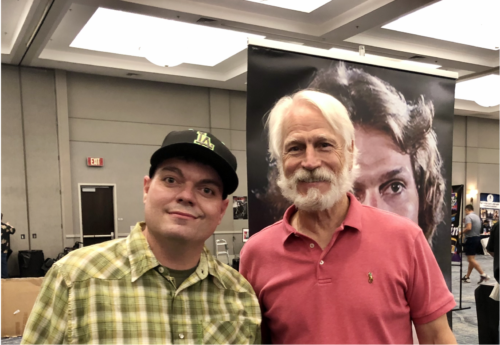 Walter Koenig was supposed to arrive at 12:30 and was only signing his book and no price was listed. His handler was far from pleasant. Next was Bruce dern had a pleasant conversation with him about the burbs and colonial st And of course how fantastic his daughter is. After that I left to the lobby to catch up with a few friends more ghost looks And made my departure there under an hour