Home / Fanboying! / Charles Says, “Come and Knock On Our Door!” After Heading To The Chicago Hollywood Show’s Three’s Company Reunion! Plus Icy-ness From Morgan Fairchild! And An Awesome Nicole Eggert!

The Hollywood Show hit Chicago this past weekend for a Three’s Company reunion and a cavalcade of stars! Charles was on hand as well as his co-cameraman and huge Baywatch fan Justin!

They had a blast at the con but were met with one icy encounter! Doh!

Check out Charles’ recap below!

Greetings, one and all! I’m proud to bring you the first of what I hope will be many submissions. Without further ado, I bring you a review of the Hollywood Show signing event that took place in Chicago last weekend.

Of the roster of some 35 celebrities in attendance, me and my fiancé, Justin, were most excited to meet the cast of Three’s Company (Priscilla Barnes, Joyce DeWitt, Jenilee Harrison, and Richard Kline), Morgan Fairchild, and Nicole Eggert.

The event occupied two rooms, with the cast of Three’s Company in one room with just a few other celebrities and the rest of the celebrities and vendors in the larger room. We attended on Saturday and were pleasantly surprised to find the crowd manageable, not at all overwhelming like these events sometimes can be. There was definitely a fun, positive buzz in the air as we made our customary first lap through to get the lay of the land.

Finally, we decided to dive right in! I decided to visit with Jenilee Harrison first. I have to admit, of all the cast members, Jenilee was someone I originally planned on meeting simply because I wanted her to sign an album she recorded a song for featuring songs inspired by the TV show Dallas (on which Jenilee played Jamie, a Ewing cousin). Being that I had no expectations, I was pleasantly surprised by how taken I was with her. Unlike most encounters where the celebrity is seated until they get up and take a photo with you, Jenilee was out from behind the table, jubilantly interacting with her fans. When my turn came, I was enchanted as she excitedly shared stories and trivia with us, everything from how much the little neighbor girl, Aubrey Anderson-Emmons of Modern Family, just loves to visit and play with the animals on Jenilee’s ranch, to her recommendation to Priscilla Presley on how to calm her nerves (a shot of tequila) should the producers ask Priscilla to make a recording for the album. What a great start to that day’s autograph collecting!

From Jenilee, I moved onto Richard Kline, a very polite, somewhat subdued fellow, who graciously placed his signature on my TV Guide featuring himself, Priscilla, Joyce, and John Ritter. Going right down the line, Joyce DeWitt was just a pleasure, thoroughly enjoying my story of how Justin and I frantically made our way through a local restaurant here in St. Paul, Minnesota after finding out she had just been spotted there.

I would have moved right on to Priscilla Barnes, but the cast got called away to pose for their professional photo-ops. To kill time, we roamed around a bit when, all of a sudden, we were approached by Athena Massey, a stunningly beautiful actress that, unfortunately, neither of us had ever heard of. She was curious about the large, inflatable object Justin was carrying around, which he explained was a take on the rescue cannons carried by the lifeguards on Baywatch. This was a great lead-in for Athena to tell us more about herself and her career, but in the most charming, non-intrusive way possible. Before moving on, Justin told her he would definitely look into more of her work. Glancing down at a banner highlighting some of her noteworthy credits, he became giddy from the discovery that she appeared on Seinfeld, one of his all-time favorite shows, as a girl Jerry dumps twice (her last offense being that she ate her peas one at a time). Still wanting to move on, he told her he might just be stopping back!

Eventually, we made our way to Nicole Eggert, of Charles In Charge and Baywatch fame. Miss Eggert was another delight of the day. She thoroughly basked in the enthusiastic attention Justin bestowed on her, even making each other laugh in the process. Nicole was genuinely thrilled to talk about the various projects she’d been involved in outside of her more noteworthy body of work, and she couldn’t have been more excited to sign his rescue raft. In addition to posing for a picture with Justin and the raft, she took some pictures of it for herself and even posed with us for a selfie using her camera. In the middle of this really genuine moment, the oddest thing happened. Nicole leaned into Justin, whispered something, and he walked away quickly! When I caught up to him, he had the biggest smile on his face. What could she have possibly whispered to him? A phrase that we will no doubt repeat to each other with a giggle every now and again for the rest of our lives: “Run before they charge you.” 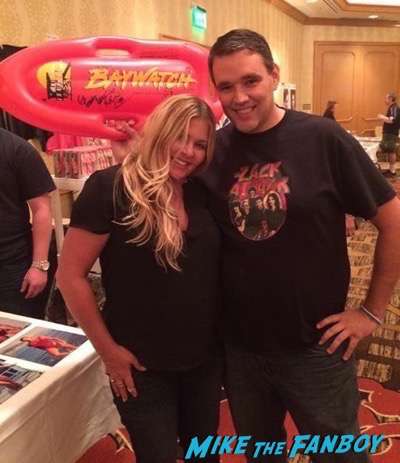 Considering Nicole Eggert had generously saved him some cash, Justin decided to walk right back over to Athena Massey to get an autograph and a picture with her. I found it remarkable how Athena managed to make a fan out of someone who hadn’t even heard of her before attending this event simply by using good old-fashioned, tried and true sales techniques and a whole lot of genuine charm. 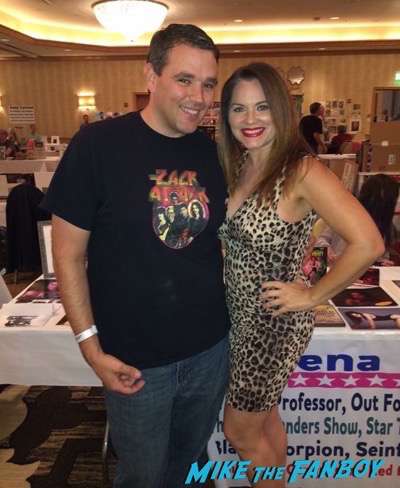 After the high of the two fantastic encounters Justin had, I marched in the direction of Morgan Fairchild, excited to keep our trend of positive interactions going. I wouldn’t say I had been a major fan of hers, but I’ve certainly always appreciated her status as a pop culture icon appearing in numerous projects over a forty-plus year span, never being completely defined by one role, but mostly playing some variation on the rent-a-vixen archetype so essential in any drama in any decade (oh, and she played Chandler Bing’s mom on Friends). When I arrived at her table, there was one fan ahead of me. When he left, I stepped right up, presented her with another vintage TV Guide I had featuring Morgan, Nicollette Sheridan, and Terry Farrell during the run of the glitzy, short-lived primetime drama Paper Dolls, and was met with what can only be described as an icy reception. This was to be strictly business. Sensing this, I immediately shut down to the point where it completely escaped me to have her sign in silver right below her head and definitely not in black over the headline touting “What’s New in Video Bargains.” After the damage had been done, all that was left to do was to pay up and have our picture taken, my one splurge on having a picture taken with someone. I wish now that I had opted for Jenilee Harrison instead. 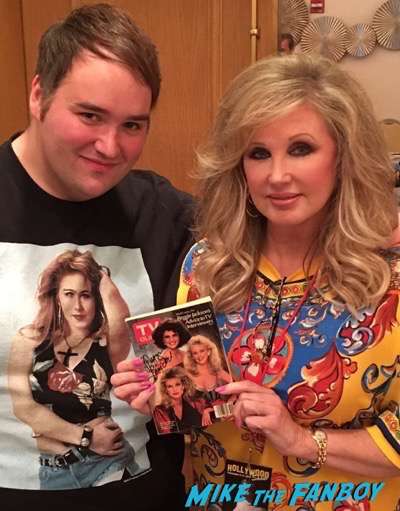 After leaving Morgan Fairchild behind, I had but one mission left, and that was meeting Priscilla Barnes to round out my Three’s Company TV Guide. The buzz was still pretty prominent in the room holding the cast, but there wasn’t too long of a wait until Priscilla became available. Sitting there in her dress bespeckled with cherries, which she beamed made her very happy, she was only too happy to complete my collection of signatures. As she signed, she listened empathetically as I recounted how, as a kid, I was moved to tears by her debut episode of Three’s Company in which she breaks down after the cruel and embarrassing things Jack does to her character in an effort of getting rid of her as a roommate. 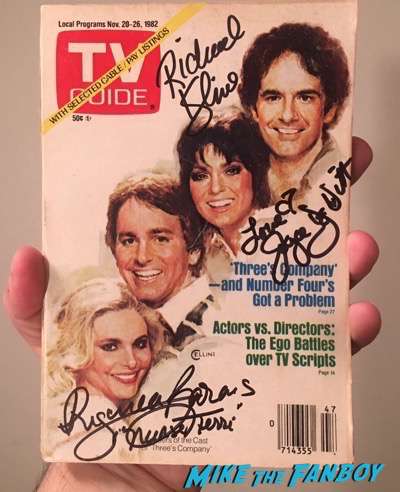 Having made the rounds and collected all the signatures that we came for, we decided it was time to go…but not before saying a final goodbye to the bubbly Jenilee Harrison, my new favorite Three’s Company cast member!