We are all so sad to hear about the passing of TV Legend Mary Tyler Moore.

There was a taping of Hot In Cleveland a couple years back and Russell was able to go and low and behold it was the Mary Tyler Moore Show reunion taping!

He got to see the reunion first hand. He was nice enough to do a little recap of the taping as well as a taping of TV Land’s The Exes…

Plus, he got more than a little fortunate with a cast signed script!

Spring Break 2013 turned out pretty well for the family. Had some time for fanboying during the week as well so life ain’t that bad.

Wednesday – My wife and younger son love “The Exes” . The show stars Kristen Johnston, Donald Faison, Wayne “Newman” Knight, David Alan Basche and Kelly Stables. Got some show tickets easily (heard they actually pay people as well) which is filmed at CBS Studios. Being that it was my first time there and due to my fears of LA traffic, we got there exactly at 5pm. There didn’t seem to be much of a line so I was not worried. So basically like any talk show it had no cameras and cell phones allowed and they must be checked in or you have to bring it back to car. I did bring some cast photos as not really sure what to expect as far as after show autographs, but you have to try and be prepared. 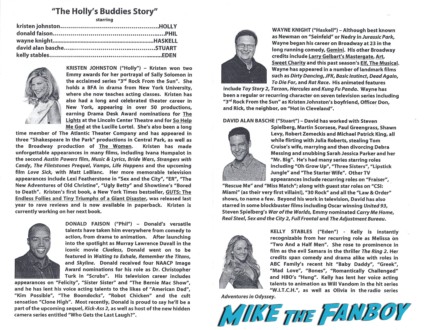 The show was loooooong and lasted about close to 4 plus hours and after a ½ sandwich and some water that they provide and the warm up guy pulling various people up there to do their pole dancing routines, I was tired. Kristen Johnston was hilarious and was very engaging with the audience during the breaks and so was Donald Faison as he danced and did the “worm” for us.

After the show I went up to the edge while everyone was miggling around and called to the actors/actresses individually and each came over and was very engaging. 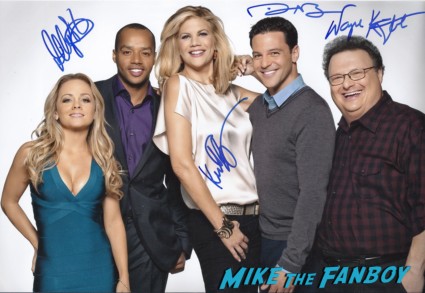 Wayne Knight was super engaging and we chatted about his Broadway play he had just finished. No one else had thing to sign other than the programs but it was a lot easier than I thought. 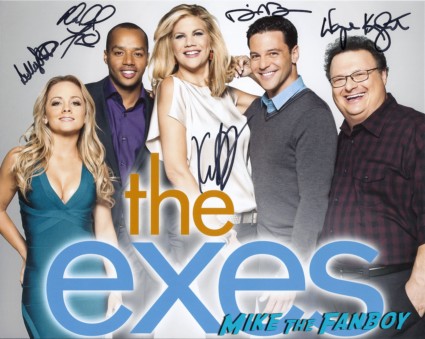 Thursday – Stopped by the Jay Leno show area after lunch with my Uncle and Aunty to see if we could get Eva Longoria. Met CB there as he recognized me from the “Fanboy” site and he had the same Maxim magazine I had wanted to get signed. I also had something for Terry Crews but not a biggy as have gotten him a few times at Comicon. 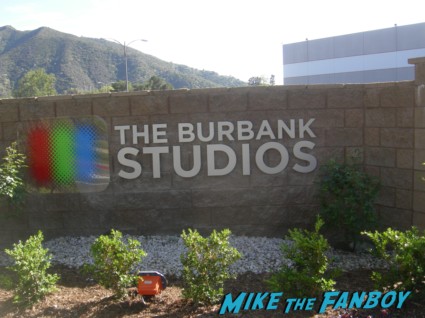 Anyway, long story short while everyone was looking for an SUV, Eva came out in a White Hyundai and we barely saw her and by the time she passed us and made the left turn it was too late. CB tried running valiantly to try and catch her, but even Hyundai’s can move faster than humans. Oh well we tried. 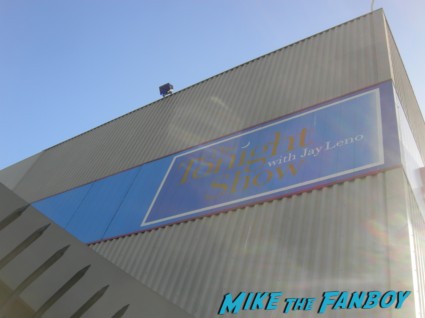 Friday – This was the day we waited for as I had lucked out and had gotten some tickets to the “Hot in Cleveland” show on the day it was announced that there was going to be a Mary Tyler Moore Reunion. I grabbed six and had extras so pinged Mike to see if anyone wanted the extra 2, but I guess no takers.

As a child of the 80’s we grew up on Mary Tyler Moore as the girl who could turn the world on with her smile. It was classic TV and the characters were great. So when Valerie Harper was diagnosed with terminal brain cancer this prompted a reunion type of show and with Betty White and Georgia Engel on the Hot in Cleveland show already it made sense to do it on that show. I’ll admit too that I had a childhood crush on Valerie Harper (along with Victoria Principal, Donna Dixon, Phoebe Cates and Loni Anderson).

So on the day before the show I got an email attached basically telling us it was not a guarantee to get into show (and there is no guarantee anyway), but because of the various guests and requests that have come in there would be little room for the public. So now the plan is to get there as early as we can for the 5pm taping and based on my son’s class schedule end up getting there at 12:15pm and are number 14 in line (the people that were in first in line got there at 7am..ouch). 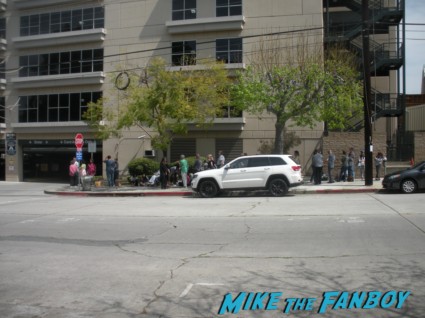 The people in line were “veterans” of going to these shows and were not optimistic in anyone getting in at all. They said it is unusual to have this line outside and their “sources” said at most there would be maybe 10 or so people let in. Anyway all you can do is try and as you learn in life, all good things come with patience. 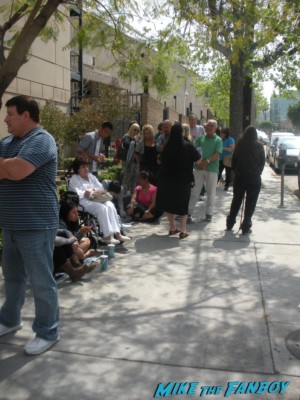 3:00pm – Cars can now begin parking in the structure so there were a line of cars waiting to get in and most people that were lucky had at least 2 so one could remain in line and other park in garage (my older son parked the car). The security guard led us through the garage and to the metal detectors (no phones and cameras) and into the holding area benches. 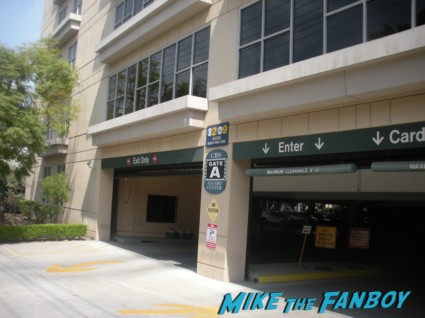 At the benches one of the CBS people started checking IDs and tickets then handing out a number. Heart was pumping as my younger son is only 16, but I calmly told him that we rushed from the hotel after flying in this morning and he forgot his wallet. I think he believed me just because my drivers license didn’t have a Southern California city on it (thank God as not sure what we would have done). So we got numbers 13-16 (I think someone got out as he had to park car and long story short, he couldn’t get a ticket). The opposite side of our line was another line that had a special list of invited VIP’s and they were being checked off and got to go in first. It would be tight as that line had at least 110 people when I counted and heard it was about 150 capacity and there were still more people arriving.

4:00pm – They begin counting and stop at 21 so we are in barring any late shows!! We are led through the lot and right before we get led into the stage set I see a door ajar and see Mary Tyler Moore herself sitting down and putting on makeup. 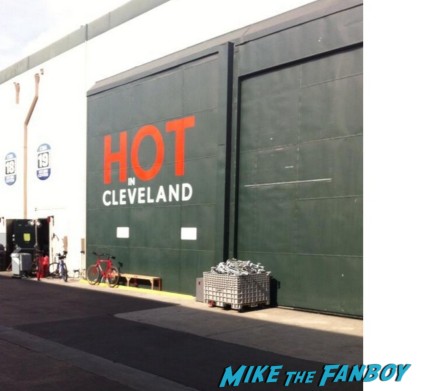 5:00pm – So on our chairs is the program and its in think parchment paper (The Exes was just on regular copy paper) and the warm up guy comes out and starts entertaining. 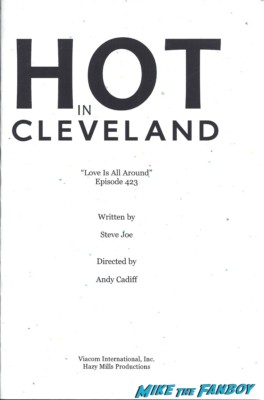 5:15pm – The tapings begin and they introduce the main cast of Valerie Bertinelli, Betty White, Jane Leeves and Betty White.

Anyway, I won’t go into the show itself but I think most know it surrounds a reunion of Betty White’s character and Georgia Engel’s character in getting together their old championship bowling team. You should have heard the cheers when Valerie Harper, Cloris Leachman, Betty and Georgia entered to do the first bar scene. I admit I lost it and shed tears as it was a very surreal moment that was never going to happen again. Then the next scene when Mary Tyler Moore was introduced (she plays Diane) was even more thunderous.

The tapings continue and there is the usual forgetting of lines (Cloris) and Betty White is still sooo sharp that she is reminding others of their lines. You could tell MTM had it the worst and most of the tapings was of her sitting down as she really looked shaky standing (she has been fighting diabetes for years) and probably looked the worse of all the old cast. One great moment was doing a “Name that tune” contest and one of the themes was the “Golden Girls” and everyone must’ve heard it on stage and they all broke out into full blown singing mode. Really sad to see time pass before your eyes knowing that we aren’t those little kids anymore tuning into see what was happening in the newsroom. 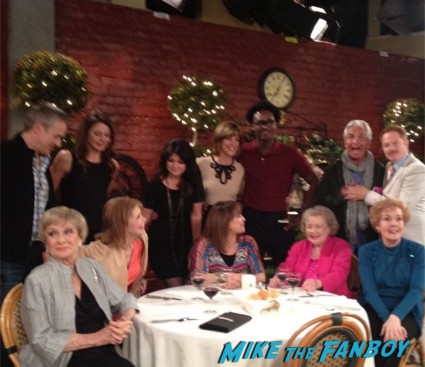 After the show there were hugs all around and I had some pictures I brought and leaned over the railing to try and get someone to come over, but there was too much commotion. A woman did notice me doing such and I told her if any of them that were going to come over and of course she didn’t think so. She did say to send her a note and she would try and get something signed.

Anyway, my wife and I left the show pretty drained after 3 hrs. I think my kids understood the “moment” and hopefully one day will watch a lot of the MTM shows and reflect back on it with their kids as well.

So we decide to go downtown to eat at “The Pantry” and as legendary as it is the food is just so so (that garlic bread is good though) and then decide to hang out by Staples as the Laker game is over and there are people hanging out on Friday and guess who we run into….D-Howard. He and Kevin Durant are probably the best A list signers in the NBA (take note Kobe and Lebron) and is always engaging. He is cool and he signs the magazine we had in our bag (yes we carried a Kobe and Dwight mag as you never know who you run into) and I said “Do you remember our conversation at Comicon when I told you to join the Celtics (I am a big Boston fan)….told you!”. He laughed and I know he remembered me as he said he might have to play in China (the NBA was about to go on strike). Anyway, wish it was Kobe as we have Dwight on a few items already, but beggars can’t be choosy. 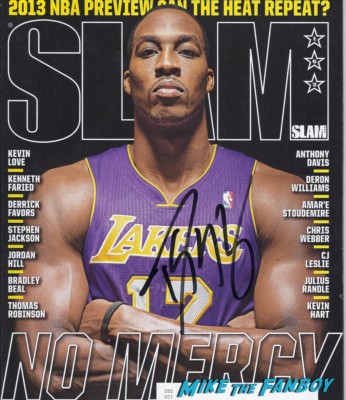 Speed up 2 weeks later as I had sent a self addressed stamped envelope to that woman on the set at CBS when I got back and through a random act of kindness look what she sent back!! 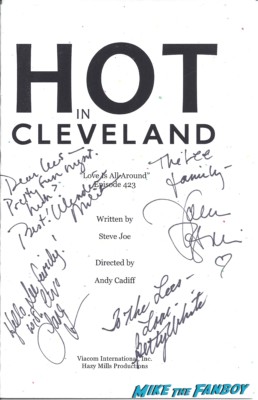 A had also corresponded with Valerie Harper’s publicist that was there at the show and he said that he saw me and he said to send the program to him as well and he sent back a great signature of Valerie as well as a signed book. 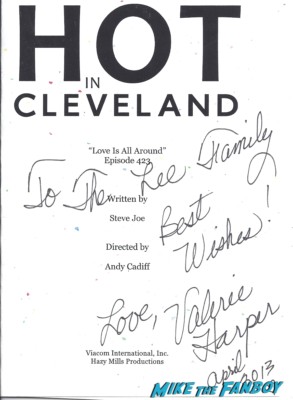 Pretty cool vacation due to people going out of their way.